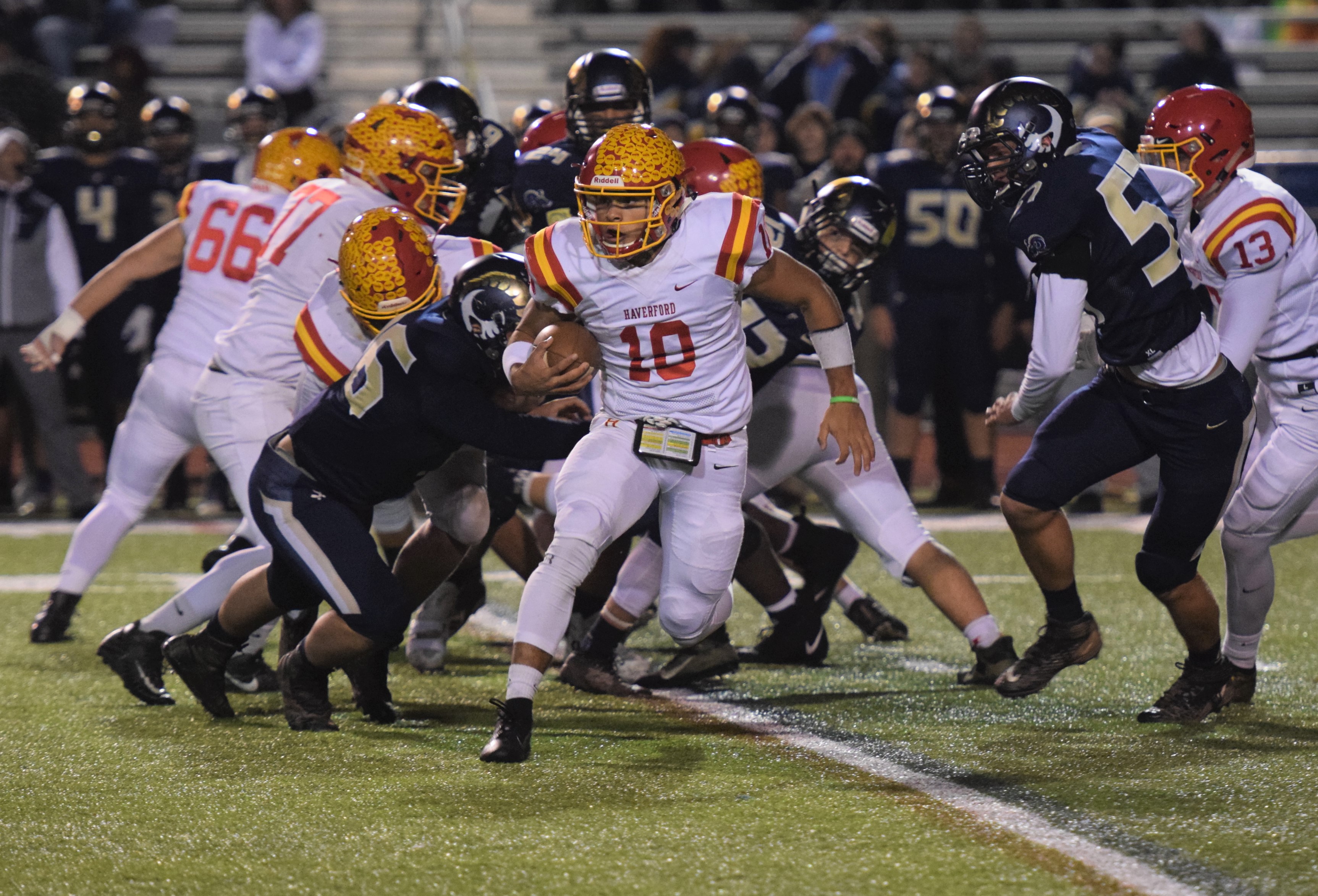 ROYERSFORD >> They knew what was coming, but they were powerless to stop it.

On Friday night, Brubaker’s fears were realized as Blair, a do-everything superstar listed simply as “Athlete” on 12th-seeded Haverford’s roster, rushed for 311 yards and accounted for five total touchdowns in the Fords’ comprehensive 49-14 defeat of 5th-seeded Spring-Ford at Coach McNelly Stadium.

It’s the first district playoff victory in program history for the Fords, who finished second to No. 3 seed Garnet Valley (also victorious Friday night) in the Central League this season.

But the big story was Blair, a University of Buffalo commit, who came into the contest with 1,266 yards on the ground plus 17 touchdowns in 2019, at an average of more than 11 yards per carry.

Those numbers certainly didn’t suffer on Friday, as Blair scored on runs of 73, 43, 63, and 88 yards, adding a 61-yard touchdown pass to Justin Burgess for good measure as the Fords raced out to a 35-0 halftime lead.

“Obviously, it’s a special night,” Blair said after the game. “In practice this week, we’ve had a mentality that this would be the year we got that first playoff victory.”

Haverford quarterback Trey Blair (10) hands the ball to the referee after his second touchdown against Spring-Ford. (Austin Hertzog – MediaNews Group)

The fact that it is the school’s first-ever playoff victory comes as something of a surprise to anyone who’s watched the Haverford program over coach Joe Gallagher’s 28-year tenure, but the 2019 team will always hold that special distinction.

“Honestly? It’s kind of shocking to me too, that this is the first playoff win,” admitted Blair. “We’ve had some great teams over the years, and (Gallagher’s) a tremendous coach.

“As a community, we’ve been waiting for this for a while, and it’s a really special night.”

It isn’t that Blair is a one-man show for the Fords – far from it. Tailback Chasen Wint added 123 rushing yards on 11 carries and scored twice, while the Central League’s top defense (second in District 1 Class 6A during the regular season behind Owen J. Roberts) kept explosive Spring-Ford off the board until midway through the third quarter.

What was most amazing was the different ways in which Blair was able to affect the game. His fingerprints were on each and every element of the historic victory.

Blair was back to return the opening kickoff, but only made it as far as his own 27-yard line. That meant he’d have to wait for the first offensive snap to make an impression, carrying off left tackle on the game’s first play for 73 yards, outrunning the entire defense for a 7-0 lead just twenty seconds into the contest. He would add a 43-yard scoring run just two minutes later, giving Haverford an early 14-0 advantage.

When the Spring-Ford defense was able to kick Haverford off the field on a three-and-out, it was Blair who’d drop back to punt, delivering the first of his three punts on the evening for an average of 25 yards per boot.

Aiden O’Neill (4) tries to get a grasp on Spring-Ford quarterback Ryan Engro in the backfield Friday. (Austin Hertzog – MediaNews Group)

Ryan Engro and Nick Teets provided a good piece of Spring-Ford’s early offense, moving the ball via quick screen and hitches, but Spring-Ford’s first chunk play came on a 4th-down Engro scramble that gave Joe Brogan time to get open along the sideline and take the reception to the 10-yard line.
The drive stalled out, and the Rams attempted to get on the board via a short Grant Sillyman field goal – but the attempt was batted away by a fast-converging Ford off the right side of the line. You guessed it – Trey Blair.

“I’ll play anywhere – I know there are different ways I can help the team, and I like contributing in different areas,” the senior said.

Three plays later, Blair found Justin Burgess down the right sideline for a 61-yard score and a 21-0 Haverford lead.

Blair capped off his monstrous half with an 88-yard sprint for his third rushing TD of the half. Just before halftime, Haverford tailback Wint carried 63 yards for a score and a 35-0 lead, sending the second half into running-clock territory.

Spring-Ford’s first bright spot came at the start of the second half, when Dante Bonanni’s leaping grab against Blair – playing corner for the Fords’ defense – gave the Rams a first down in the red zone. From there, Engro would take a keeper over from five yards out to put the Rams on the scoreboard at 35-7.

But Blair would respond with yet another long TD run and punctuate his evening with an interception and return of about 60 yards inside the Spring-Ford 5 near the end of the third quarter. Wint finished the drive with his second rushing score.

Engro found Josh Hellauer for a nine-yard score late in the fourth quarter to make the final margin 49-14.

“I haven’t seen many players who do more for their team than Blair,” said Spring-Ford coach Brubaker. “But they were stronger – we got manhandled. It’s a struggle, getting to this point each year and running into stronger teams. We’re tired of this happening; the kids are sick of it. That’s why we’ve made a commitment to hiring a strength coach, getting a new weight room.”

The Rams’ Pioneer Athletic Conference championship season comes to an end at a mark of 8-3. It’s not the ending Brubaker and his group wanted, but only one 6A team in the state will get the ending they truly desire.

“This is a successful season,” said Brubaker. “Liberty Division champions, PAC champions … every one of these kids is a credit to this school district and to their families. I’ll coach kids like this any day.”

Engro closed his high school career with 183 yards passing, and another 46 on the ground, scoring one Spring-Ford touchdown and passing for the other. Bonanni had six receptions to finish with 54 on the year, expanding his school records in several receiving departments, while Armante Haynes carried 13 times for 36 yards. Blake Terrizzi added a sack on defense.

The Fords (9-2) will advance to next week’s quarterfinals against the winner of Saturday night’s Downingtown East/Perkiomen Valley contest. But Haverford won’t be content with simply being the first team in school history to win a district game.

“Every game from here on out, we’re the underdogs,” said Chasen Wint. “We know what we can do, and we have this guy (nodding to Blair) on our side.”

The Fords made it clear on Friday they’re much more than the 12th-best team in the district – but where will they ultimately end the season?

“Any team we play from here on out is going to be tremendous,” said Blair. “But I honestly don’t think it matters who we play – we’re just going to go hard, do our thing. Hopefully, we keep playing like tonight.”

District One Class 6A Playoff Game

Bishop Shanahan advances past Pottsgrove to first District 1-4A title game
Brian Dresnin, Plymouth Whitemarsh run all over Abington in District 1-6A first round