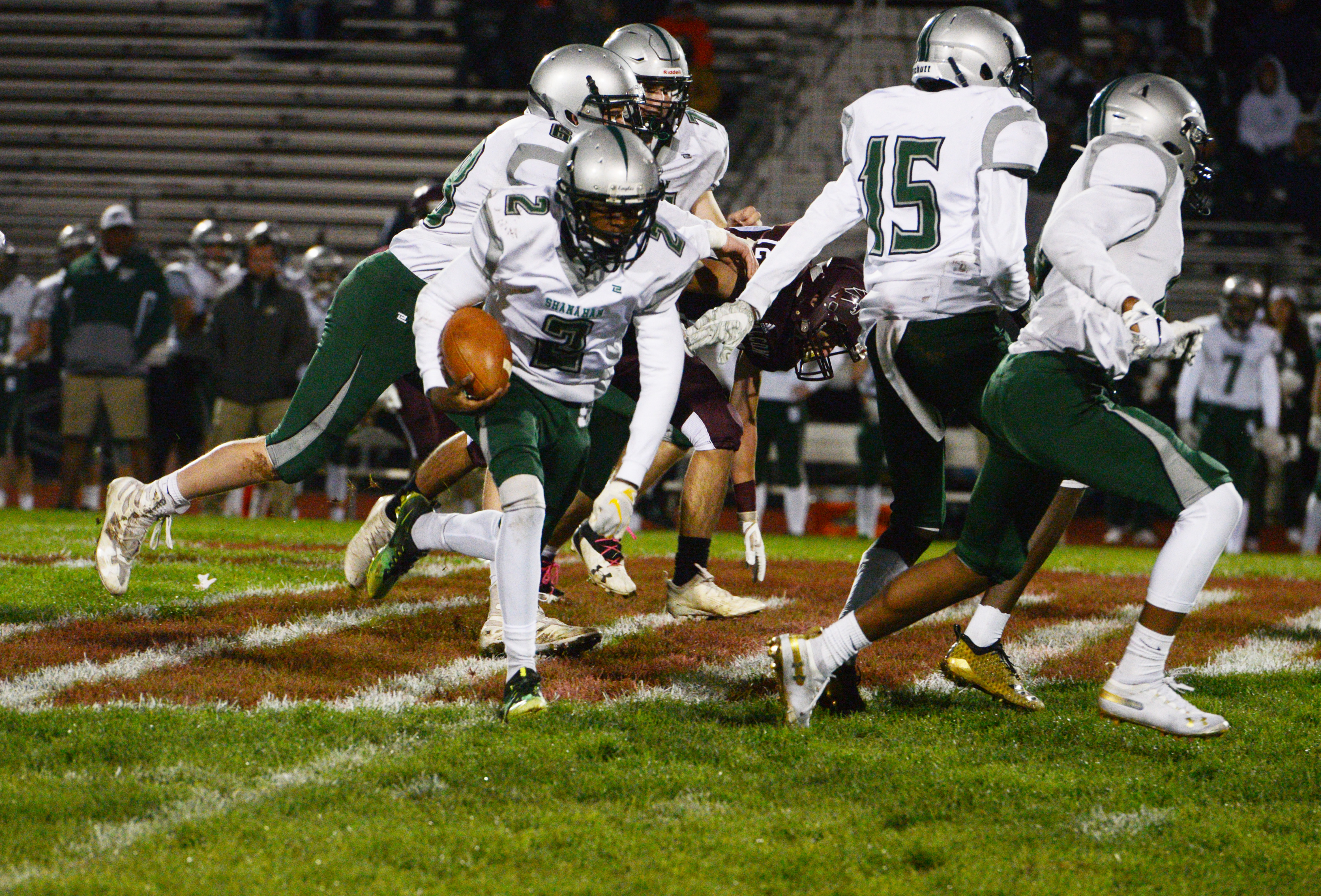 POTTSGROVE >> Cooper Jordan admitted there were some nerves heading into his first district playoff game.

All it took for the Bishop Shanahan sophomore quarterback to quell them was a 69-yard touchdown run on the third play of Friday’s District 1-4A semifinal against Pottsgrove.

The play set the tone for the rest of the night as the third-seeded Eagles scored 42 first-half points in a 56-24 win over the second-seeded Falcons, ending Pottsgrove’s run of three straight district championships and sending Bishop Shanahan to its first district title game, where it will face the winner of Saturday’s game between Springfield-Montco and Upper Moreland.

.@BSHS_Eagles_FB sophomore QB Cooper Jordan led the Eagles to their first district championship game Friday. Here he is on the win: pic.twitter.com/T0S9xvu2nC

Jordan completed 11-of-14 passes for 251 yards and three touchdowns and added 81 yards and a touchdown on the ground, most of which came in the first half, to help lead the Eagles to the historic win.

“I was kind of nervous coming in,” Jordan said. “But once that first drive was over with, I knew we could win that game.”

Bishop Shanahan’s roster is filled with youth, featuring 26 sophomores compared to 11 juniors and 15 seniors. However, the Eagles’ upperclassmen were vital in avenging last season’s 14-13 loss to the Falcons in the district semifinals, something Jordan said they reminded their younger teammates of throughout the week.

“In my opinion, he was probably the player of the game tonight,” Jordan said of Glendenning.

Shanahan’s senior class is most prominent on the offensive and defensive line, where Anthony Cipriano, Lenny Kresefski, Vincent Guriera, Jacob Dyke and Jack Lyons helped the Eagles (6-5) churn out 232 yards rushing and bottle up the Falcons (5-6) for 23 yards on the ground.

“That’s what we keep saying all year, ‘We want to do it for our seniors,’” Shanahan coach Paul Meyers said. “They’re the backbone of this team. They’re the guys that win it in the trenches, the front line. We’re hoping we can get that for them, the first district championship in school history.”

Pottsgrove found itself in a 21-0 hole with 8:39 left in the first half after Jordan hit DaKendrick Daniels for a 17-yard TD pass. Each time the Falcons tried to dig into the deficit, the Eagles had an answer.

Vinny Scarnato returned a kick 84 yard for a touchdown to cut the lead to two scores following the Daniels touchdown. Two plays later Jordan hit Glendenning in stride for an 88-yard touchdown pass.

Falcons’ senior quarterback Joe Silvestri, who finished with 138 yards passing and two touchdowns, hit Parker Janusek for a 55-yard touchdown a minute after Glendenning’s score to make it a 28-14 ball game with 7:13 left in the first half. Shanahan senior Jon Loftus rumbled into the end zone with 1:11 left in the half to push the Eagles’ lead back to three scores.

Rylee Howard returned the kickoff into Bishop Shanahan territory to set up a Luke Kaiser field goal with just 14.8 seconds remaining in the half. Shanahan returned the ensuing kickoff to the Pottsgrove 25 and Jordan hit Choi in the end zone for a touchdown on the last play of the half to put the Eagles ahead 42-17.

“We knew they had a very good offensive line,” Pottsgrove coach Bill Hawthorne said. “They just really beat us in all phases of the game. It was a humbling defeat. I give all the credit to Coach Meyers and his staff. We have to regroup this offseason, and we will. We’ll be back. I just didn’t want to see the seniors go out this way. They didn’t deserve that.”

Silvestri led the Falcons on a touchdown drive on the first possession of the second half, dumping the ball off to Howard for a 27-yard score, but that would be it for Pottsgrove’s scoring. Bishop Shanahan controlled the clock and added touchdown runs from Choi and Glendenning in the fourth quarter to finish off the win.

The Eagles’ defense held Pottsgrove to negative nine yards rushing before the Falcons picked up some chunks on their final drive of the game. Cipriano tallied four sacks, while Dyke added another.

Max Neeson led the Falcons with three carries for 16 yards, while senior running back Isaiah Taylor, who came into the game leading the Pioneer Athletic Conference with 1,331 yards was bottled up for seven yards on 11 attempts after thrashing the Eagles for 148 yards in the first half alone in last year’s game.

“We all fought hard,” Cipriano said. “We all ran to the ball, we all hustled to the ball carrier. We all played hard. There’s still room for improvement. We still can improve, but we all played hard, we battled and we gave it our best effort.”

Pottsgrove returned just two starters on defense and six on offense this season. The Falcons rebounded from a 1-3 start to win four of their next five before closing the season with losses to Perkiomen Valley and Bishop Shanahan to finish below .500 for the first time in recent memory.

Silvestri, Taylor and the Falcons other seniors depart Pottsgrove with three PAC Frontier titles and three district championships during their time at the school.

Hawthorne said the likes of Taylor, Silvestri and the rest of the senior group, including Max Dopwell, Darrian Seaman, Zach Van Horn, Nick Bush, Evan White, Aamir Mapp, Charles Sithens and Messiah Smythe were vital in keeping things from spiraling out of control in a difficult year for the program.

“This senior class, they’re a monumental class in this program,” Hawthorne said. “They’re going to bridge the gap to some successful years ahead. It was already a tough year, but they really held it together. They gave me their all, and that’s all we can ever ask. They gave it their all every day in practice and every second of every game.”