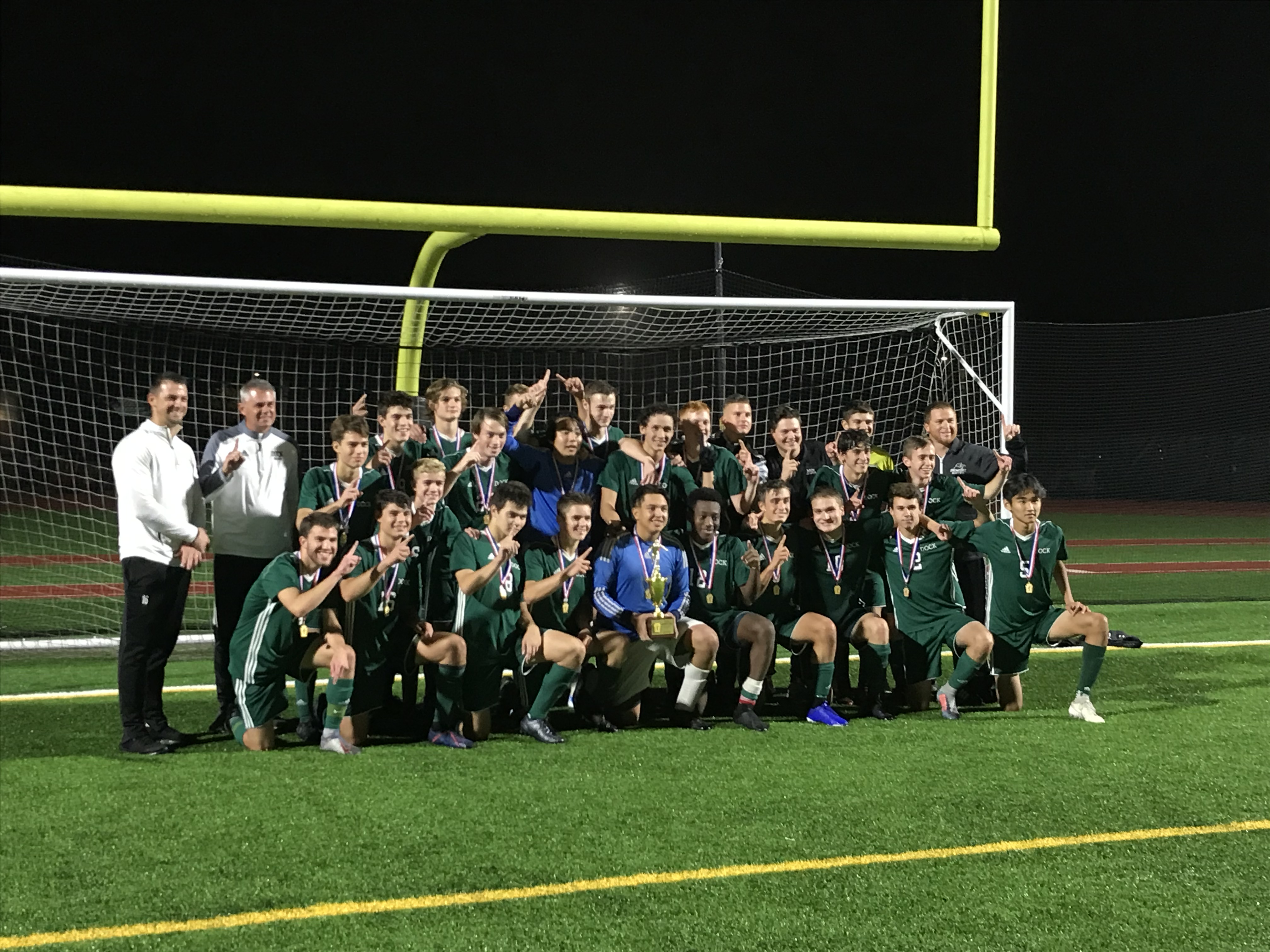 The Dock Mennonite boys soccer team takes a picture after its 2-1 win over Delco Christian in the District 1-1A final on Wednesday, Oct. 30, 2019. (Mike Cabre/MediaNews Group)

DOYLESTOWN >> Thomas Schreiber had no plans to play overtime.

“Here’s the thing — we’ve done the overtime several times, it’s very stressful,” the Dock Mennonite senior said. “We just want to get it over with, get that win and go home happy.”

With the clock ticking down in regulation and Wednesday night’s District 1-1A boys soccer final still even at a goal apiece, Schreiber made sure an extra session was not necessary. Knocking in a Ben Lare cross was just 17 seconds remaining, Schreiber secured Dock’s first district title in a decade as the second-seeded Pioneers rallied for a 2-1 victory over No. 4 Delco Christian at Central Bucks West’s War Memorial Field.

“We knew going into this match their last game they went into overtime with Faith (Christian), had some success with that,” said Dock coach Matt Moyer of the Knights’ penalty-kick semifinal win. “So we wanted to create an opportunity in regulation that would put us ahead. They’re a tough team, well coached, so we wanted to win that in regulation, not go deep into overtime or PKs.”

BOYS #SOCCER: 0:17 seconds 2H @DockMennonite 2, Delco Christian 1. Thomas Schreiber gets to a Ben Lare cross in the box & knocks it in for the go-ahead goal in the 80th minute of the District 1-1A final. pic.twitter.com/7zDE9Gjm71

Delco Christian, making its first district final appearance since 2011, took a 1-0 lead with 27:23 left in the second half when Micah Metricarti scored on a breakaway. But Dock pulled even less than six minutes later on a Braden Landis header. The Pioneers then avoided going to OT for a second time this season with the Knights — Dock won 1-0 Oct. 13 —  on Schreiber’s tally, the result of pinning the ball in the Knights’ half after a late free kick.

“It’s heartbreaking in many ways,” Delco Christian coach Rob Atkins said. “One of the things we talked about at the beginning of the game was the things that are worth most in life require skin in the game. And when you put skin the game, the cost — if there’s failure — is a lot so it hurts. And so these guys, there’s great lessons to be learned, Great effort from both sides, tough loss at the end though.”

The district crown is the first for Dock (17-4) since 2009, the same season the Pioneers claimed the last of the program’s four PIAA championships. Dock opens this year’s state 1A tournament Tuesday against District 12 champ Devon Prep at a site and time to be announced.

BOYS #SOCCER: @DockMennonite receives then celebrates with the District 1-1A championship trophy after defeating Delco Christian 2-1 in the district final. pic.twitter.com/ia1F33aENi

Schreiber threatened to break the 1-1 tie moments before he actually did, getting into the box off a pass from Landis but the ball was knocked away. The Knights, however could only clear to midfield, where Dock’s Aiden Kelly gathered possession and sent a diagonal ball to the right side that Lare tracked down. Lare proceeded to put a cross into the box for Schreiber, who ran onto the pass and touched it in by outcoming keeper Josiah Bronkema and into the net.

“We’ve been practicing that in practice so it was a play that we sort of knew,” Schreiber said. “And I saw Ben go there for the cross, I went in to try and score.”

Delco Christian earned a free kick in the last seconds but the clock ran out with the ball in the air sailing wide right of the goal.

“It just feels amazing,” Landis said. “Delco, they’re a great team, they’re great competition but we fought ‘til the end, we came back. It was a great game.”

The Knights had the best scoring opportunity in an even first 40 minutes, Jason Woo finding Metricarti with open space in the box for blast denied by Dock keeper Reynaldo Ramos with Delco sending a second-chance shot off the rebound high.

Dock Mennonite began exerting more control after the break but it was Metricarti who finally ended the scoreless tie on a counter after a Dock free kick sent into the Knights box. Metricarti beat a Pioneer defender for a Woo pass, raced into free space before getting by another defender and sliding a shot into the left corner with 27:23 remaining.

“Micah is made to do what he did there,” Atkins said. I mean that’s his forte. He’s strong and has speed and when he’s one, he’s one and it was just a great counter.

Landis headed a free kick on goal but the effort went right to Bronkema. The Dock senior, however, would not be denied in the game’s 59th minute. Kelly worked on the right flank to gain open space and crossed a ball to the front of goal where Landis rose up and put his header into the right side of the net at 21:51.

“I just saw Aiden in space,” Landis said. “I stared making a run and I just jumped up — went in.”

Looking for a second goal to break the tie, Dock sent a pair of shots high while a Ralph Saint-Fleur header in a crowd off a throw-in was bobbled for a brief moment by Bronkema before the Knights goalie corralled the ball. Dock’s comeback finally was complete in the 80th minute when Lare connected with Schreiber.

“Our boys have done that all year,” Moyer said. “They have the will to fight back. Just a great group of boys that are playing for each other. I mean, it’s a complete team. I’m super proud of them. But credit to Delco, they played a fantastic game and so credit to the work that they’ve done.”