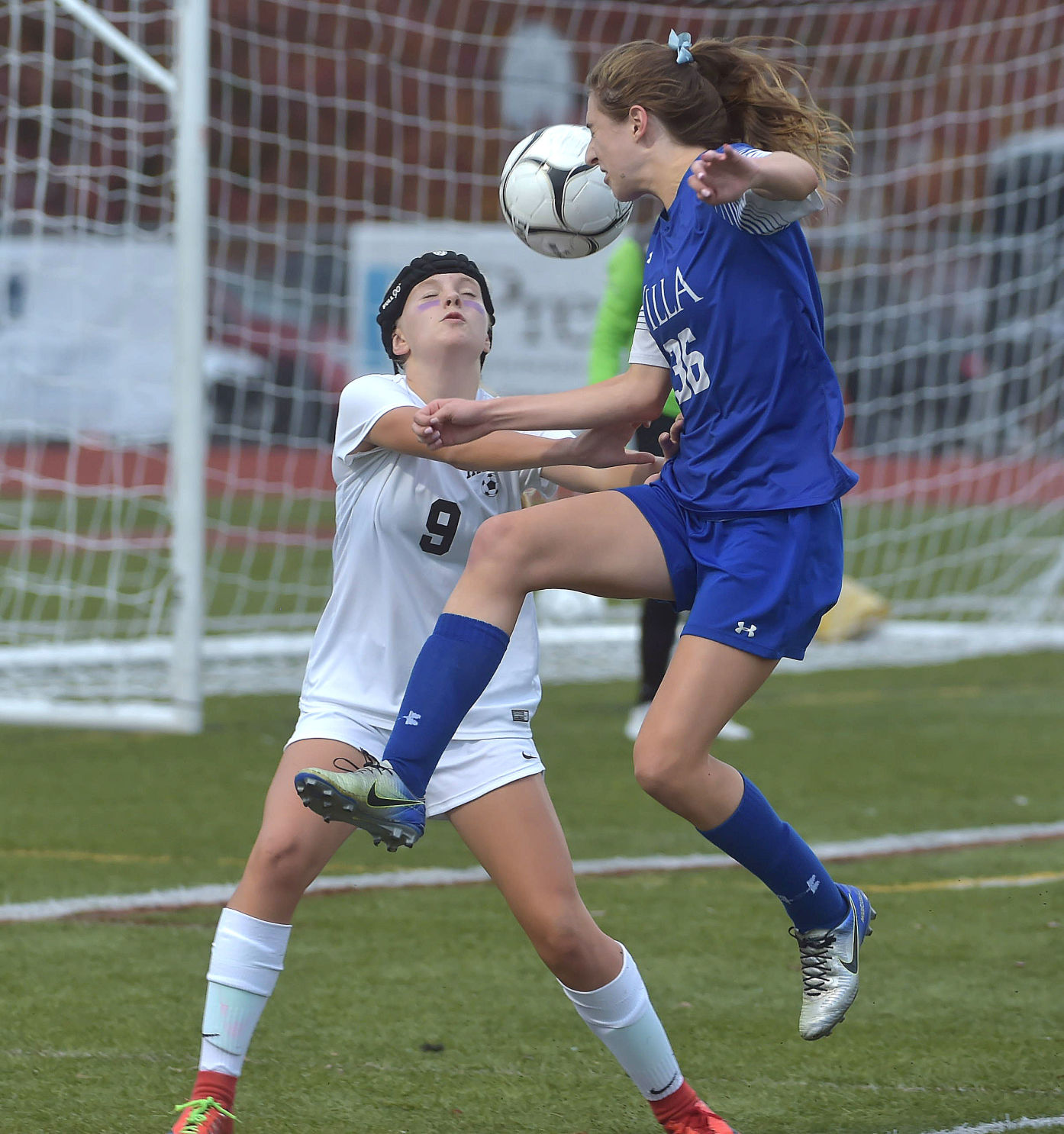 PHOENIXVILLE >> The elder half of the Strath Haven center-back pairing is a sophomore who didn’t play varsity as a freshman, and has the scar and rattling knee brace to prove it.

The greener half is a freshman who has to sheepishly admit that this is the first time she’s played center back for a team full-time.

That inexperienced pairing’s job Wednesday night was fairly straightforward: Just keep many-times reigning District 1 Class 3A champion Villa Joseph Marie off the scoreboard, and by the way, do it on less than 24 hours’ notice in a tumultuous week at the school.

“It was really hard,” sophomore elder statesman Dahlia Kuzemka said. “We knew they were a really technical team coming in, and we did our best to try to shut them down. We really tried to cover for each other, but they were a good team.”

For 58 minutes, the Panthers relented just an own goal. But Villa Joseph’s control of possession – and a little late score running-up – padded out the final margin to 5-0 at Phoenixville Wednesday, continuing the Jems’ hegemony over District 1 Class 3A.

The challenge was always going to be daunting for the Panthers (12-8-1), who secured their place in the PIAA tournament via a 2-0 win over Nazareth Academy Tuesday night. That game was postponed a day due to the death of Strath Haven junior Hallie Jackson Monday, and the Panthers were late getting to Wednesday’s game after a bomb threat on the building delayed their departure.

Strath Haven’s (14) Maggie Forbes moves across midfield as Villa Joseph Marie’s (5) Emily Borell defends in the first half of the District One 3A fina at Phoenixville High School Wednesday evening. (PETE BANNAN/MEDIANEWS GROUP)

That didn’t alter the challenge of the technically sound and deep Jems, who were decisively the better team on the day, pressuring constantly and winning the territorial battle with 10 corners to just one for Haven. But all the possession didn’t translate into many shots, and at the break, only a Maggie Forbes own goal separated the teams, headed home by the junior midfielder with six minutes to half after a dangerous cross in by Katie Sullivan.

The game was tight until the 59th, when striker Jillian Hunter tapped home a Sullivan cross. But the Panthers had battled to keep the game so close for so long, thanks in part to the work of Kuzemka and freshman Sara Kolecki in central defense.

That duo has gotten the bulk of time in the middle, and Wednesday was no different. Kolecki is one of three freshmen that start for Gino Miraglia’s club. And Kuzemka, who missed her freshman year after tearing knee ligaments in June 2018, is a grade between freshman and sophomore in the soccer sense.

Strath Haven’s (12) Ellie Malek and Villa Joseph Marie’s (5) Emily Borell jostle for control in the first half of the District One Class 3A final at Phoenixville High School Wednesday evening. (PETE BANNAN/MEDIANEWS GROUP)

“It’s kind of weird,” said Kuzemka, whose older sister Raina was an All-Delco at Episcopal Academy last year but is out this season with a knee injury. “I think sometimes people forget and they call me a freshman and then they’re like, never mind you’re a sophomore. But I feel toward the end of the season, I’ve become more of a sophomore, but I started out definitely more like a freshman.”
“We’ve known each other forever, and we’re doing it all together, we’re learning all together,” Kolecki said. “And we trust each other. And it’s doing great on the field.”

Part of the assignment at halftime was to pick up Forbes, who was visibly upset at the own goal. Forbes’ two goals Tuesday got Haven to this round and to states, which is part of the wisdom teammates shared with her on the bench.

“It’s not her fault at all,” said Kuzemka, who assisted on both of Forbes’ set-piece goals. “It was a team effort. We could’ve stopped the cross before that. There was a lot of things that went into it.”
The center backs mainly bottled up Villa’s forward tandem of Hunter and Ciara Rago, at least until Hunter struck in the 59th. Eventually, the superior speed of Villa’s wingers, both of foot and of decision-making, opened up the game, with Sullivan on one side and Kennedy Kilchrist the other.

Sullivan got the third goal in the 75th when center back Julia Beck, who was outstanding, played a free kick quickly to the foot of the midfielder near the penalty spot. Fellow center back Shea Riley decided to pile on with goals in the 77th and 79th, shooting from distance on backup goalie Andie Galante despite Strath Haven calling off the dogs in a game that had been decided.

Wolgast, the star of Tuesday’s game with nine saves, had four Wednesday. The most difficult chance that didn’t go in came when Beck hit the crossbar early on a free kick that Wolgast might have gotten the slightest nick of.

Strath Haven had only two shots on target. The most dangerous look came on their only corner with 15 minutes to play, facing a two-goal deficit. Forbes arrived at the spot where Kuzemka delivered the in-swinger, but Villa had enough traffic on the goal line to repel it.

It was a tough result for the Panthers to stomach. But for the youth in their defense, it’s another lesson going forward, one that will carry into the state tournament.

“You just have to keep going,” Kolacki said. “The game itself doesn’t change until every single person gives up, and I don’t want to be that person. I want to keep going.”