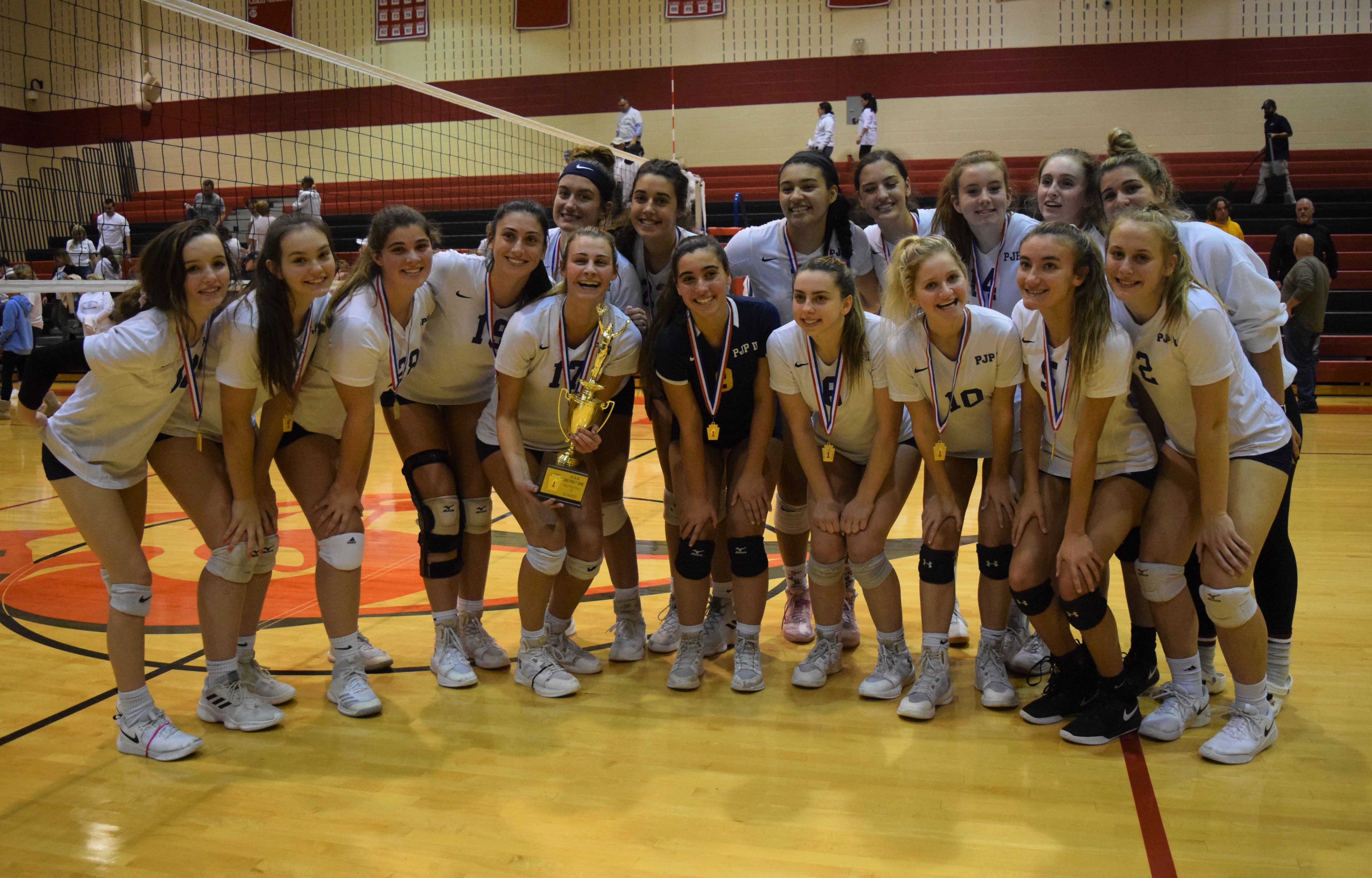 ‘Finesse’ by Bruno Mars was blaring over the speakers at Harriton High and a dance break broke out.

“It was with Heather (Lesinski), Hanna (Tulli) got in it, Julia Durand and Sarah Ward got in it, too,” the Golden Panthers’ junior setter said. “We do it to get us fired up. Every time we’ve had a dance before the game, we’ve done really well.”

This one came mid-match, but they had every reason to be dancing.

Pope John Paul II against Villa Maria is the defining rivalry in Class 3A of District 1: the two teams have met for district gold in four of the past six seasons.

“Ryan (Sell) has a great program there at PJP and a lot of the girls know one another from playing club. No matter what’s going on we always just rise to the occasion, both them and us,” said Villa Maria coach Peggy Evans.

The PJP team has leaned into the positivity this season and it appears poised for a deeper run than last year’s to the PIAA quarterfinals.

“Our team does a really good job in staying up, staying positive and pushing to the end,” said Ward, the team’s leading outside hitter.

Ward has taken a step forward, much like the rest of the Golden Panthers, as a high-volume hitter.

“My freshman and sophomore year, I was always afraid going on the court,” she said. “But the last two years I’ve gone all out, not holding anything back.”

PJP, which had a considerable size advantage on the front line, won Game 1 comfortably, 25-18, but got a better test from the Hurricanes in Game 2, led by the setting and serving of senior Alivia Orvieto. The set was tied throughout, 8-8, 17-17, 21-21 before the Hurricanes built a 24-21 lead. But PJP turned it on – a reversal of last year’s final when it crucially capitulated in the pivotal second set – a Tulli block tying it at 24-24. PJP won the set on a scrambling point thanks to its defense, a great dig by Donovan saving the point and making way for a block by Ward to end it.

“We were really excited,” Harvey said. “We knew they were going to come back harder, so we tried our best to keep the energy high, keep the intensity. We’re really good at having each other’s back and lifting each other up if something doesn’t go our way.”

Big time close in game 2 for @PJP2volleyball as they rally from 21-24 down to win set 26-24 on block and take 2-0 lead on Villa Maria, District 1 3A girls volleyball final pic.twitter.com/DOsKougdI1

The third set was all PJP, building as large as a 20-6 lead before clinching the match on a kill from senior Julia Durand, her fifth kill of the match.

According to PJP head coach Ryan Sell, cohesiveness has carried the squad this fall.

“I think our team is a lot closer this year. Our seniors have done a really, really good job of saying from Day 1 that it’s about having fun, competing at a high level, and they just want to have everybody involved,” Sell said.

Evans was equally full of praise for her seniors, Orvieto, who moved from libero to setter this season, Katie Scaggs, Olivia Bertoline, Amelia Collins and Olivia Karkenny.

“The seniors are special,” she said, “it’s a really good group of young women who have made the culture of the team one that the girls aren’t afraid to make mistakes. They’re encouraged to grow and get better.

“(PJP) had a great match. We would have had to play our A1 game to even come close. I’m just really proud of these girls.”

PJP, as District 1’s top seed, will face the runner-up in District 12 in the first round of the PIAA 3A Championships; Villa Maria will meet the District 12 champion. The state tournament begins Tuesday, Nov. 5.