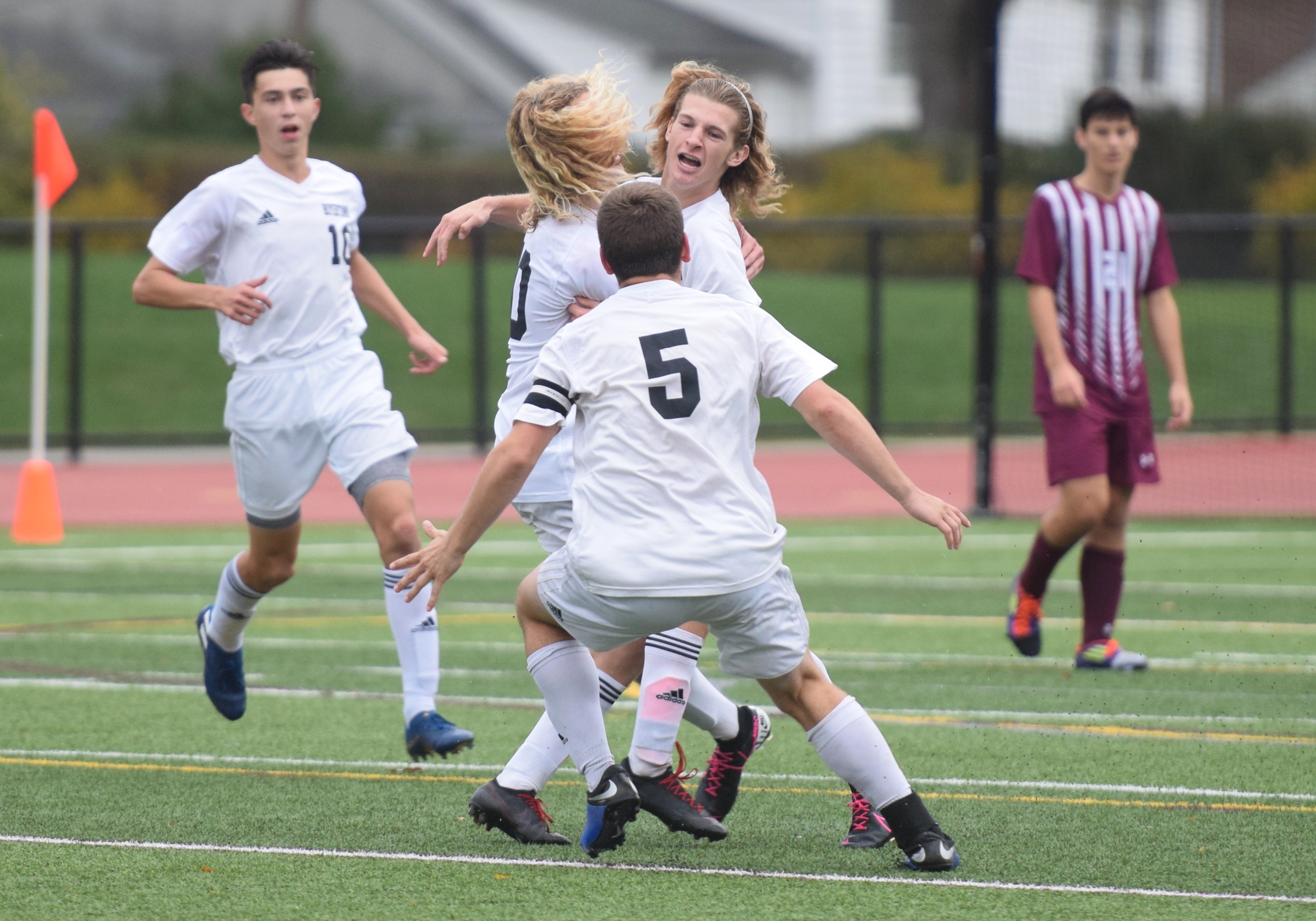 LOWER MERION >> Landon Wenger found himself on the left wing for much of the season out of necessity.

Tuesday, when the Boyertown senior popped up there six minutes into the first overtime, it was a luxury.

Wenger picked up a pass from sophomore brother Beckett Wenger, took two touches to his right and nailed a shot low to the far post to lift No. 3 seed Boyertown to a 1-0 overtime victory over No. 2 Lower Merion in a District 1 Class 4A semifinal Tuesday at Lower Merion.

“I’m feeling amazing right now,” Landon Wenger said. “I just watched by brother pass me the ball, I cut in and every defender seemed to shift to my left, so I took another touch to my right and saw the far post.

“It was a really good finish.”

Every Bear and their supporters would agree, on all levels.

Pioneer Athletic Conference champion Boyertown (20-1-2) advanced to the District 1 championship where it will face the winner of Tuesday’s other semifinal, North Penn and Conestoga. The Bears became the first PAC boys team to ever reach the District 1 final in the large-school classification.

“It’s really awesome,” Landon Wenger said. “All of us, we’ve been looking forward to this all season. This was one of our main goals: to get to the district final and win it. To get there now, it’s just amazing.”

Lower Merion took its first loss of the season (19-1-1) but will get a chance to bounce back in a third-place game for state seeding. Both Boyertown and Lower Merion already clinched spots in the PIAA tournament by reaching the semifinals.

Aces head coach Nico Severini was pleased with his squad’s performance despite its first setback of the year.

“We played a good game against a very good team. Unfortunately the bounces and the chances didn’t go our way,” Severini said. “The one opportunity that they had they were able to put in the back of the net.

“I think it was a strong performance from our group. There’s always things you can clean up, and it would have been nice to capitalize on the chances that we created but sometimes that’s the way soccer is.”

It made for a game with few great chances for both teams. Boyertown was the cleaner team in the first half and had a bit better of the possession. The Bears’ best chance in regulation came from a Drew Benning shot from 16 yards on the left side, but LM goalkeeper Michael O’Gara (6 saves) saved cleanly.

Lower Merion’s big push, with Philip Monos, Josh Axelrod providing a spark, came in the final 20 minutes of regulation when they hit the frame twice, the second on a William Pitonyak header from a short corner with 13 to play.

Boyertown goalkeeper Mason Kurtz needed only three saves for the shutout, but commanded his area expertly and got quality front-foot defending from back four Ryan Foskey, Kolby Houck, Matt Selders and Justin Patten, and midfielders Jake Groff and Landon Wenger.

Even with a shutout performance, Houck demanded better of himself and the unit postgame.

“I personally don’t think I did as much as I could have so I’m just ready to get going to the next game,” the senior center back said. “They got too many opportunities in my opinion and we let that happen. We’ve just got to shut it down. There shouldn’t get any opportunities. The next one needs to be better every single time.”

It’s hard to find a more communicative defense than Boyertown’s, a major reason why it’s in the district championship.

“We’re really connected,” Houck said. “We always have each other’s back every single time and we let each other know that. Knowing we have support, we’re able to step (forward) and do what we have to do.”

The game was increasingly open after halftime and into overtime. The Bears were improved in overtime after taking on pressure over the final 20 of regulation and Wenger seized the big moment with 9:09 on the clock.

Boyertown’s Landon Wenger pulls back to kick the game-winning goal of a 1-0 overtime win over Lower Merion in a District 1 4A semifinal Tuesday at Lower Merion. (Austin Hertzog – MediaNews Group)

Landon Wenger returned to the center of midfield since sophomore Beckett got back into the lineup a round earlier in a win over Neshaminy. Having played on the left wing during his brother’s absence, it was a familiar position to provide the game-winner.

“It just kind of happened the way the player developed. I just kind of found myself out there,” Landon Wenger said. “I’m actually more used to playing in the middle, but playing left wing this year definitely helped for that situation.”

NOTES >> Boyertown senior Matt Kerr took a tackle to the ankle in the first half and did not finish the game due to the injury. … Beyond soccer skill, the Wenger brothers are fairly unmistakable with their long, blond hair. “My brother started growing it out in 3rd grade. I started growing it out 2-3 years ago. It’s a style we can both rock. There’s no real back story, we just like it.”
There’s still a lot to play for.