With a ‘laser’ arm, Jack Ryder ready to put Strath Haven over the top 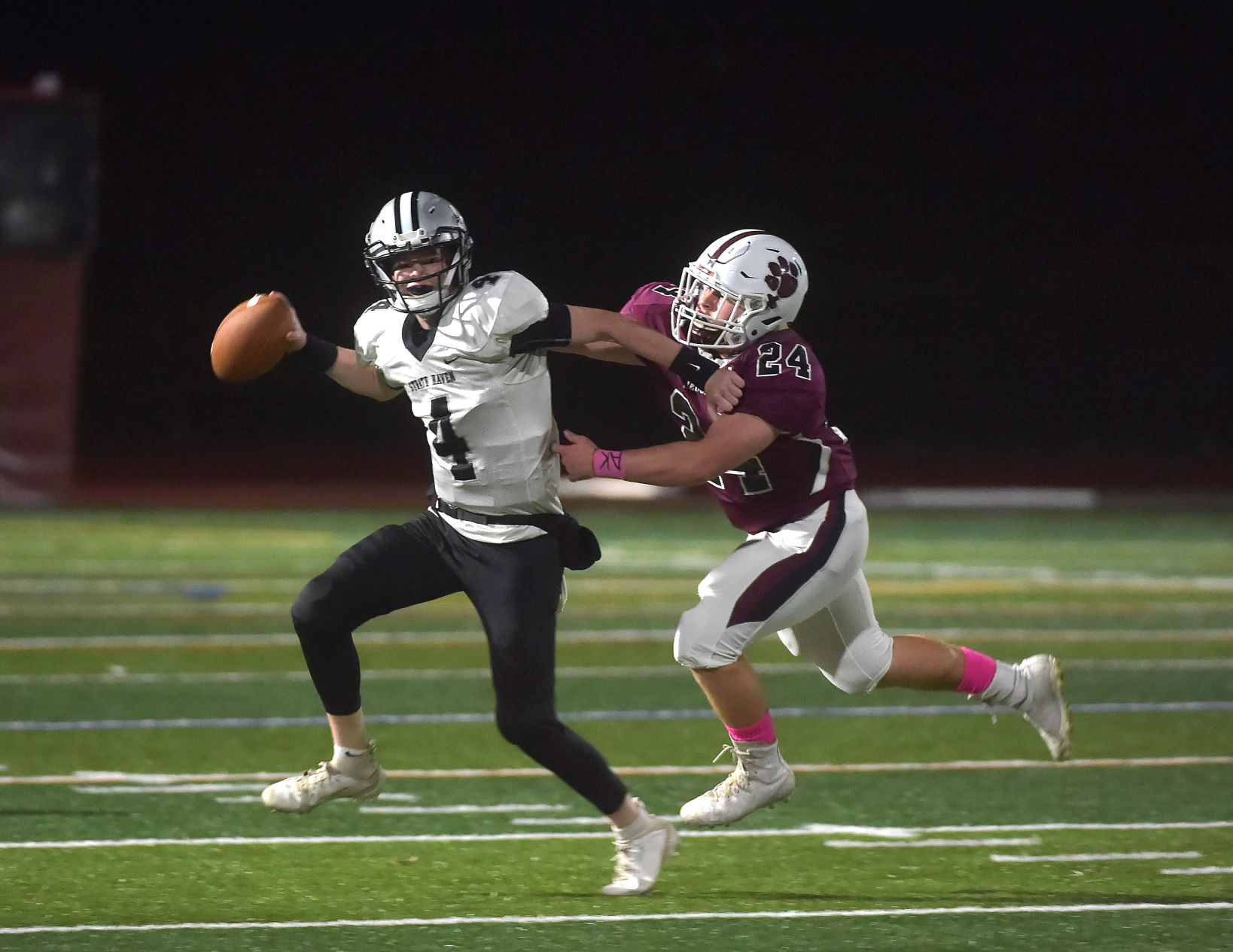 LOWER MERION — Through summer workouts and training-camp tests and every practice of a long and successful season, John Prochniak would grow well aware of a deep Strath Haven football secret.

“When he’s throwing against us, he is throwing lasers,” said Prochniak, a linebacker and running back. “He is a great quarterback.”

In a season where the 8-2 Panthers methodically succeeded with Kevin Clancy’s long-established running game, Ryder’s big arm was often hidden. But in a 56-0 victory Friday over Lower Merion at Harriton High, Ryder gave a hint at what his teammates already understood.

He threw just two passes but made both sting, finding Jaris Adams for a 44-yard touchdown and connecting with Koll Peichel for 31 yards and another.

With the Panthers ready to roam from the Central League, where they’d gone 7-2, and into the playoffs, Ryder’s efficiency would serve to prevent opposing coaches from identifying their offense as one-dimensional.

“He’s good,” Clancy said. “He’s been in for over 500 snaps this year. He has zero fumbles and one interception. He is secure with the ball. We have all the faith in the world in him. He is tremendous. He could throw if we wanted to. It’s just not what we’re doing right now. But we are going to have to throw somewhere down the line, and he has the ability to do it.”

The Panthers threw just 42 passes during the regular season, and would have no reason to run up Ryder’s pitch count Friday as they dropped the Aces to 0-10, 0-9 in the Central. That was clear early when Matt Shuler returned the opening kickoff 40 yards to the Lower Merion 45, setting up a three-play touchdown drive ending with Evan Blake’s 23-yard burst. Just 2:21 later, Ryder found Adams for a score. And before the first quarter was over, Peichel would cap a four-play drive with his TD reception.

“I think it’s really important that we throw the ball just a little bit because it opens up the offense and it opens up the run game,” Ryder said. “Altogether, it makes our team better.”

Strath Haven enjoyed its usual ground success, rushing for 250 yards and five touchdowns. While not thriving on defense, Prochniak sandwiched TD runs of one and 10 yards around Shuler’s 18-yard interception return for a score.

“My linemen always give me great holes,” Prochniak said. “And I just do the rest.”

Strath Haven enjoyed a two-yard scoring keeper from backup quarterback Isaiah Freeman and a 16-yard, fourth-quarter scoring burst from Alex Hemingway during a running clock half after intermission.

Lower Merion found success in back Jay Zheng, who battled for 65 rushing yards and showed grit on special teams, returning a third-quarter kickoff 26 yards to the 36 to provide some reasonable field position.

“We played hard all year,” Aces coach Evan Breisblatt said. “We have 40 returners back for next year’s team. You saw 11 sophomores out there tonight. Take nothing away from Strath Haven. They are a well-coached, oiled machine. They are very physical and what they do they do very well. And they are going to be a tough out in the playoffs.”

Prochniak led a parade of eight Strath Haven ball-carriers with 69 yards. Peichel had 77 total yards, including 46 on the ground to help provide momentum as the Class 5A postseason looms.

“We have to have a good week of practice,” Ryder said. “We have to get everybody healthy. And we have to keep it rolling.”

That will require that commitment to the running game that has made Clancy’s program so dominant for decades. But a lengthy postseason run will need a passing threat too.

“You don’t want guys just stacking the box,” Ryder said. “You have to spread the defense out. And maybe we can get one or two over the top and score some points.”