Stevenson, Chester go out on highest of notes 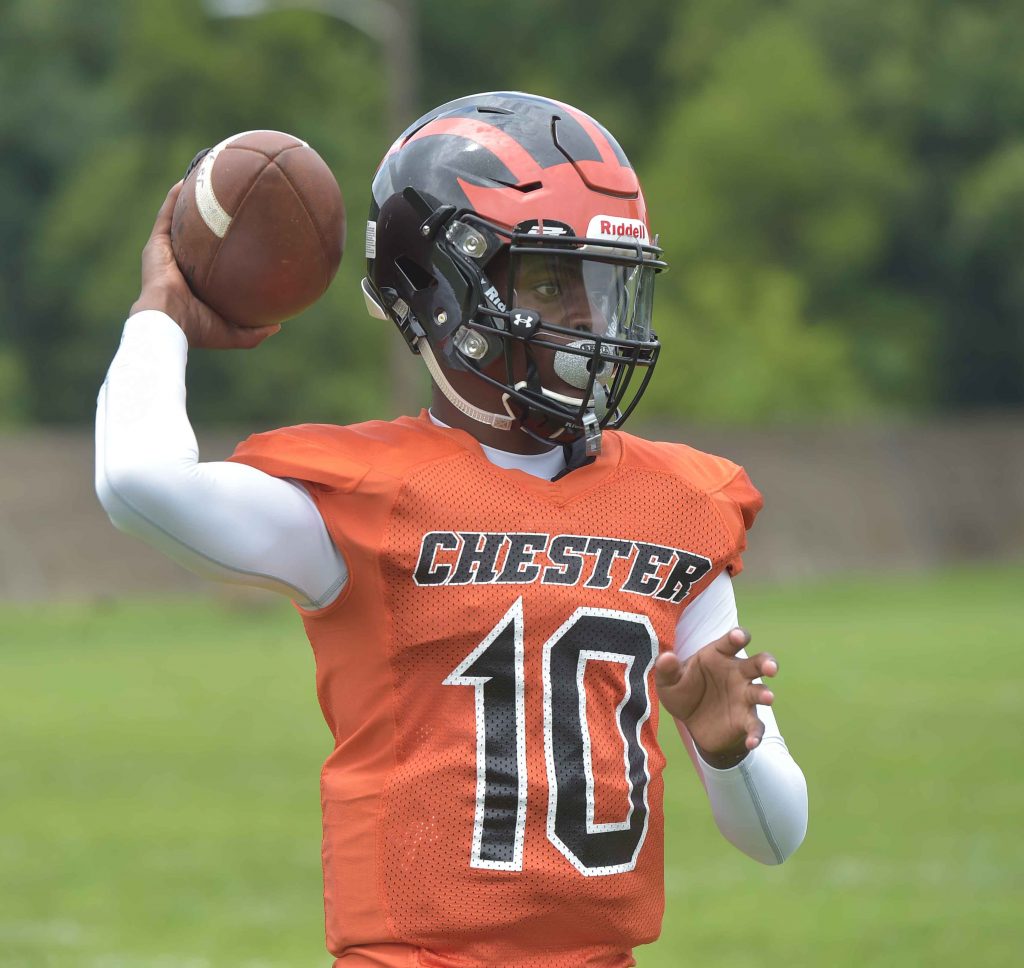 CHESTER — After the game, Dymiere Stevenson was greeted on the field by his mother, stepfather and grandmother. There were many pictures, hugs and kisses to go around.

Stevenson was emotional. He strapped on a custom-made championship belt and big, gaudy gold chain, which is awarded to Chester High’s MVP of the game.

The junior quarterback made history in the Clippers’ season finale. Stevenson completed 14 of 24 passes for a school record 370 yards with six touchdowns in Chester’s 60-13 trouncing of Interboro. The Clippers (7-3, 2-2 Del Val) ended the year with a winning record for the first time in 11 years. While they are deserving of a spot in next week’s district playoffs, they fell short of qualifying in a stacked Class 6A tournament. Meanwhile, in Class 5A, there will be a handful of teams sporting losing records, who are less deserving than Chester of participating in the playoffs.

Stevenson was thrilled to put his name in the Chester record books. He also eclipsed the 1,000-yard plateau for the season and completed his junior campaign with 18 touchdown passes.

“When I first threw the touchdown pass to break the record, wow, it was a great feeling,” Stevenson said. “I couldn’t believe that I broke it. It’s really only up from here.”

The main targets for Stevenson in the Clippers’ passing game all season were senior twins Malik and Malachi Langley, each of whom put on a show in their swan song wearing the orange and blank. The multi-sport athletes, who will run track, play football or perhaps do both in college next year, one-upped each other all season long. Malik surpassed his brother in TDs, finishing with 12 to Malachi’s 11.

“I got him,” Malik said, laughing. “I told him before the game, let’s see who gets the most. It was a battle the whole game. Every time he scored, I was like, ‘Dang, I gotta get one now.’ I won the battle.”

Malik Langley made six catches for 138 yards and two touchdowns, while also running in a score. Malachi Langley had four receptions for 108 yards and a pair of TDs, and returned an interception 24 yards to the house.

“We’ve had our ups and downs,” Bacon said, “but we learned to stay together all year.”

Anton Sterling ran for 144 yards and a touchdown. He ended his junior year with 753 yards and 10 TDs. Senior linebacker and co-captain Aasim Muhammad reached a lofty personal milestone, racking up his 300th career tackle.

“It feels amazing to have my name on that list with a lot of Chester greats who had 300 tackles,” Muhammad said. “Most all, though, I wanted to win and have fun and cherish my last high school football game. I’m just happy to put myself in the 300-plus club and finished strong with a win.”

On a day where the quarterback set the single-game school record, it’s worth noting that Chester went 7-3 on the strength of a tremendous defense led by seniors Rafiqe Hilliard, Muhammad, Darnell “Nelly” Jones and many more. Entering the final weekend of the regular season, the Clippers were the third-best defense in Delco in terms of yardage (149.7 per game) and second in points-allowed (9.0).

Chester ranked first in the county in takeaways with 34, including five against Interboro. Reaves, Malachi Langley and Tahmir Reese each had an interception.

“Our whole mindset all season was to come out and dominate every game,” Jones said.

Chester coach Ladontay Bell, a beacon of light for Chester High athletes since he moved up from middle school coach, oversaw the current graduating seniors since they were freshmen. In the post-game huddle, Bell told his guys, “in my heart, we are champions.”

“To my seniors, these were my kids who I raised through the program and I was able to see the fruit of their labor, where we were able to finish a strong 7-3,” Bell said. “When I first took over we had kids who were under other coaches, coming from losing teams. I’ve seen before my eyes the tide turn here. We talk about cultural shock and, truthfully, it shocked a lot of people to the point where teams were surprised that Chester was 7-3. We had to take the anchor out of the water and let the currents move us, and the ship is moving this year.”

Bell forsees the Clippers improving in 2020 and believes the 13 seniors leave behind a positive legacy.

“We’re looking to build on this. When you think about a ship, when it gains momentum it’s hard to stop,” he said. “To have 13 seniors leave us, we believe we’ve groomed the young men behind them to