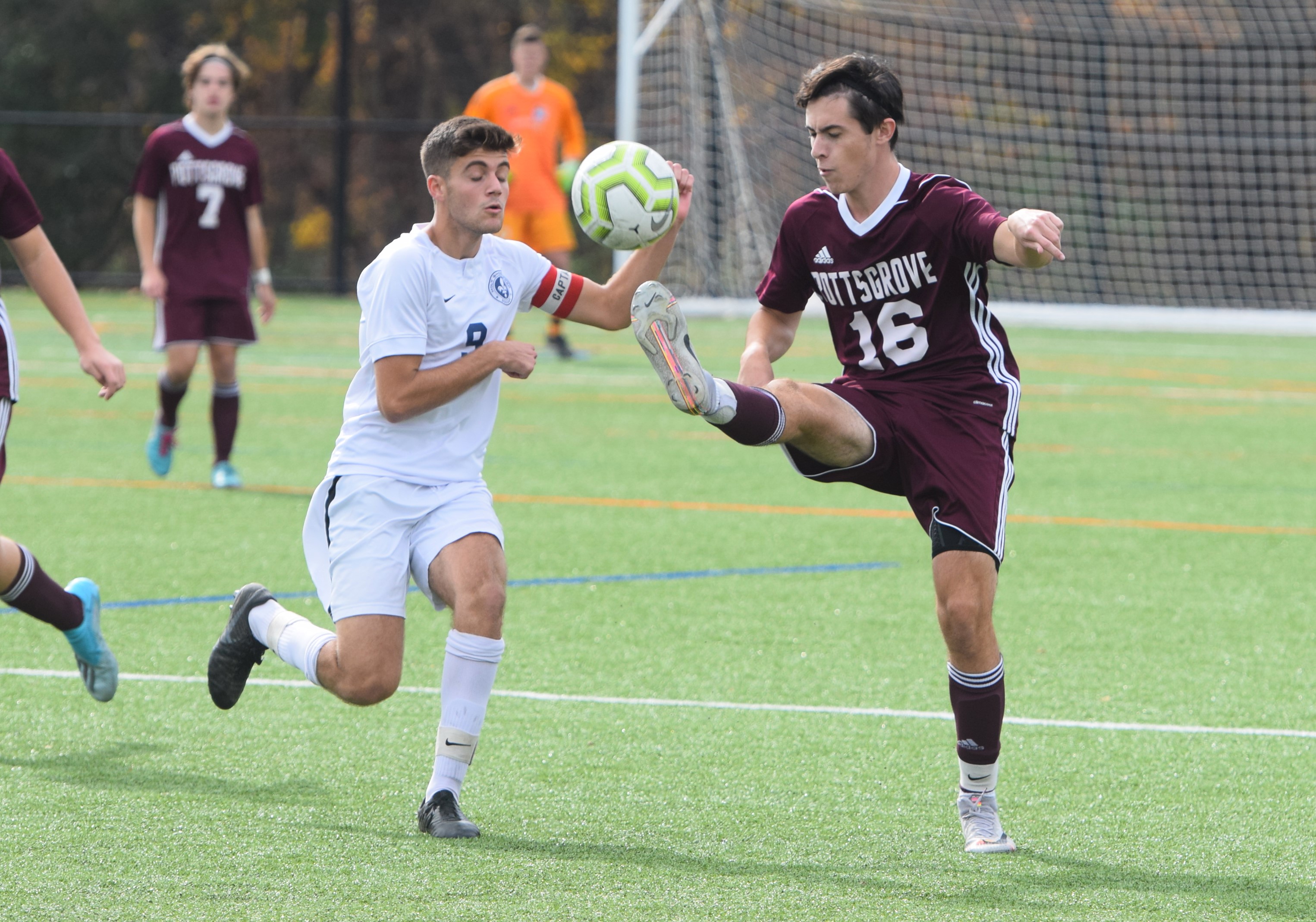 LOWER POTTSGROVE >> It left everything on the field Saturday.

Sadly for Pottsgrove, it got nothing tangible from its District 1 Class 3A playoff semifinal with Holy Ghost Prep. The Falcons dueled with the Firebirds in a game that went to double overtime, but in the end they saw their guests come away with a 1-0 victory.

Nothing tangible, like a berth in next week’s championship game and the PIAA playoffs … but plenty of intangibles. Stalwart play for more than 100 minutes, positive response to a very physical level of action and the satisfaction of compiling a solid season both in the Pioneer Athletic Conference and district.

“I’m proud of the kids,” head coach Jay Witkowski said after huddling with his players one last time. “They kept their composure and stayed together.”

After 80 minutes of regulation play, and 23 of overtime, Ghost ended the marathon affair with a “golden goal.” Stefan Melokos got the setup from Max Giuliana and nailed a shot into the far left corner.

It capped a concerted effort by the visitors to weather a man-down situation going back to the 9:41 mark in the second half, when a Firebird player drew a yellow/red card.

“We fought hard to the end,” Melokos said. “After the red card, everyone put out the effort to play the card out.”

For players like Pottsgrove senior Colin Deckert, the abrupt end to the season didn’t overshadow the team’s accomplishments … among them placing first in the PAC’s Frontier Division and qualifying for its Final Four playoffs.

“Everybody worked great,” the Misercordia University-bound Deckert said. “The team got close this year.” With the man advantage, Pottsgrove still found its drives to the Ghost goal stymied by the Firebirds’ concerted play. A Falcon corner play with 1:45 left in regulation was covered by the visitors, as was a push 8:02 into the second overtime.

“A man up, we could push more and get Deckert on top,” Witkowski said. “We wanted to get Colin out from the back and play on top.”

“With the extra man, we thought we could get it done,” Deckert added.

To its credit, Pottsgrove countered HGP’s numerous pushes — a function of its ball control and possession grabs from the Falcons — up to the end. A result was the Birds lofting shots over the crossbar at 8:12 in the second half and 38 seconds remaining in the first OT, as well as covering a push at 8:58 in overtime.

“The playoffs are different,” Deckert noted. “The teams are better, and the play is chippier and tighter.”

Melokos recalled how HGP was in a similar situation in a 2018 playoff game with Strath Haven, ultimately losing in overtime.

“It was a great defensive effort. A great team effort,” he said of Saturday’s performance.

Ghost finished with a 15-10 edge in shots on goal. Pottsgrove keeper Luke Kaiser had 12 saves to seven by the Firebirds’ T.J. Butler.

“The game is about inches,” Deckert noted. “It can make or break a season. My freshman year we lost a game in overtime, and it was the same script: 1-1, the ball fell in the top of the box and was put in.”

The third-seeded Firebirds will face the winner of Saturday’s other semifinal between top seed Bishop Shanahan and fourth seed Strath Haven 7 p.m. Wednesday at Phoenixville. The title finalists have already qualified for the state playoffs.

“They (Falcons) wanted it, but we wanted it more,” Melokos said. “It was a very intense game.”

NOTES >> Ghost was whistled for two red cards, one of which caused head coach Ken Lawson to be ejected after drawing his second yellow. … The Firebirds had two players sustain game-ending injuries: Anthony Colon (shoulder) at 4:58 in the first half, Tyler Welmert (left ankle) at 34:20 in the second. … The teams split their last six matchups, 3-3. … It was noted Witkowski is a graduate of Holy Ghost Prep.