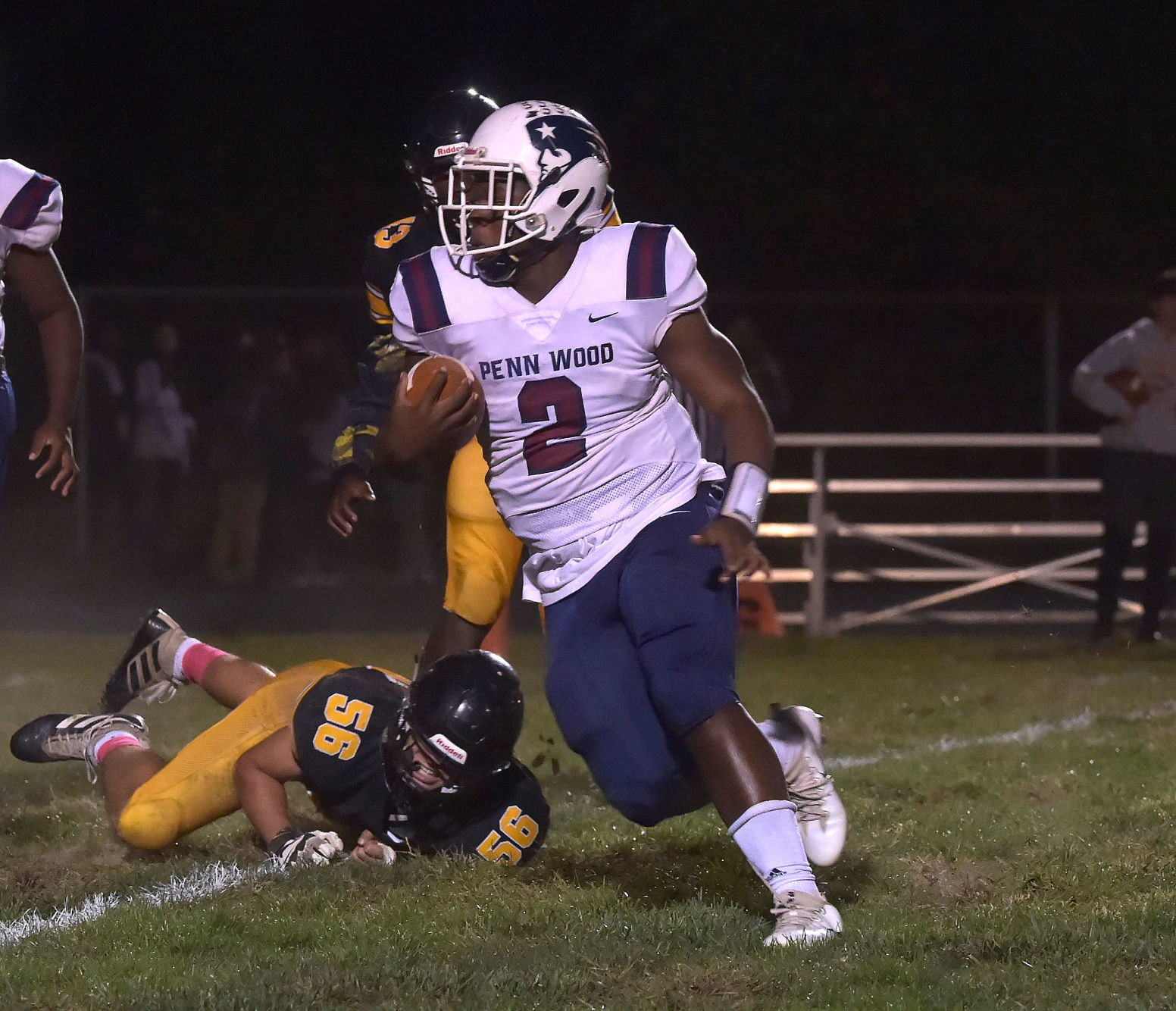 YEADON >> It was the middle of the second quarter Friday, Penn Wood had a two-score lead, but Desman Johnson Jr. was angry.

The Patriots’ record-setting senior quarterback snapped on the sidelines. He yelled to no one in particular. Eventually halftime came and eventually Penn Wood put away a 40-19 victory over Chichester.

The win sent the Patriots to 6-3 overall, 3-1 in the Del Val League and gave the program at least a piece of its third straight league title. Penn Wood, currently ranked sixth, will host a first-round game next week in the District 1 Class 5A tournament.

“Obviously we won by a large amount of points, but the game should’ve been over,” Johnson said. “We should’ve done better. At points, we made mistakes we shouldn’t make because when we play better teams, the mistakes are going to (make us) lose that game. So, I was getting frustrated because even though we’re in the lead, we still need to make those plays.”

Johnson is well aware of the high expectations his team has. He wants to exceed them. On this night, he did his part, passing for 230 yards and three touchdowns (that’s 7,243 yards for his career). He also did it with his legs, rushing for 80 yards and another score.

Everyone knows Johnson has a cannon attached to his right shoulder. Chichester quickly discovered he’s also rather difficult to tackle.

“Their safeties, they were expecting the deep passes,” Johnson explained. “So there were times I had to run or throw a short pass, change the game up a little bit.”

Johnson’s three-yard scoring run gave Penn Wood’s offense its first points – the game opened on Mailk Brooks’ 95-yard kick return. He added touchdown bombs of 69 yards (to Ameen Stevens) and 46 yards (to Jordin Jones) during the first half, and a 24-yard lob (to Elijah Gleplay) during the second half.

Penn Wood was up 18-0 before Chichester (3-6, 1-2 Del Val) fought back. The Eagles took advantage of penalties and miscues, but earned a lot on their own. Bryen Hamm had a one-yard touchdown run and Marquise Fields added a 60-yard jet sweep during a funky second quarter. They also blocked a punt for a safety.

This is the kind of stuff that set Johnson off. Penn Wood coach Ato Troop has seen it all season, and all game, long. Eight fumbles, 14 penalties. And four interceptions of Chichester.

“We’ve got to be consistent,” he explained. “Now we’re up, we’ll stop, we’ll go back. We’re flashy.”
Penn Wood had 437 yards of total offense. It only yielded a 42-yard Zach Taylor field goal during the second half. Gleplay’s touchdown catch and his fourth quarter 50-yard run put the game away. He had 107 yards rushing on the night.

There was no massive celebration when the game ended. Penn Wood claimed outright Del Val League titles the last two years. A shared crown with Academy Park (both 3-1 league) felt, well, not as good.

“Of course, we’d rather have it to ourselves,” Johnson said.

“It’s not the way we wanted to win it,” Troop added.

Regardless, Penn Wood is in the playoffs for the fourth straight year. Last season, the Patriots went three-deep. Their first-round game next week will be at The Graveyard. Which version of this team will show up?

Chichester, set for the its second-ever playoff game after a one-year absence, will be on the road. The Eagles came into this week seeded 11th. They were in this game despite a bevy of first-half drops and an early three-score hole.

As a team, the Eagles rushed for 145 yards. Their defense kept them in the game until Penn Wood became simply too much to handle.

“Our team got down pretty early,” Chichester coach Bob Brice said. “Our kids answered back. … I was proud of them.”