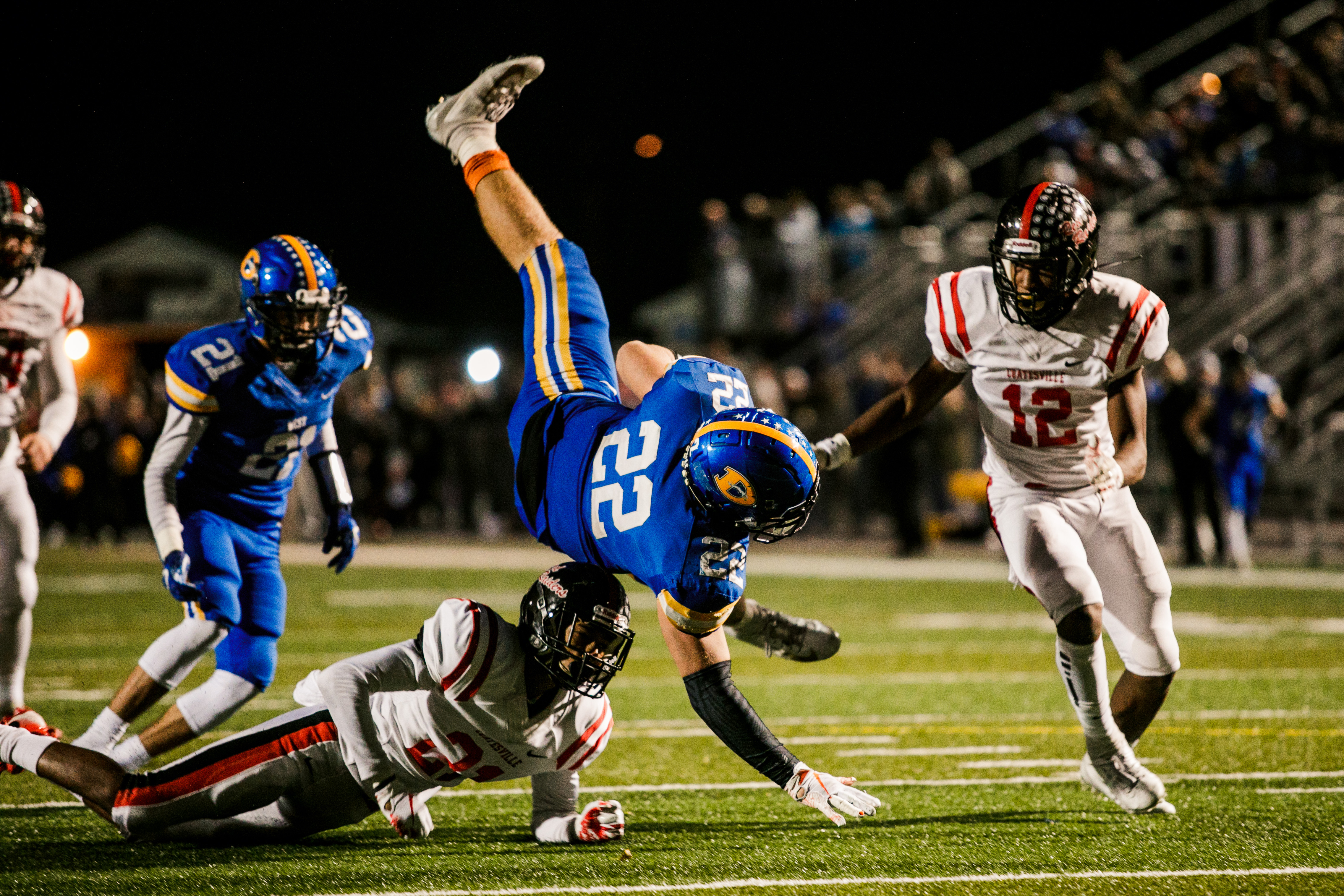 LONDON GROVE – It was every bit of a test as the showdown a week earlier, even though nobody would mistake a struggling Avon Grove squad from powerful Coatesville.

How would the Downingtown West football program respond after dropping its first outing of the season while playing in the regular season finale in preparation for next week’s District 1 6A Playoffs opener? Would the Whippets feel sorry for themselves, or use it as motivation?

The answer came very early Friday, as West rolled up four first quarter touchdowns, did not play any starters in the second half, and cruised past the host Red Devils 41-7 on Senior Night. And the Whippets unwittingly earned themselves a share of the Ches-Mont National crown in the process.

“We are a better football team than Avon Grove, but the fear was that after an emotional loss last week that we wouldn’t come out focused. And to their credit, they did.”

During his postgame comments – while the Downingtown East-Coatesville clash had yet to be decided – Milano made a big assumption that the Raiders had won and clinched the outright title.

“We went 9-1, and one of the goals is to be the best West team ever,” Milano said. “That’s going to require a few more wins, so we’ll see. We are disappointed we didn’t win a Ches-Mont championship, but we have other goals on our plate that we are after now.”

But the Cougars came from behind to win it 28-24, which gave the Whippets a share of the title along with East and Coatesville.

“(West is) so efficient,” said Avon Grove head coach Harry O’Neill, who’s faced all three. “You watch them on film and you know they are good, then you get out here and the speed that they execute is just phenomenal.

At 9-1 overall, the Whippets are expecting to be the top-seed in the upcoming district playoffs. The matchups have yet to be determined.

“We wanted to make sure if we see Coatesville again, it’s at home,” said star tight end/defensive end Sean Pelkisson.

“We will be (the No. 1 seed) now,” Milano added. “We are talking about the second season, without a doubt. And we will get to play on our field all the way through.

It was the final game of the 2019 season for the Red Devils (1-3, 1-9 overall), who dropped their final six. But the schedule was brutal and Avon Grove suffered more than its fair share of injuries, particularly up front.

“All 10 teams we played are going to make the playoffs,” O’Neill pointed out. “Heading into (Friday), the combined record of our opponents is 76-24. I thought we played a tough schedule last year but this is even worse.

“But we never quit. It’s amazing. We are 1-8 and they are playing like it’s the Super Bowl. It’s a great group of kids. Our culture has changed. I don’t have to worry about them playing hard. That’s the expectation now where it wasn’t my first few years here.”

Downingtown West found the end zone on five of seven first half possessions, and the two that didn’t ended with Avon Grove’s Sean Glatts picking off quarterback Will Howard. Glatts leads the league with seven interceptions.

But other than the turnovers, West was extremely efficient, rolling up 35 points on drives covering just 18 total plays. Runner Tariq Lewis delivered the first two TDs on runs of 26- and 4-yards, Howard had scoring strikes of 29- and 27-yards to Jack Garrity and Pelkisson, respectively, and Max Hale added a short touchdown run after teammate Ryan Waters recovered a fumble deep in Avon Grove territory.

“We just wanted to win and get out,” Milano said. “I preached all week that Avon Grove is the best one-win team around. Harry does a great job but they’ve been limited with injuries.”

“I don’t think we dwelled on (the 29-21 loss to Coatesville) too much,” Lewis said. “After we watched film on Saturday morning it was out of our system.

“But we wanted to take the anger that we had from the loss and put it on Avon Grove. It’s nothing personal, just what we needed to do.”

Defensively, Pelkisson had a sack and another tackle for loss to force a turnover on downs. And remember, all of the starters did it all in the first half.

“Pelkisson is a very good player. If you can’t get him blocked, you have to figure out a way to run the other way,” O’Neill said.

“Everybody was worried we’d come out flat because of the record of (Avon Grove) and because it was a devastating loss,” Pelkisson added. “We came out ready to avenge that loss.”

West used four quarterbacks on the day, and despite a running clock in the second half still rolled up 314 yards.

“We were able to get into a rhythm tonight,” Milano said.

“I appreciate (Mike) Milano,” O’Neill chimed in. “He took it easy on us by stretching out the clock.”

Now, the second season is up next, starting with the district opener next Friday.

“Our whole season has shown that we are ready to play playoff football,” Lewis said.

“We’ve played seven of the teams that are in the top eight,” Pelkisson agreed. “We just need to keep playing big-boy football like we have been.”