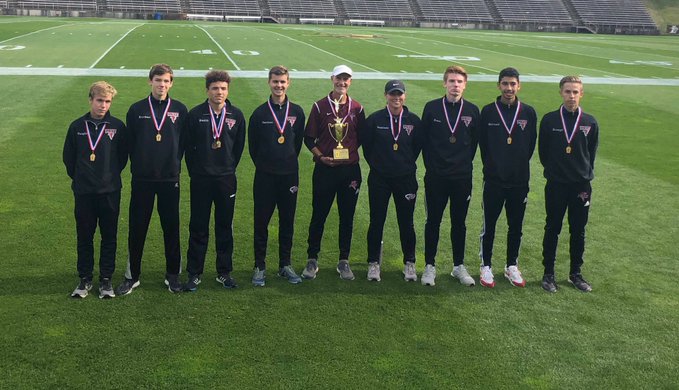 The Pottsgrove boys and Pope John Paul II girls captured the Class 2A team titles to lead the local contingent at the District 1 Cross Country Championships Friday at Lehigh University.

In Class 3A, freshman Claire Zubey placed third in the girls’ race to help Owen J. Roberts qualify as a team for next week’s PIAA Championships in Hershey. The Owen J. Roberts boys also qualified for states while Perkiomen Valley’s Tyler Clifford was the top local placer in fifth.

The Panthers crushed their goal, winning the AA championship by a 60-point margin en route to claiming state meet qualifications.

Sophomore Gianna Cagliola led the way, placing 3rd in 19:29. Isabella Greco and Kathryn Todd followed suit, finishing in 5th and 6th with times of 19:49 and 20:05, respectively.

The Panthers have finished in the top five of the last four District 1 and three PAC championships.

“(The PAC) was always run by the Spring-Ford and the PVs, but it’s like the attack of the Frontier Division and it’s really exciting,” Cagliola said. “Coming from such a young school it’s nice to see the young teams start to do well. Since we won last year, we wanted to do it again. For our seniors too. Our team is really close.”

Pack running has helped PJP earn a spot in the PIAA Championships in Hershey next weekend where they look to continue the program’s success.

“We have such a tight-knit community I think it really helps. We have a really good family aspect to our team and I think it helps encourage all the other small schools and shows them that they can do it if we can do it … Last year we were just out there for fun but this year we really want to make a splash and show the PIAA what we can do,” said Isabella Greco.

“I just wanted to stay really relaxed and go for it,” said Zubey. “I wanted to focus on staying smooth and not going too crazy. At two miles when we were coming up the hill I was feeling really strong so I wanted to go for it. I was able to start to pick it up.”

Pottstown’s Darius Smallwood races to second place in boys’ 2A at the District 1 Cross Country Championships, (Bennett Booth-Genthe – For MNG)

Boys 2A >> It had been five years since Pottsgrove hoisted the District 1 AA cross-country trophy. That streak was broken on Friday as the Falcons out-raced Lower Moreland and Pope John Paul to claim the championship with a score of 45.

Senior Brandon Henriksen claimed the top spot over Pottstown’s Darius Smallwood in a time of 17:01. Henriksen made a bold move at the two-mile mark to begin to separate from front pack.

“When we got to the second mile there was only like three or so left in the pack. Then it was just me and someone else behind. They were breathing heavily so that’s when I took my chance and went. It was even before the fourth K (kilometer), which is where my coach told me to go, I went a lot earlier and it paid off,” he explained.

Falcons runners Jaden Smith and Simon Keen both finished in 17:36 to earn the 6th and 7th spots, respectively, securing crucial spots in the Falcons 15-point team-victory.

“My team is here, hoping to win AA districts.” Henriksen added. “That’s why I ran today. I did not run for myself; I ran for my team. The scores are not official yet, but if we came away with the win I would probably cry happy tears and wear the district jacket for the rest of the year.”

Boys 3A >> The boys’ AAA race saw PAC champion Owen J. Roberts claim fifth place and qualify for states as a team behind the efforts of Thomas Damiani (16:04 for 18th), Andrew Mcgonigle (16:14, 30th), Vincent Fennell (16:32), and Matt Muthler (16:45 for 53rd). The Wildcats improved upon their sixth-place finish from last year and look to carry the momentum into the state meet next week.

“Honestly, at the mile mark I was feeling pretty good and was in a good spot. Generally, I pick it up throughout the race,” said Clifford. “I lost it a little in the third mile but got my way through … I was looking for top five. That is what I was aiming for. Wish I could have gotten a little bit higher, but it’s not a big deal, still super happy.”