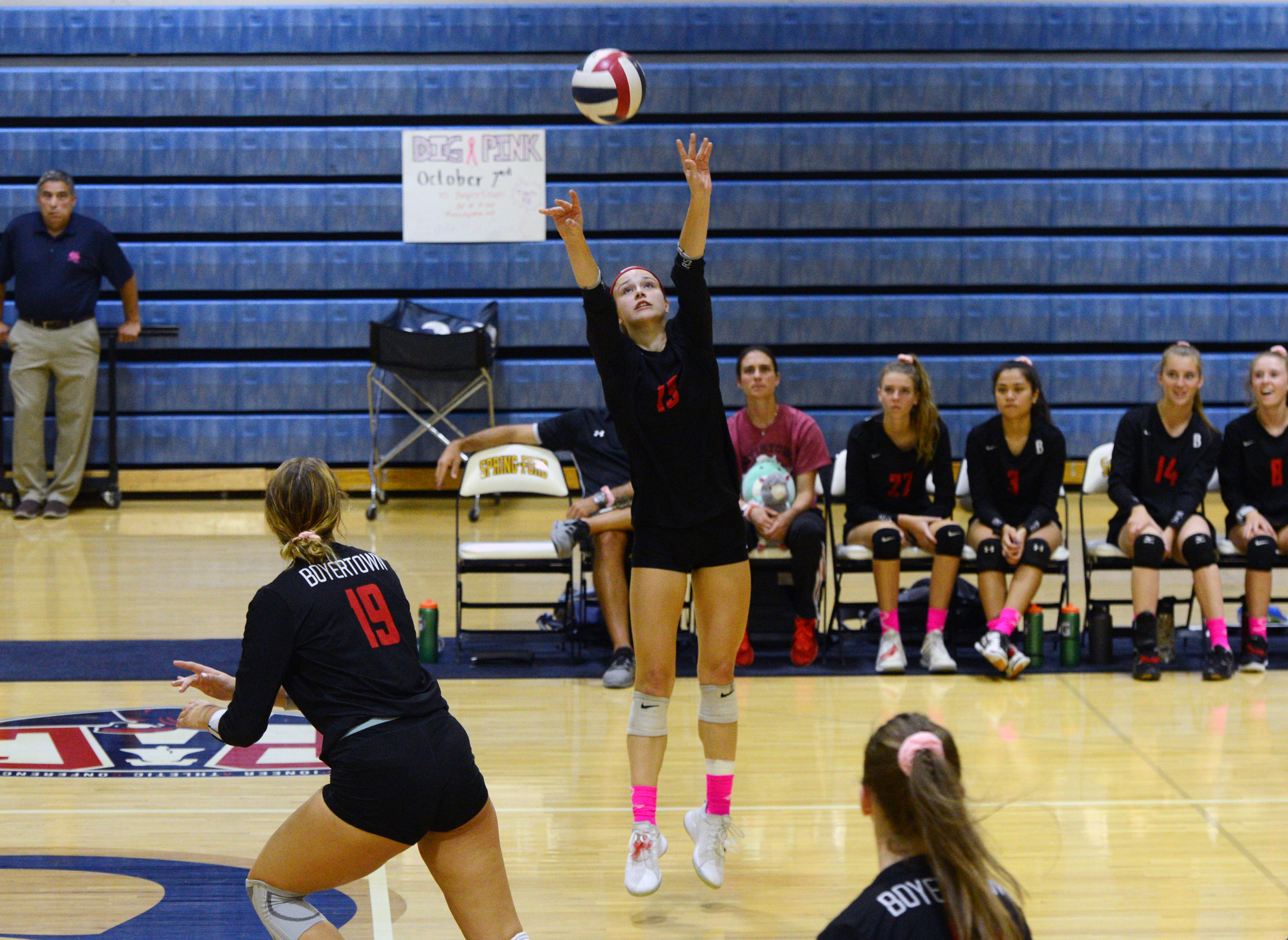 Emma Ludwig led the fifth-seeded Bears (20-3) with 16 kills and also chipped in a team-high 23 assists along with 22 digs and four aces. Adrianna Derstine racked up 13 kills and Emily Wolfe had 11 to go with 21 digs and three blocks. Julia Smith led the Bears with 41 digs and Grace Rinehimer contributed 21 assists.

Sophia Gammarino had 11 kills and 23 digs for the 12th-seeded Vikings (14-6), Vanessa Hutchinson made 25 digs and Annamarie Marsh dished out 24 assists.

Boyertown will visit fourth-seeded Pennsbury, a 3-0 winner over Ridley, in the quarterfinals Saturday at 12 p.m.

“It’s really nice for the kids,” said Boyertown coach Mike Ludwig, whose team had a bye in the opening round on Tuesday, while Upper Merion defeated Penncrest 3-0. “A lot of these kids have been with us from the beginning. They have the mentality of wanting to win. They have the desire to win and they play together.”

The two teams had played to five sets twice this season with the Bears winning both times, including a victory in the Pioneer Athletic Conference semifinals last Tuesday.

“The surprise was that it didn’t go five,” said Upper Merion coach Anthony Funsten. “They (the Bears) played really well. They put the pressure on us the whole game.”

This time, neither team led by more than three points in the fourth set that also had eight ties. But the Bears finally put the match away when Ludwig passed to Wolfe for a kill.

Earlier, Wolfe started the match with a block and a kill on the first two plays and the Bears jumped to an 8-1 lead and cruised to the first-set win.

Then the Vikings scored the first four points of the second set and trailed only once at 9-8. They scored eight straight to seemingly break the set open at 23-13. The Bears went on an 8-1 run to make a game of it, but Janee Heppner finally set up Aryana Chambers for the winning point.

“We knew after the first set that they were going to play better,” said Mike Ludwig. “They played really nice defensively and got some extra swings and that allowed them to build some confidence.”

In the third set, Boyertown broke away from a 7-7 tie with five straight points, including kills by Derstine, Jess Ahart (six kills) and Wolfe and the Vikings never got closer than three.

“When we mix it up on offense, it makes a difference,” said Mike Ludwig. “When they have to defend the entire net and not just one or two people. The setters mixed it up. So much of the game is about passing. The girls in the back row did a really nice job passing.”

Last year, Boyertown also had an opening round bye and then lost 3-0 to Pennsbury. Now the Bears, in just their third varsity season, need one more win to earn one of the district’s five spots in the PIAA Tournament.

Upper Merion had been showing improvement throughout the course of the season after starting off with every player except Bahmueller in a new position.

“Another great year for Upper Merion,” said Funsten. “We’re still getting better. It’s been an interesting year. It’s a shame we couldn’t still be playing because our best volleyball is still ahead of us.”

Unionville shakes off early rust, sweeps D-West in second round of Districts
Abington stuns Spring-Ford in final minute for District 1-4A victory