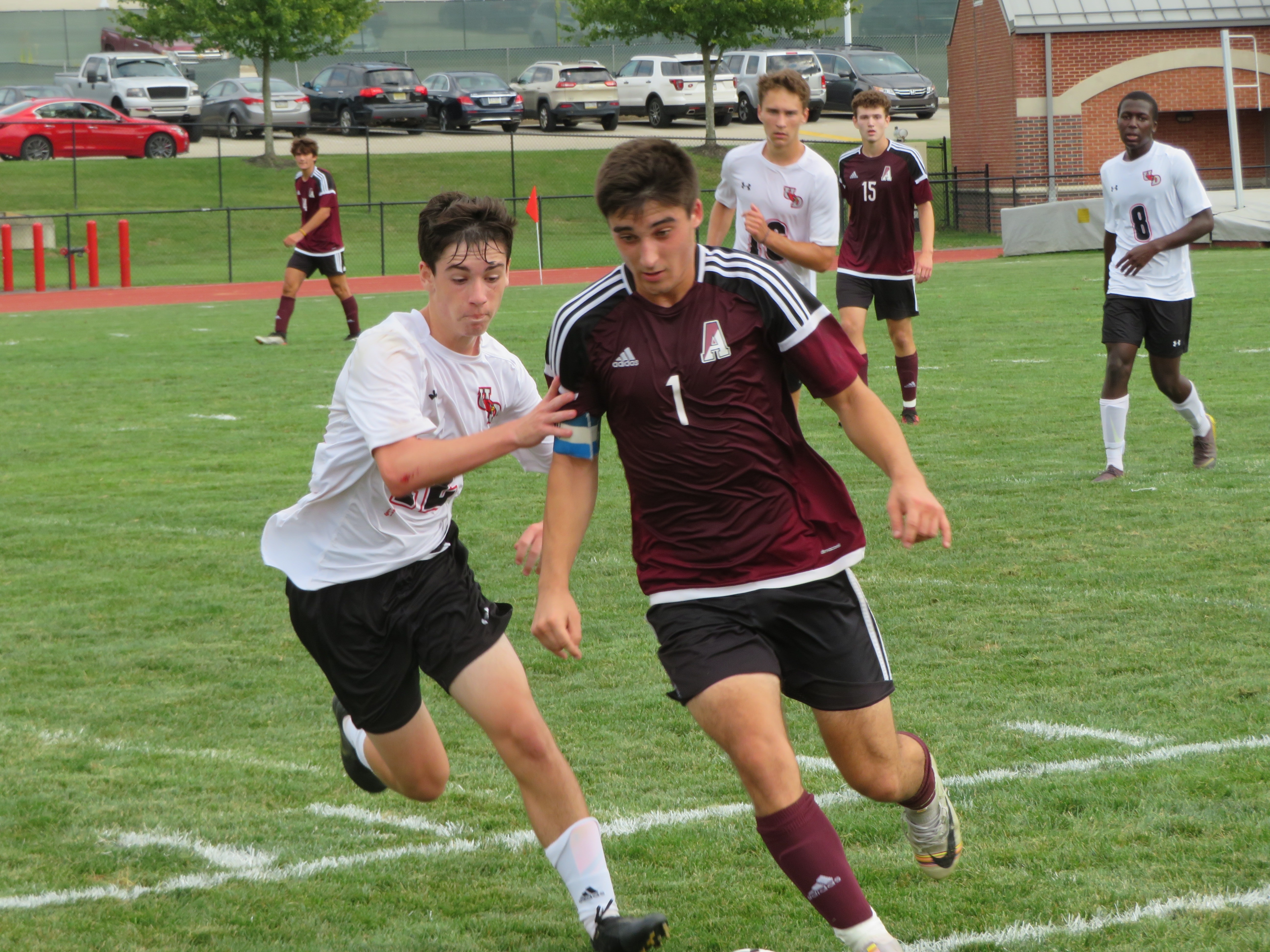 ROYERSFORD >> Webster’s Dictionary defines stunned as the action of depriving one of consciousness, feeling or strength “by or as if by a blow, fall, etc.”

The blow felt by the Spring-Ford boys soccer team on Thursday night though was much, much more.

Deadlocked at two goals apiece with just under a minute to play in regulation and the ball deep in ninth-seeded Abington’s defensive third, Ghosts’ midfielder Nevin Baer found himself on the end of a long, flighted ball in stride and in space.

Baer beat Rams goalkeeper Tommy McPoyle on the 1-v-1 and slipped the ball into the back of the net to complete his team a 3-2 come-from-behind win over eighth-seeded Spring-Ford in District 1 Class 4A second-round action.

By all accounts, the goal stunned just about everyone in attendance who had seen the Rams build a 2-0 lead early in the game.

Rams head coach Brent Kissel, like the 11 Spring-Ford players on the field and coaches and players on the bench, could only stand on the touchline in shock, while Abington coach Randy Garber, eyes wide in almost disbelief, took a solid moment before erupting in celebration with his team.

“We talked that Baer is their best player, and we just couldn’t let him get out, and he got his opportunity and finished the game,” Kissel said after the match. “Their style seemed to be very direct. They liked to get the ball up (the field). They’ve got a lot of fast guys up top, and we said that if we get stuck playing that game, we’re going to have trouble. At the end, we just got stuck in that game and couldn’t calm ourselves down.

“We lost that edge in the second half there.”

“That’s the best team we’ve played all year as far as technical ability, as far as speed,” Garber said. “If we didn’t hang in there it could have been 4-0 in the first half. I mean, [the Rams] are a very, very good team.”

“We just hung in there and were patient, but what a great team,” he added. “They are an excellent side.”

Spring-Ford was widely considered a favorite to head back to the state tournament after last year’s run. However, the Rams saw their early 2-0 lead diminish before their eyes after Gavin O’Neill buried home a flighted cross from a streaking Baer down the left side of the field on a header past McPoyle to cut the deficit to 2-1 before the half and Gibbs buried a second-half penalty kick to knot the match at 2-2.

Spring-Ford was still very much in the match though, and had the better of the chances through most of the second half. Brandon Duke’s shot minutes into the second half would have given the Rams a 3-1 lead but sailed just wide left of the goal and out for a goal kick.

A Colton Pollock one-timer off a cross midway through the half would have done the same, but again the shot sailed just wide. And in what may have been the deepest cut of the night — until Baer’s late-match heroics, that is — Andrew Merchant couldn’t capitalize on a wide-open net when his shot somehow found its way into Abington goalkeeper Sam Dumas’ hands.

For Kissel, the lack of luck when needed was something that seems to have stung Spring-Ford on a couple of occasions this season.

“We kind of felt like this year the ball just didn’t bounce our way in certain situations,” Kissel said.

“We talked about finishing our chances and we finished the two in the first half, and they were great, but we had a couple there [in the second half] that we didn’t.”

Ethan Mossip opened the scoring for the Rams in the 13th minute. Andrew Merchant sent a shot from distance and wide to the right that caromed off the crossbar and fell right to an awaiting Mossip, who one-timed it home for the 1-0 lead.

Mossip again got into the scoring about four minutes later, firing a pacey through-ball off of an Abington defender and right to Duke, who streaked past his defender and beat another defender, as well as Dumas to make it 2-0. Abington closed the gap on O’Neill’s header, but Spring-Ford still held the better of the play heading into halftime.

The Ghosts came out much stronger to start the second half and maintained long periods of possession in the Ram defensive third. However, as the match started to settle in, the flow seemed to once again head into Spring-Ford’s favor — until Merchant took Baer down in the box to set up Gibbs’ kick from the spot, that is.

“I think we just lost our heads,” Mossip said. “We started playing [Abington’s] style of play. We started kicking it long like they did, and it just got to us. They got those two goals in [to tie the match], and we just couldn’t come back.

“It was a big one for us and we came out strong. Too bad we couldn’t finish it in the end.”

NOTES >> Spring-Ford was forced to go into the match without returning all-state forward Colin Trainor, who was sidelined with a knee injury and in attendance on crutches. . . . Spring-Ford finished the night with six corners to just one for Abington. . . . The Ghosts were also called for 17 fouls, while the Rams were called just four times. McPoyle finished the night with five saves, including two athletic goal-line saves in the second half to keep the match tied.