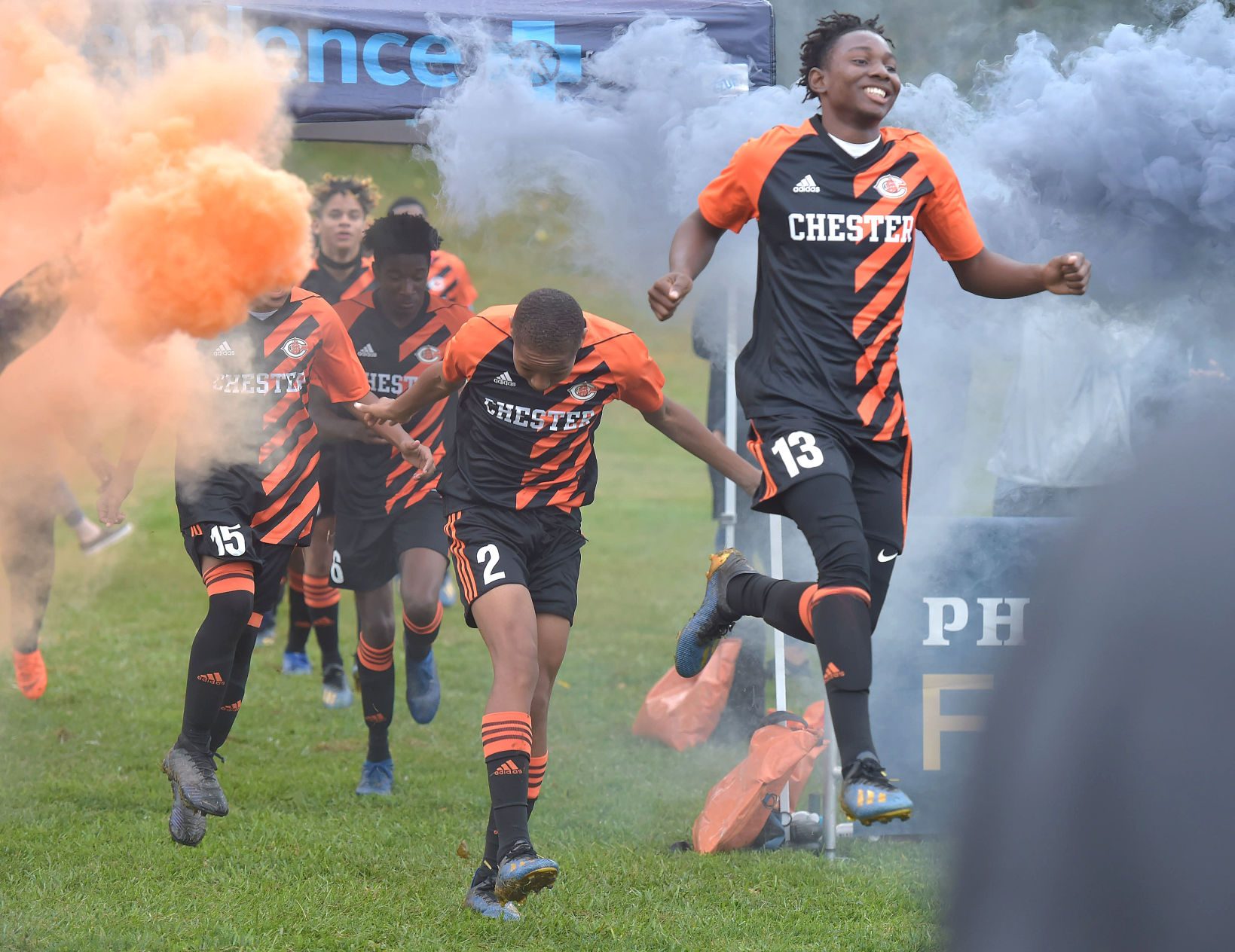 The Chester boys soccer team takes the field Tuesday afternoon at STEM Academy with support and pageantry from the Philadelphia Union Foundation. The Clippers were playing their first home game in the program's return after a 30-year hiatus. (Pete Bannan/MediaNews Group)

CHESTER — Chris Massena isn’t sure when he first picked up a soccer ball. He figures it was around the time he started walking. Growing up in Haiti, it was the thing to do.

But when Massena emigrated to the United States in 2012 and settled with his family in Chester, practicing alone with a ball was his only soccer option. Finding a pickup game for kids his age, much less a club, wasn’t easy, in a town with two major entities at opposite ends of the soccer spectrum: A world-class stadium housing a pro soccer team, and a high school with legendary athletics that excluded soccer.

Massena has found his way athletically, including on the basketball court, where he cracked the Clippers rotation as a sophomore. Eventually, Massena would learn that he wasn’t the only one stranded in Chester’s soccer desert with an affinity for the beautiful game.

Tuesday afternoon, among his community, he helped make history.

Massena scored Chester’s opening goal in the program’s first home game after a three-decade hiatus, a milestone day as the community looks to rekindle the soccer flame at the high school level.

Many of the details of the game will fade with time (in the same way that the exact date of scholastic soccer’s fade into oblivion at Chester is now recorded as only, “in the 1980s”). Chester lost, 8-2, to Penn Wood, Massena and Ibrahim Kamara providing the goals, the latter from the penalty spot. It wasn’t Chester’s first game but its third this season. And it’s not varsity competition but JV.

But the ambience, with the Clippers running out to the field at STEM Academy in clouds of orange and black smoke fired by members of the Philadelphia Union Foundation and remarks by Chester-Upland School District superintendent Dr. Juan Baughn, had the feeling of a special occasion.

That’s certainly how it felt to one the central figures of Chester’s soccer revitalization.

“Everything has come full circle,” Pat Trippley-Demiranda said. “All the work that we have done and the planning and things we have done, when everyone was saying, ‘what are you doing playing soccer? They don’t play soccer in Chester.’ It’s now come full circle. I’m so very proud, so proud.”

Trippley-Demiranda has worked for more than a decade to keep alive the name and legacy of her son, William, a Chester native and soccer player who attended Shipley School. He was killed in Chester in 2004, between seasons playing for Elizabethtown College. Though William Trippley succeeded on the field, Pat wanted to make sure other parents didn’t have to go the lengths that she did, instead bringing soccer to Chester, via Chester City United. Many of the players on the field Tuesday were introduced to the sport by some combination of Trippley-Demiranda’s work and that of Chester Upland Youth Soccer, which uses soccer to teach valuable life skills to young players.

It’s only through the work of such people that Tuesday’s feat was possible. While the Union could’ve tossed jerseys on high schoolers years ago just to say Chester had a soccer team, the community approach has valued gradual, incremental change that is broad in scope and deep in impact.

“My favorite thing is driving by one of our school sites and seeing kids playing at recess or playing on the mini pitch at Stetser Elementary on a Sunday, and that says our philosophy is starting to take hold,” said Brendan Grady, the executive director and co-founder of CUYS. “Our philosophy at Chester Upland Youth Soccer has always been, let’s start small, let’s work with the youngest kids and try to grow the game organically over time to the point that we can have enough interested players to participate in a high school game. It’s been fantastic to see the maturation of the game.”

The team is primarily comprised of ninth-graders, many of whom have played since elementary school. The plan, athletic director Andre Moore said, is to keep the boys team at JV next year and elevate to varsity competition in 2021.

Due to interest levels, the girls program is one year behind that schedule, with 12 student-athletes committed to a JV slate next fall, with varsity targeted for 2022. Under coach Scott Spangler, the boys program has an offseason regimen to get players chances to improve that would otherwise be lacking.

Moore points out that for all the deserved celebration Tuesday, soccer has been played in Chester elementary and middle schools for the last four years, the brick-by-brick foundation for the festivities.

“There’s a lot of hard work from people on the outside to make this happen,” Moore said. “We’ve had a lot of support throughout the community – the Philadelphia Union, the Trippley Foundation. It was a lot easier when you have people like that in your corner, including the Chester-Upland School District.”

The Union have increased their community investment in recent years, along with waterfront neighbor Power Home Remodeling Group. That effort built the pitch at STEM, the mini-pitches, plus jerseys and operational support for events like Tuesday.

Whatever the score, it’s a starting point. That’s what Spangler, a three-time All-Delco and two-time Daily Times Boys Soccer Player of the Year at Strath Haven, was looking for.

“We want to make sure that we compete,” Spangler said. “You go into every game thinking and believing that we can win. Whether the results are that or not, these kids still walk out with good spirits. I think the goal is that we improve on the soccer side each game.”

Tuesday’s game makes the pursuit of soccer in Chester more real. The Union can seem distant in its part of town. But grafting Chester’s signature orange and black onto a soccer field offers the community ownership of the project.

“There’s a buy-in now,” Trippley-Demiranda said. “Now they see they can go and actually play for this school. When my son was playing soccer, he couldn’t play for the school; there was nothing here. Now they can play on a club team and know that they can come home and play on their high school team and have their family see them. It’s important.”

Massena shows that it’s possible to fit soccer into the Chester sporting landscape.

“We’re going to make it a soccer city,” he said. “It’s a basketball city right now. We want to make it both.”