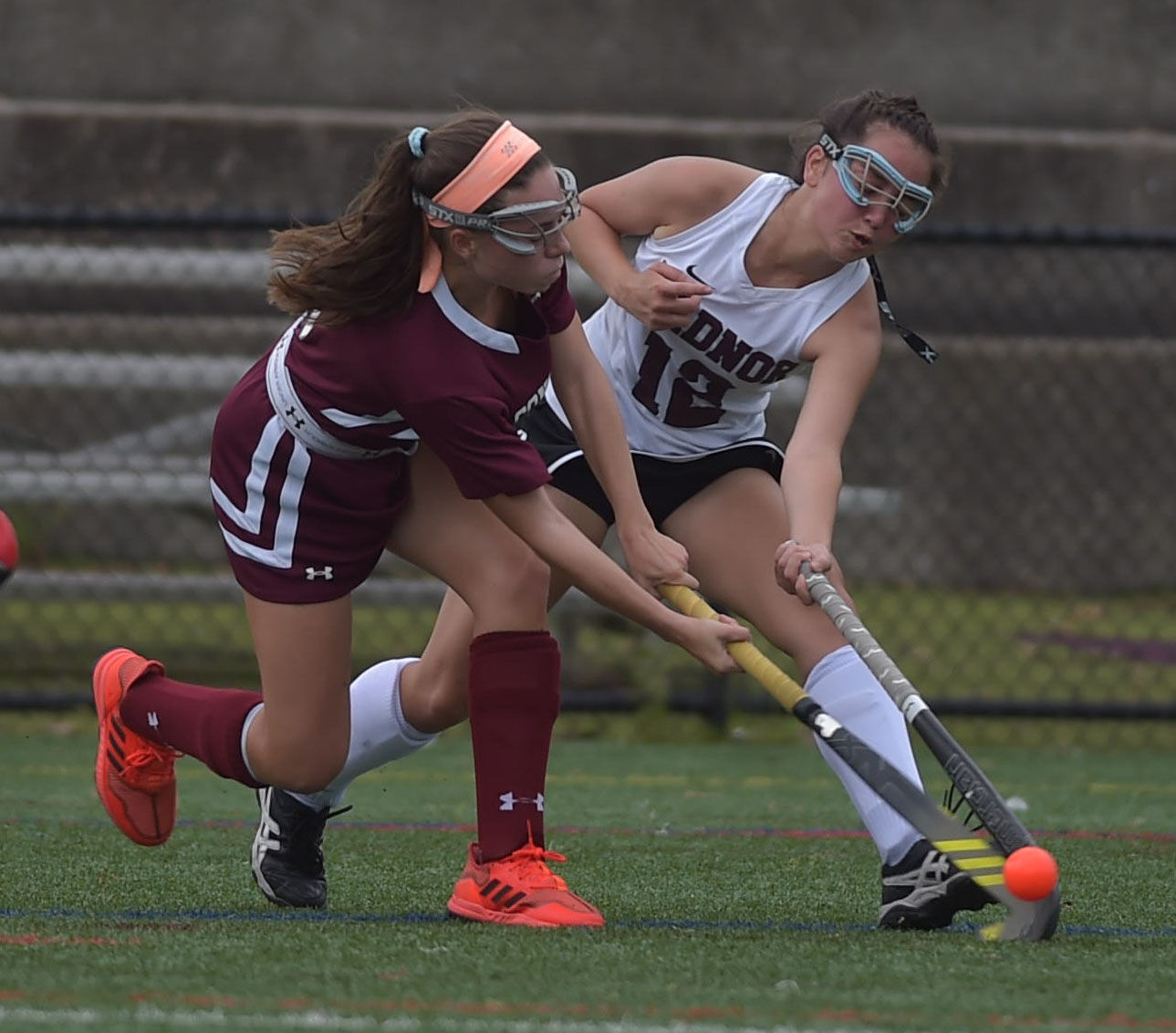 Radnor's Genevieve Mehra, right, battling Conestoga's Sarah Rogalski in a match this season, scored twice Tuesday to lead the Raiders past Strath Haven, 3-0, in the first round of the District 1 Class 3A tournament. (Pete Bannan/MediaNews Group)

“We started playing together when we were in third grade,” Lowry said.

The trio didn’t plan to be high school hockey teammates for the final time Tuesday. They helped the No. 1 seed Raiders (16-2) to a 3-0 victory over No. 16 Strath Haven (7-10) in the opening round of the District 1 Class 2A tournament at Encke Field under a heavy rain.

Radnor will host No. 9 Villa Maria (11-8), the defending district champion, in a second-round match Thursday afternoon. The Hurricanes defeated No. 8 Phoenixville, 2-0, in their playoff opener.

Haley Kemp opened the scoring for the Raiders in the sixth minute of play. Mehra added a goal seven minutes later to set the halftime score at 2-0, then came back with another tally in the third minute of the second half.

DeCain, Lowry and Mehra have played together with the Mayhem club team. Tuesday afternoon, they were among the Radnor players creating mayhem at both ends of the field.

“Since we played (Strath Haven) earlier in the season (a 3-1 Central League win) they knew a lot of what we like to do,” said Mehra, who is headed to Johns Hopkins University to be a pre-med major and play field hockey.

Kemp’s goal came on a scramble in front of the Haven cage, while Mehra was in the right place at the right time to knock home her two goals.

Strath Haven goalie Marlaena Ciabattoni turned away a penalty stroke in both halves, the first off the stick of Hope Delaney and the second by DeCain.

“Guess we’ll be doing a lot of work on penalty strokes (Wednesday) at practice,” DeCain said.

Rory Caulfield had the most dangerous scoring chance in the second half for Strath Haven, which forced Raiders goalie Rory Harper to make only two saves.

“We recognized what we needed to do to move the ball better today,” said Lowry, who will play at the University of Louisville.

DeCain is headed to the University of Richmond.

“We’ve had trouble at times with our dribbling,” she said. “Today we tried to make sure we were passing the ball better and moving it down the field.”

Radnor had a high seed in the 2018 district tournament but was knocked out in the second round by Merion Mercy.

“I think all of us will be looking forward to practice (Wednesday),” Lowry said. “And I know we all want to be ready for our next game.”