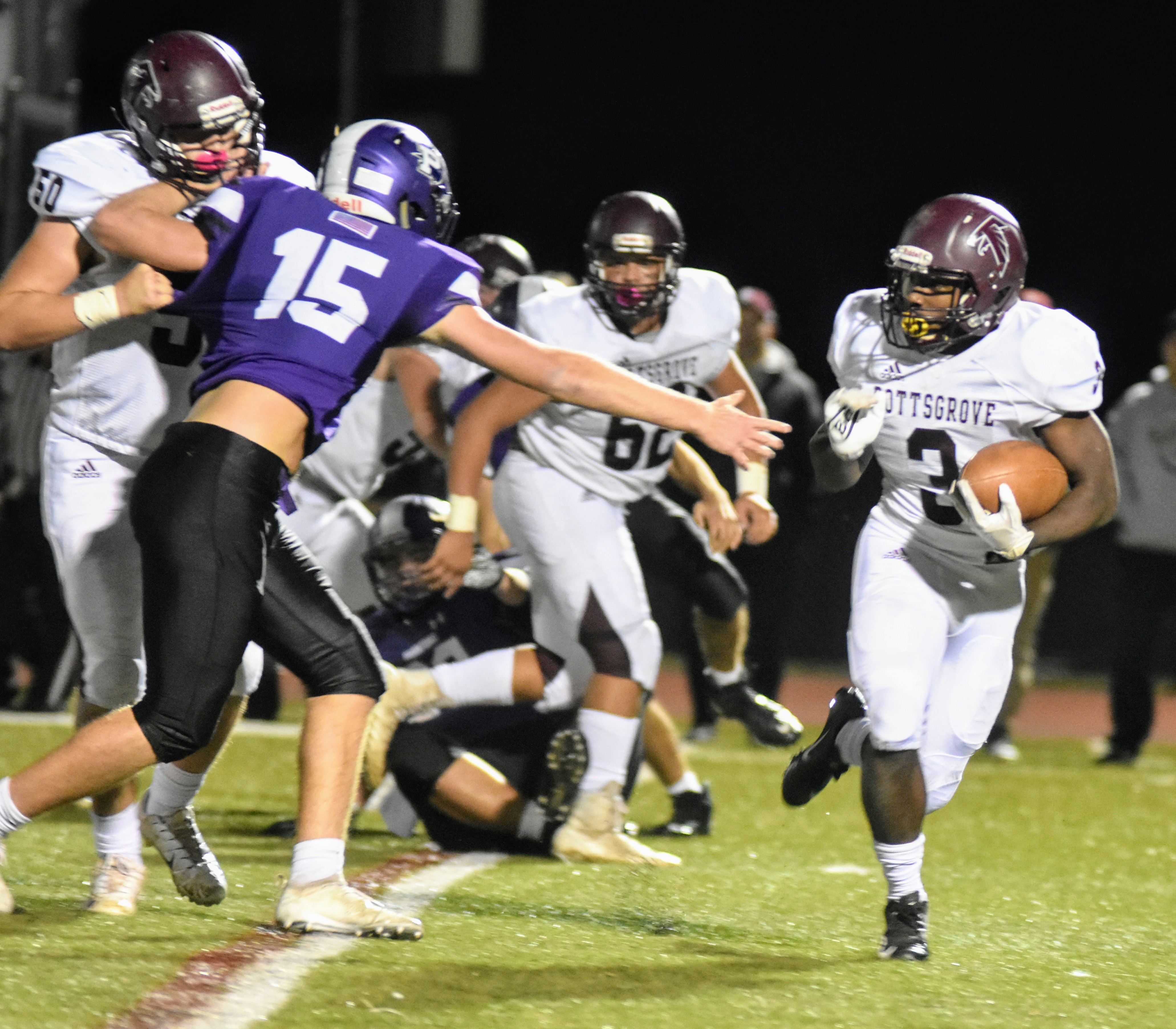 PHOENIXVILLE >> Joe Silvestri is Pottsgrove High’s quarterback this season. He is a 6-foot-4, 175-pound senior, but he does not glow in the limelight like some of the other area quarterbacks.

But Silvestri engineers the offense well. And what Pottsgrove likes to do, is run the football and play defense. That is what the Falcons have done successfully again in 2019.

On Friday night, Pottsgrove traveled to Phoenixville and fell in seven-point hole at the outset. But the Falcons stuck to their game plan and made a comeback with authority that resulted in a 30-13 Pottsgrove victory at Washington Field on Phoenixiville’s Homecoming and Senior Night.

Senior running back Isaiah Taylor rushed for 139 yards and two touchdowns in the first half alone as Pottsgrove took a 17-7 lead at halftime. Taylor scored on runs of seven and then a big 82-yard burst with 9:06 remaining in the second period. For the night, Taylor rushed for 194 yards on 29 attempts.

“I am very happy,” said Silvestri. “We have a very good team. I am glad to finally win and get the offense going. That is the right way to play offense.”

Phoenixville quarterback Jack Pizor put the Phantoms on the scoreboard with a 60-yard touchdown pass to all-purpose senior back Anthony Stevenson down the left sideline with 9:17 left in the opening quarter. Jack Kelly kicked the point after for a 7-0 lead.

Then the Falcons went to work.

Junior Luke Kaiser, who doubles as a soccer goalie, booted a 36-yard field goal to cut the deficit to 7-3 with 4:36 left in the first quarter. Taylor’s first score came on a seven-yard run up the middle behind his blockers and Kaiser’s point after made it 10-7 Falcons with 2:47 to go in the first quarter.

After Taylor’s long run made it 17-7, Pottsgrove scored in the third quarter on seven-yard toss from Silvestri to junior running back/free safety Rylee Howard scored to make it 24-7.

The Falcons closed out their scoring on senior cornerback Narell Brown’s 20-yard interception return for a TD with 3:17 left in the fourth quarter.

The Falcons got other defensive work from the likes of senior tackle Darrian Seaman, senior, Max Dopwell, who had a sack;  and linebackers Jadore Colbert and Max Neeson. Colbert, a junior, had a first-half interception along with a number of tackles. Neeson, a sophomore, was in on numerous tackles, several for losses.

Howard and Brown had second-half picks for the Falcons (5-4 overall, 4-1 Pioneer Athletic Conference Frontier Division). They finished in second place in the division, going into next weekend’s crossover games, with the win over the Phantoms and are also looking forward to the District 1-4A playoffs.

“Our defense has been good all year, and defense wins championships.”

“It was a good win for us,” said Pottsgrove coach Bill Hawthorne. “Luke (Kaiser) is such a true weapon. He turns the field. Us and Phoenixville kind of mirror each other. We both have a lot of guys with injuries. We are getting better with every play. We have a lot of guys playing out of position. I’m very, very proud to be their coach and we as coaches are.”

Hawthorne praised the Phantoms for being a very good team that is well-coached. The Falcons countered with strong efforts in all three phases of the game, offense, defense and special teams.

“We had a very tough early schedule,” said Hawthorne. “That was the whole plan to make us better for this time of year.”

The Phantoms dropped to 3-6 overall and 2-3 in the Frontier Division. They made some plays, but not enough of them throughout the entire game and too late in the contest.

“We are not consistent enough,” said Phoenixville coach Don Grinstead. “We made plays at times but too late.”

Grinstead applauded Pottsgrove for what it does on the football field year in and year out.

“They have a good program,” said Grinstead. “I respect what they do and they do it the right way. They may not be having a typical Pottsgrove season, but they have a Pottsgrove culture.”

The other Phoenixville TD came on a 42-yard pass from Pizor to senior Brady Aselton with 10:05 left in the fourth quarter to make the score 24-13 at the time. Aselton caught five passes on the night and also played a good game at defensive end.

Notes >> Phantom sophomore defensive lineman Roman Ciaverelli had a sack and fumble recovery, and senior defensive end Matt Johnson also had a sack. … Phoenixville lineman Dan Gray was strong up front, along with sophomore Sam Fisher at linebacker, and junior Max Strunk in the secondary. … Sophomore Tre Davis did his usual good work getting involved at defensive back, special team kick returns and on offense. …Phoenixville honored the senior members of the Phantom Marching Band, the cheerleaders and football team. … Sophie Collet was crowned Homecoming Queen and Amir Colter was Homecoming King.