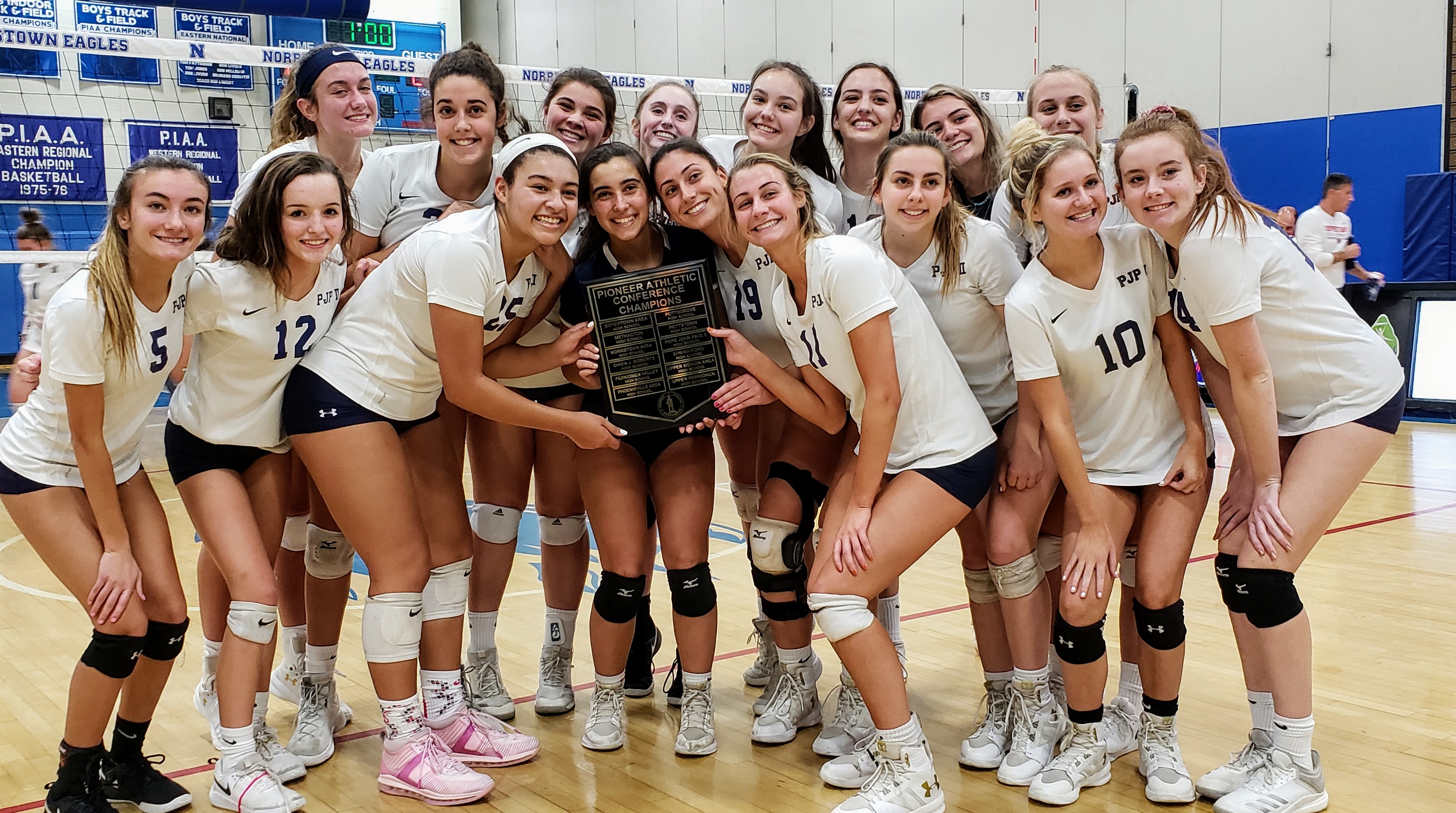 “Our kids come in prepared,” PJP coach Ryan Sell said. “A lot of these kids start playing when they’re in fifth grade, so we have an advantage with that. We work really hard. The kids work. The kids love it. We have optional 30-minute practice after our hour-and-a-half practice right now and most of them stay because they just want to play. It’s a testament to the group, especially the seniors. We have four — that’s a smaller group for us but they’ve done such a great job for us. It’s really great. I’m going to miss them.”

Not much was separating the PAC rivals during the first two sets, which both required more than 25 points to win.

In the opening game, neither side ever led by more than two points. The Bears were ahead for the first half of the set, but PJP rattled off four straight points to turn a 14-12 deficit into a 16-14 lead. The rest of the set stayed tight, with the teams tying at 16, 17, 18 and 24 before the Golden Panthers scored the final two points to take a 1-0 lead, 26-24.

The second set was another tight one with the teams always being within three points of each other. Pasquale served during a PJP four-point run to take an 18-16 lead, but Boyertown’s Emily Wolfe took over at the end. Trailing 24-22, Wolfe scored back-to-back points to tie the game at 24 and, after the teams traded points, scored two more to give the Bears a 27-25 win and tie the match, 1-1.

The second set was the first time all season Pope John Paul lost a set in a PAC match.

The Golden Panthers responded with their best run of the night, scoring 10 of the first 12 points in the third game.

“We didn’t change anything up,” Pasquale said. “We were just really working hard out there.”

Boyertown, however, didn’t give up. With Emma Ludwig serving the Bears battled back to within three, 12-9. PJP responded with a run of its own, going ahead 15-9. The Bears fought to within one, 17-16, but could never get even. The Golden Panthers stayed comfortably ahead before winning, 25-21, and taking a 2-1 lead.

“We’ve lost sets before,” Sell said. “I was just hoping we could battle through. Then we came out and started really fast, then they scored like five straight points on us and it was right back to where it started.”

The championship-clinching set got off to another fast start for PJP, which scored the first five points. Boyertown responded with six straight to take the lead and another close game was on. It wasn’t until Pope John Paul scored four straight points, taking an 18-12 lead, that either team took control.

“I’ve been working on that a lot in practice,” Pasquale, who had two aces during the four-point run, said. “That specific spot, actually. It just so happened that the setter was there.”

From there, the Golden Panthers maintained their lead before winning the PAC title, 25-21.

“(PJP has) people that can hit from all over the court,” Boyertown coach Mike Ludwig said. “They have solid defense. They’re just a good volleyball team. It’s why they’re ranked No. 1 in the state in 3A. They’re a handful. We knew that. We thought our kids did a really nice job. I thought we had a really good gameplan. They countered some things that we were doing and it was a good match.”

“Our kids fought and they left everything they had out there on the court,” Ludwig said. “PJP is a really nice team and they had a little bit too much firepower for us tonight. I thought our kids fought every set and never gave up. I was real proud of them for what they did.”

Conestoga edges D-East in wind-swept battle of titans
Football Friday Five to Watch: Central League title may be up for grabs as Haven visits Garnet Valley