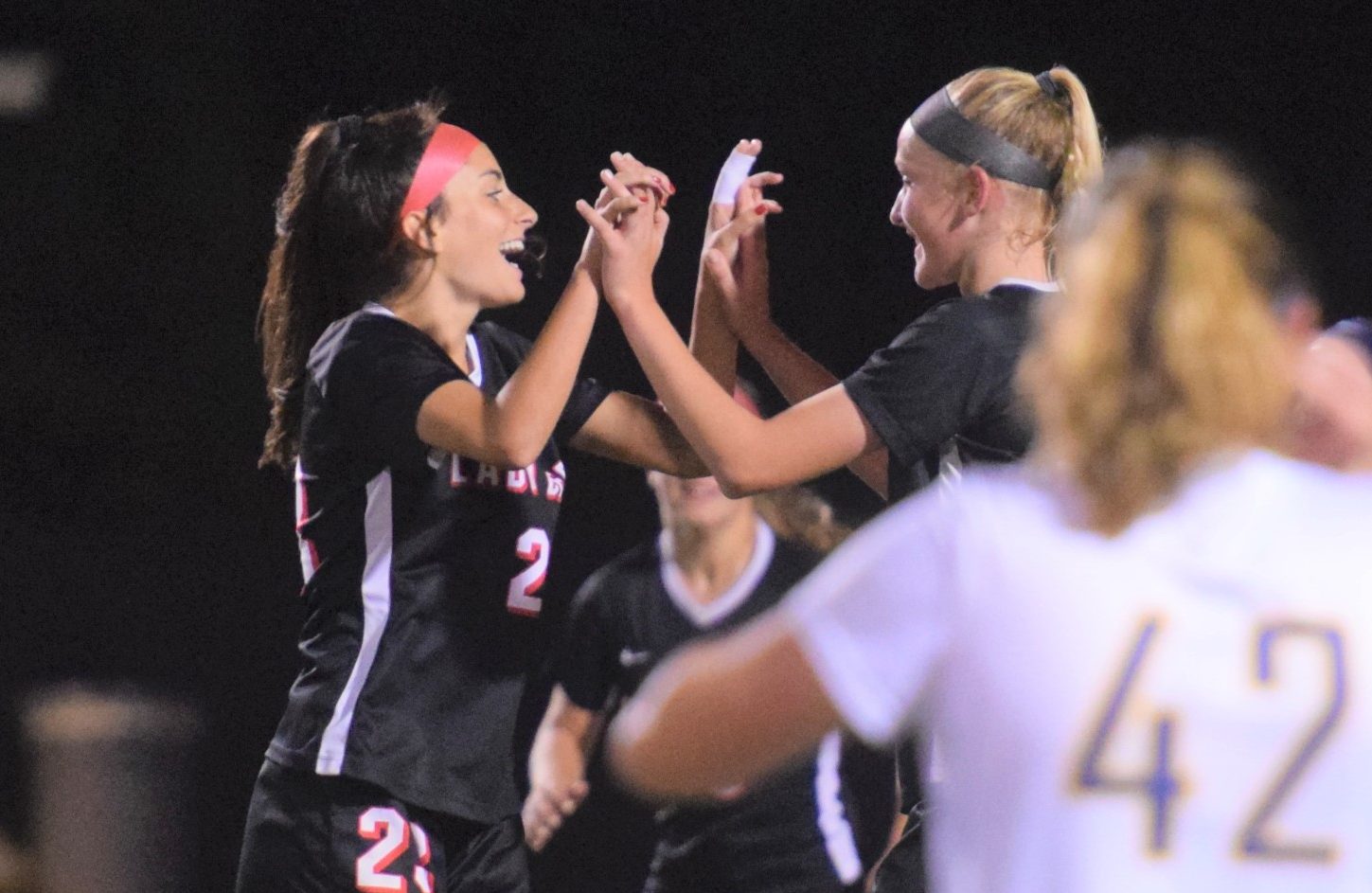 BUCKTOWN >> When the Boyertown and Upper Perkiomen girls soccer teams met in the regular season on Sept. 10, it took 97 minutes to settle the score.

Back then, the Bears were still finding their identity.

Who the Bears are is a dynamic attacking team with the right blend of playmaking and speed to light up the scoreboard.

Boyertown’s identity was on display Tuesday night in its Pioneer Athletic Conference semifinal with Upper Perkiomen while rolling to a 4-0 victory at Owen J. Roberts to reach Thursday’s championship game against Spring-Ford.

Junior forward Samantha Goffice had two goals and an assist, junior Kayley Mattis scored the Bears’ opening goal in the 7th minute, while Boyertown’s second came on an own goal following a Moyer free kick from midfield in the 16th minute.

“Our work ethic was really up, and we were really connecting in the midfield,” Goffice said.

“I feel like tonight was a really good night. We played really well together and moved the ball really well,” Moyer said. “I feel like we had control of the ball most of the game. We have to do that on Thursday and every game.”

No. 1 seed Boyertown (18-1) meets No. 3 Spring-Ford – a 2-0 winner over Pottsgrove in Tuesday’s other semifinal – back at OJR on Thursday at 5 p.m. in the opening game of a PAC soccer championship doubleheader.

Currently No. 2 in the District 1 Class 4A rankings, Boyertown’s time is clearly now. Upper Perkiomen, on the other hand, was something of an early arrival in making its first appearance in the Final Four since 2013.

The Indians (13-6) feature nine underclassmen in their 15-player rotation – including three of four starting defenders (sophomore Lindsay Bieler and freshmen Lauren Powers and Jada Roderick) – so the PAC playoffs were bound to be new. But they even were for four-year starting goalkeeper Hannah Landis.

“I know when I was a freshman, I was really nervous, so I get what that’s like and obviously we weren’t in PAC playoffs. It was a great experience for them to learn the higher competition and what it’s going to take if we want to be great.”

Upper Perk is the No. 8 ranked team in District 1-3A and in line for a home playoff game next week.

Even in defeat, head coach Mike Freed was full of pride for a team he thought was ‘going to be a year away.’

“I have no qualms with the way this group has played,” Freed said. “They’ve exceeded expectations in every way imaginable.”

Boyertown coach Bill Goddard would say the same thing of his team that looks like it will be playing into November.

The Bears, who have scored four-or-more goals in eight of their last nine matches, got on the board when Goffice turned on the jets down the right side and shot past Landis while Mattis smashed it into the empty net on the doorstep for a 1-0 lead.

Nine minutes later, Moyer’s free kick from midfield into the penalty area was bound for Goffice but a UP defender’s glancing header sent it goalward for a 2-0 Boyertown lead.

The Bears’ third goal was a thing of beauty with quick-passing interplay between Madison Monka and Camilla Kuever all the way from the Bears’ half before Kuever slipped Goffice behind the defense for a superb score and 3-0 lead.

“I was standing there moving and trying to create space, and as I’m watching it I was thinking, ‘Oh my god, we’ve never done that before,’” Goffice said. “Their movement created space for me because their defense separated in the middle and Camilla was able to slip me through.”

Boyertown finished its scoring when freshman Samantha Devlin did well to carry down the right side and centered for Goffice who lofted her shot from the edge of the penalty area with 21 to play.