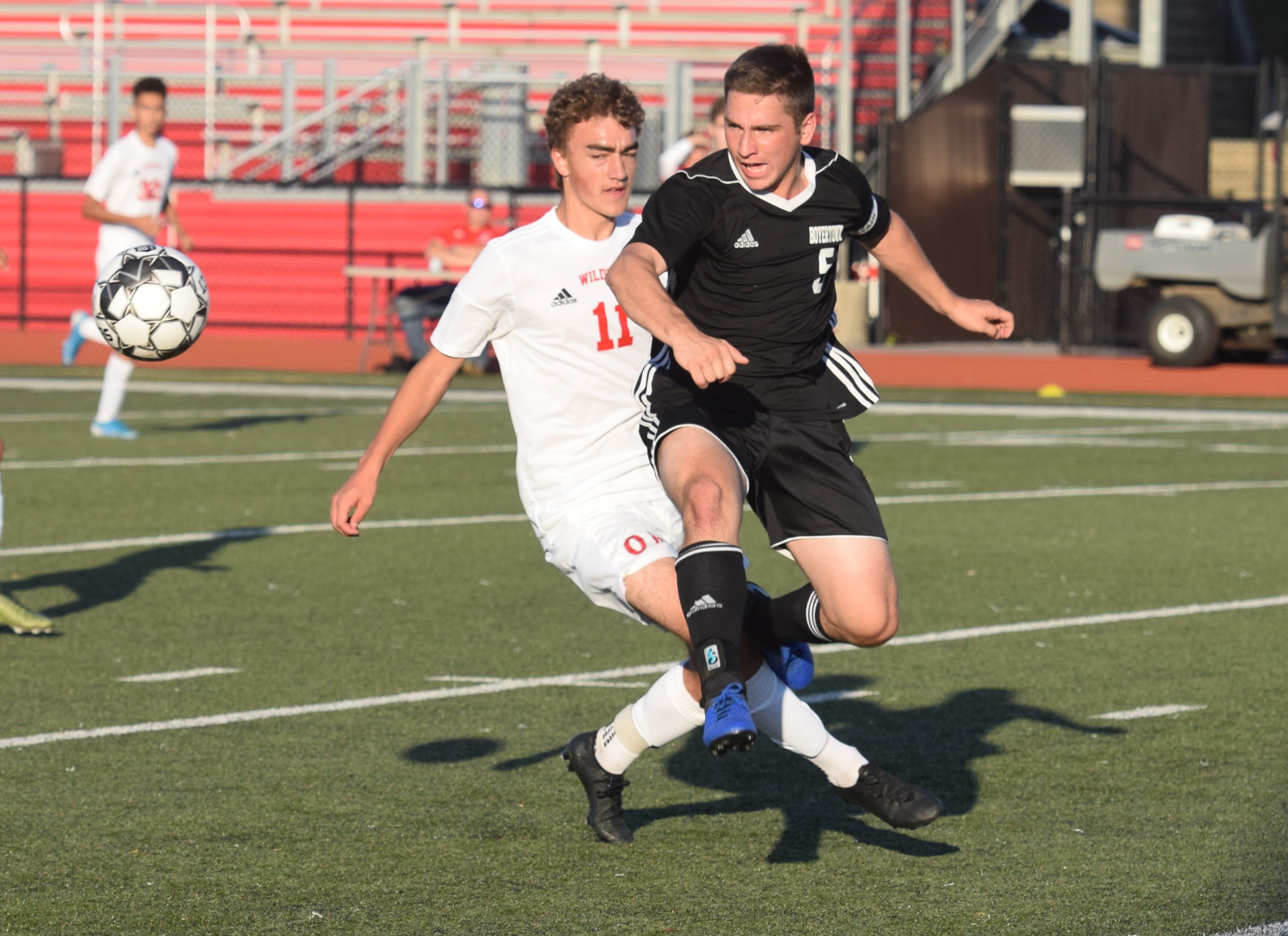 BUCKTOWN >> There was never a doubt how Tuesday afternoon’s PAC semifinal between Boyertown and Owen J. Roberts would be decided.

It was just a matter of who would have the upper hand.

Eighty minutes of regulation wasn’t enough to determine that, but Landon Wenger’s header with 5:21 to play in overtime sent the top-seeded Bears (16-1-2) into Thursday night’s championship game by a score of 1-0, stretching the two teams’ streak of games against one another decided by a single goal to an even dozen.

“It’s always a good game when these two teams get together,” Wenger said after the fact.

Wenger got the second touch off a perfectly struck corner from Nick Willson. Willson found his intended target, Ryan Foskey, who deflected the ball to Wenger, whose header brought the semifinal contest to an end after almost 90 minutes.

“I’m always looking for [Foskey],” Willson conformed. “We practice that every day, we look to find back post, or crashing near.”

While Boyertown’s game-ending play was picture perfect, it was equally bitter for OJR, the underdogs on paper who nonetheless controlled the majority of the game.

“Absolutely no disrespect to Boyertown, but I thought we were the stronger side tonight,” lamented OJR coach Eric Wentzel. “I don’t know that we are a better team, but we had more chances.

“For long stretches, we dominated play. I couldn’t be prouder of my team.”

For such a tightly contested series of games, the recent history of the Bears/Wildcats series was relatively one-sided, with OJR taking eight of the past 11 contests, with one draw between the sides.

But on Tuesday, it was Boyertown, currently ranked No. 3 in the District 1-4A standings, facing unprecedented pressure to break through. The predetermined neutral sites for PAC playoff games meant that despite their position as the top seed, the Bears would for all intents and purposes be the road team.

The hosts (in name only) weathered a couple of strong opportunities as the Wildcats controlled the opening half. Bears goalie Mason Kurtz fought off a low shot in the 12th minute, and managed to tip Ethan Gawlik’s left-footed effort over the crossbar eight minutes before the half.

Meanwhile, it was a lonely 40 minutes for OJR keeper Zeb Smith, who played the ball a few times but was not called upon to make a save.

Boyertown’s chances to break the ice looked strong around the 50th minute, but consecutive opportunities from Willson and Dimitri Randjelovic sailed high and just wide about 90 seconds apart. Kurtz batted away Gavin Zorn’s blast in the 68th minute, but it was nothing compared to his spearing of Gawlik’s header just before time expired in regulation, probably the strongest chance for either side to that point.

“As soon as I turned, I regretted not going out for that ball,” admitted Kurtz. “But by that point, it made sense to stay on my line, and the ball came to me. Just good luck.”

“Give [Kurtz] credit — he made some strong saves,” admitted Wentzel.

OJR outshot Boyertown 10-8 for the game, with Kurtz forced to make seven saves as opposed to only one for OJR’s Smith.

Another clean sheet for Kurtz — Boyertown’s 10th of the season — underscored the strength of the team, its defense, which withstood the long periods of Wildcats-controlled play.

“We hope to sustain this through districts,” said Kurtz. “Defense and timely goals, that’s how we’ve gotten where we are.”

OJR fell to 11-6-2 on the campaign, but most importantly still on the right side of the bubble for qualification in Class 4A Districts, where they currently reside in 21st place. The district tournament accommodates 24 teams.

The Bears move onto Thursday with an opportunity to claim their first boys’ soccer title since 2015-2016, when they won in consecutive years, and their fifth trophy overall.

“We all [Boyertown and SF players] know each other from club soccer,” said Wenger. “We love playing them, and it’s always a really good game.”

“Whoever runs through the ball,” Willson concluded.