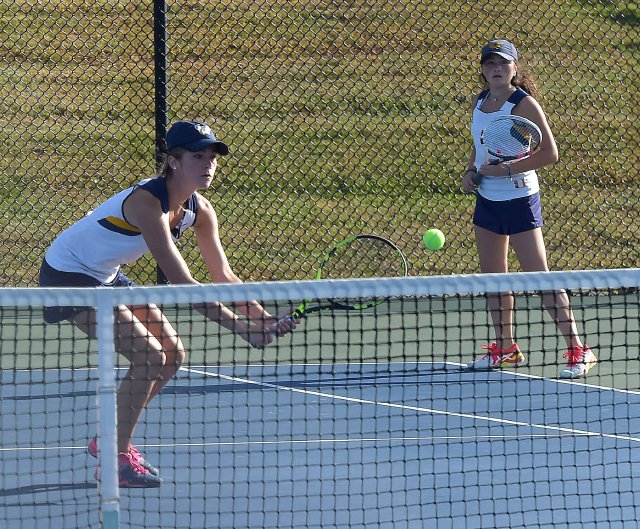 Uwchlan >> Shortly after Unionville captured the PIAA District 1 3A team title with a 3-2 win against Downingtown West in the district championship final Tuesday afternoon, Indians head coach Janet Johnston reflected on what made her squad a champion.
“Culture trumps a lot of things in this world, and our girls have developed a nice culture,” said Johnston. “They really love each other, work hard for each other. Our doubles partnerships have gelled nicely.”
Doubles play was a key to Unionville’s 3-2 win Tuesday, as the Indians swept the two doubles matches, winning each one in three sets after losing the first set.
When Unionville’s second doubles team of senior Josie Liu and freshman Catherine Stone prevailed, 3-6, 6-4, 6-1, it gave the Indians a 3-1 lead in the contest and clinched the district team title for Unionville (20-0), who was the top seed in the tournament.
Interestingly, when Unionville defeated D-West 5-2 on Sept. 5, doubles play was the key, as Unionville swept all four doubles matches.
Tuesday, Unionville prevailed at first singles when junior Leah Walter, who was celebrating her birthday, won in straight sets, 6-3, 6-3.
“The keys for me today were consistency and keeping the ball deep in the court with lots of spin,” said a smiling Walter. “I was also able to come into the net and make some nice drop shots.”
Unionville’s first doubles team of sophomore Faith Ilgner and freshman Jaclyn Santaguida bounced back from a loss in the first set to win, 4-6, 6-1, 6-3. Ilgner and Santaguida are currently 14-0 at first doubles.
“The key for us in the second and third sets was keeping it in play,” said Santaguida. “And Faith has a good putaway.”
Ilgner noted, “Jaclyn’s consistency was [important] to our victory.”
The clinching point for Unionville Tuesday came at second doubles, when Liu and Stone prevailed, 3-6, 6-4, 6-1. Since joining together as a doubles pair in mid-season, Liu and Stone are undefeated in doubles play.
“The key for us today was staying focused, staying together,” said Liu. “The first set, we felt a little bit off [form], and we were frustrated, not with each other, but with our own play. But Catherine is good at ground strokes, and sets me up well at the net. Our net play was good today.”
Unionville’s road to the district title began with a 5-0 win against No. 16 seed Academy Park in the first round; then a 4-0 victory against No. 9 seed Kennett; then a 3-1 win against fifth seed Harriton to advance to the finals against D-West.
Downingtown West (19-2), the No. 3 seed in the tournament, has only two losses this season, both to Unionville. The Whippets’ road to the district finals began with a 4-1 win against 14th seed Council Rock North in the first round of Districts; a 3-2 victory versus No. 6 seed Wissahickon 3-2 in the second round; and a 3-2 win against No. 2 seed Radnor in the district semifinal. In the district semifinal, the Whippets got straight set wins at second singles (Sophia Koons) and third singles (Lily Shi) and a three-set victory from the second doubles duo of Divya Kalmady and Lili Zeblum.
Tuesday, Downingtown West got off to a good start, winning the first set in four of the five matches.
“It hurts to come so close to the district title, especially when you consider what we accomplished just to get to the district final,” said D-West head coach Justin DePietropaolo. “When you lose players like Jordan Bradley and Holly Koons to graduation [last spring], to get here to the district final is an amazing accomplishment.”
The Whippets got straight set wins Tuesday at second singles (Sophia Koons) and third singles (Lily Shi).
Koons, who won her second singles match 6-3, 7-6 (7-4), credited her victory to first-serve proficiency and keeping the ball in play.
Shi, who won her third singles match 6-2, 6-3, said, “I tried to keep the ball in play, and waited [for a good moment] to attack.”
NOTES: Both Unionville and D-West will be playing in the first round of the PIAA Class AAA state team tournament Oct. 22 at the Legacy Youth Tennis and Education center in Philadelphia. The Indians’ match is scheduled for noon.
The district champion Unionville varsity squad includes 15 players – Leah Walter, Saanvi Garg, Meera Sehgal, Faith Ilgner, Jaclyn Santaguida, Josie Liu, Catherine Stone, Alex Narun, Sophie Walter, Mia Maccario, Mauria Blair, Caroline Koberg, Emilea Suplick, Ella Mangone and Elissa Stoops.