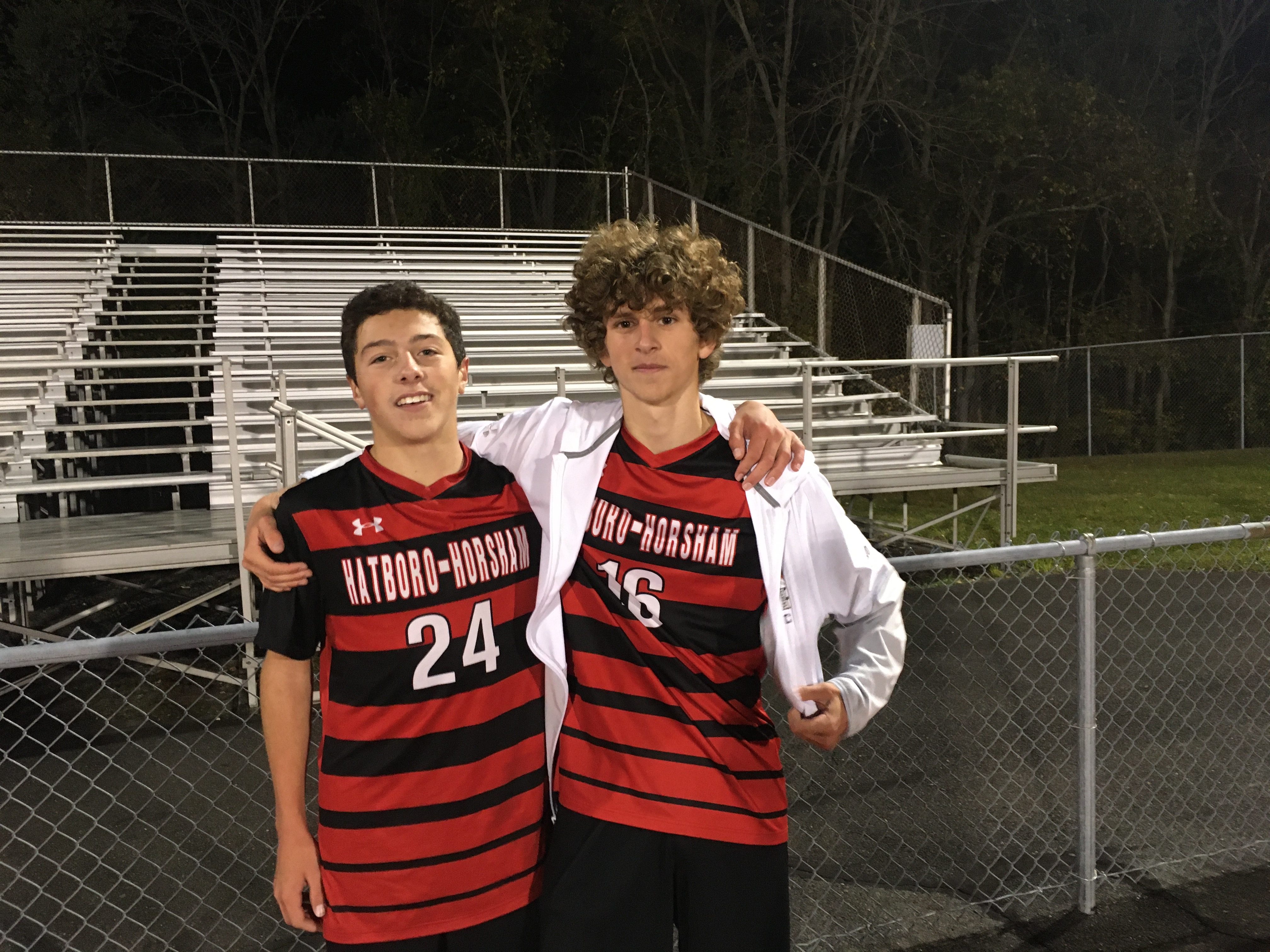 HORSHAM >> All Jake Freedman was really trying to do was keep possession for his team and play a dangerous ball back in front of goal.

The Hatboro-Horsham freshman had chased the ball to the corner, smartly running ahead of it and getting his hips turned all the way around before hitting a right-footed volley back toward the Abington net. For Freedman, the rest played out in slow-motion as his hit trailed back toward the crossbar, just dodged the hands of the leaping Abington keeper and dipped under the frame and in for an overtime winner.

Before he could even react, Freedman was engulfed by his team as the Hatters edged Abington 2-1 to claim a least a share of the SOL American title on Monday night.

“Honestly, time kind of froze at the end, I just put it up and didn’t know what was going on,” Freedman said. “Next thing I know, all of my teammates were coming in. It was just a great moment.”

The teams entered play with identical 13-2-1 records and also the same 10-1-1 marks in conference after playing to a 2-2 draw in their first meeting of the fall. Just to make it more obvious how close they were, Abington held the No. 7 spot in the District 1-4A rankings and Hatboro-Horsham the No. 8 prior to first tap.

Both squads have one fixture left on Thursday but any result other than a loss will hand the Hatters the outright SOL American title. It’s the second conference title in the last three seasons for the Hatters, who won an outright title in 2017 before Abington won last fall after moving over from the SOL National.

Under the lights Monday, the teams waged a high-intensity and physical but also clean game.

“It was a huge win,” Freedman said. “After what happened in the first game, we had them and they got a late free kick and we weren’t guarding them, tonight we were determined to get a win.”

Abington scored in the final 15 seconds in the first meeting to tie the game but a loss to Upper Dublin in the second half of conference play brought them into a tie with the Hatters atop the table.

The Hatters started the season 0-2 and haven’t loss since, the tie with Abington on Sept. 19 their only non-winning result since Sept. 4. After losing to Upper Dublin in the first game of conference play, Hatboro-Horsham has been on a mission and now stands one win away from making sure it is the only team etched in as this fall’s conference champion.

“We knew we had to win out to win the league, so we just had to get it done,” forward Nathan Scavo said. “We made sure we got shutouts and just put ourselves in good situations to win.”

Scavo jolted new life into the match when he opened the scoring 10 minutes into the second half. An Abington defender tried to head an aerial ball clear, but the header glanced backward and Scavo was on it.

The sophomore turned on his blistering pace, winning the race to the ball then burying his chance with confidence right into the middle of the netting.

Abington tied it up about four minutes later after the Hatters gave up a free kick in less-than-ideal real estate. Ghosts senior Nevin Baer delivered a good ball to the far post where holding midfielder Andrew Kulynin headed it home to knot the score.

While the Ghosts had a number of players go every minute and work hard, they owed special credit to senior keeper Sam Dumas. Starter Jalen Harris had to leave the match with 13:12 left in the first half after a collision making a save, bringing Dumas in cold.

The senior would make six stops, including a pair of brilliant saves about a minute apart in the second half to help the match go to overtime. On the first, Dumas pushed a missile by Jake Weiss over the bar then followed it with a sprawling one-handed denial of a Enrico Romano header off a corner.

“Sam did a heck of a job, he made two absolutely wonderful saves or else this game doesn’t even go into overtime,” Garber said. “It was a good game, Hatboro played hard and it was well-deserved by them.”

Garber noted the loss will likely knock his squad out of the top eight and the first round that comes with it but he was only worried about getting his team back on track to finish the season with neighborhood archrival Cheltenham on Thursday. The veteran coach felt his team was a little too direct on Monday and wasn’t able to connect like it normally can.

Asked what he thought made the difference Monday, Freedman quickly cited the Hatters’ fans, including a healthy student section that included the girls’ soccer team that made a lot of noise from the first touch on the ball. Once the madness calmed on the field but perhaps still wrapped up in the emotions of the moment, one of Freedman’s teammates issued a bold proclamation.

“Freedman doesn’t carry anything for the rest of his high school career,” one player yelled as they made their way off the field.

Hatboro-Horsham ends its regular season with a visit to Plymouth Whitemarsh on Thursday. Hatters coach Kyle McGrath knows his group has the mental focus to not lose focus after Monday’s win and said everyone down to the bench players who don’t see many minutes has been invested in pushing the team forward.

“We talked at the end of the game that if we want to win the league outright, we have to win Thursday so they understand what’s at stake,” McGrath said. “We’ll regroup Wednesday then get after it Thursday. It’s a huge game and hopefully it helps solidify us in the district rankings and get us a bye but our No. 1 goal going into the season was to win the league and we’re almost there.”