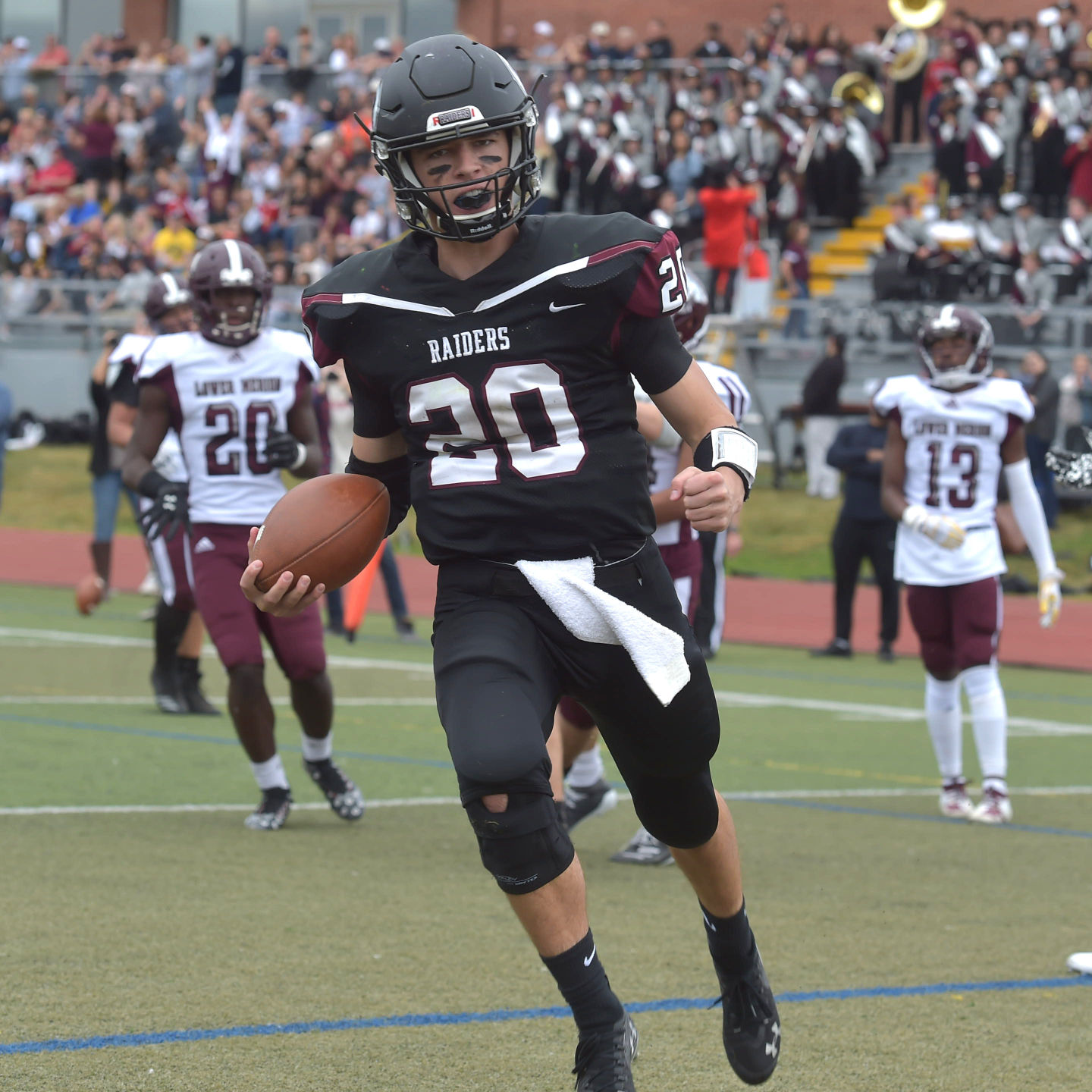 Radnor quarterback Sam Dilella celebrates as he waltzs in for a touchdown in the second quarter against Lower Merion Saturday. Radnor won the rivalry game, 49-6. (Pete Bannan/MediaNews Group)

With the host Raiders’ 49-6 victory at Prevost Field Saturday afternoon, both teams have 56 wins in the series, and 11 games have ended in ties.

Radnor’s Jahmir Dixon spins away from a Lower Merion defender to score in the first half for the Red Raiders. (Pete Bannan/MediaNews Group)

Dixon caught five of the eight passes DiLella completed, including scoring plays of 42 and 46 yards on his way to amassing 162 receiving yards. He added a 53-yard catch that left the ball three yards short of the goal line, setting up a TD run by Margolis.

DiLella (8-for-11 for 214 yards and three touchdowns through the air – all in the first half) also got off a pair of scoring runs in the second quarter.

Margolis gained 70 yards on eight carries. He also was all over the place from his inside linebacker post as Radnor did not allow a first down on the ground or through the air in the first three quarters.

Boujoukos and his line mates helped the Raiders earn 203 yards rushing and 280 passing for 483 yards of total offense.

Falcone was another of the inside linebackers whose strong play helped hold Lower Merion to 95 yards of total offense.

Lower Merion’s Sahor keep the visitors from being shut out with a 14-yard run 49 seconds before the game ended.

Dixon’s first scoring catch opened the scoring in the third minute of the game. His other six points came 29 seconds before halftime.

“This is a big game, and we came out ready to play today,” he said. “(DiLella) and I have been working together since the summer so that we can make our connections better. Whatever I did today was because there were people blocking for me, so our plays would succeed. They are the ones who should get the credit.”

Dixon pointed to Nick Hart, Duncan McDermott, Lincoln Twedt, Boujoukos, Peter Dustin, CJ Murphy, and Cameron Williams as unsung heroes who did their jobs as blockers so the quarterback and receivers had the time to make their plays go.

“It’s a team effort,” Boujoukos said. “I used to be one of the ones up in the stands watching this game, and now I’m playing in it. It’s been great having all the spirit as we got ready for the game all week.”

Margolis made several tackles for losses.

“I really couldn’t wait to get out there on the field,” he said.

Falcone will end up being a four-year starter before his Radnor career comes to a close.

“Margolis, Scott Belveal and Falcone played great,” Radnor coach Tom Ryan said. “And Austin Stanley and Phil Gatti also did a good job for our defense. I’m happy with the way we played.”

Lower Merion quarterback Jaden Holder did all that he could in the face of constant pressure from the Radnor defense. Sahor’s scoring run gave the LM fans something to cheer about late in the game.

“I’m really not a guy who looks at individual stats that much,” he said. “I just care about winning. I want to be the one celebrating all those touchdowns when they come to our field next year.”