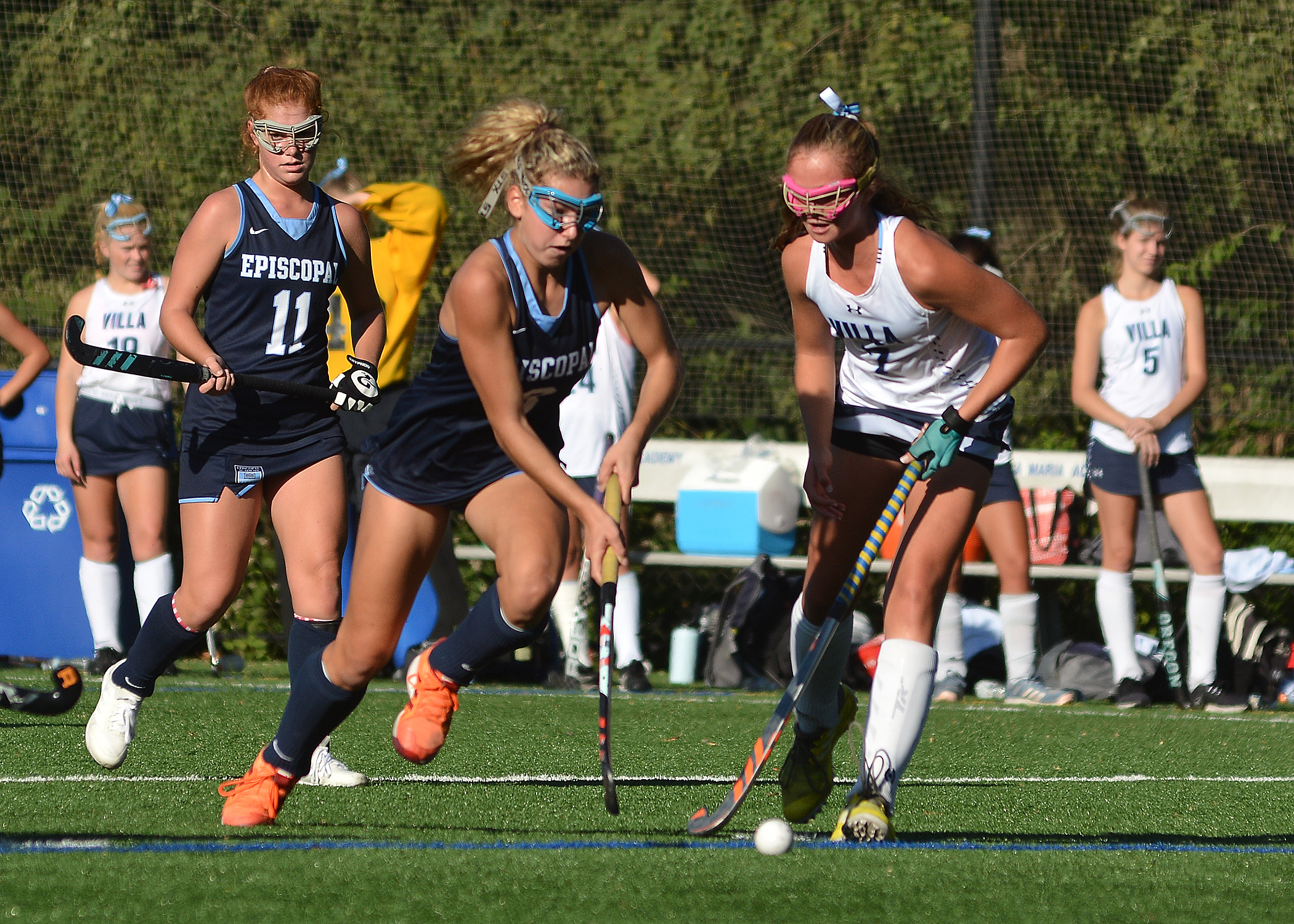 MALVERN—In the grand scheme of things, Thursday’s battle of two southeastern PA field hockey powerhouses, Episcopal Academy and Villa Maria, meant very little with respect to who won and who lost. Both teams will be moving on to their respective post-seasons, and both will carry expectations of a deep playoff run.

What the game did have to offer each team was a chance to line-up and play against one of the top teams in the area, with Episcopal ranked No. 6 in the state by MaxFieldHockey.com, and Villa coming in at No. 11. The two teams played a game that lived up to expectations, with Episcopal (10-1-1) jumping out to a fast start, then holding off a valiant Villa Maria (10-4) comeback bid to earn the 5-3 victory.

“Villa has an outstanding tradition of field hockey excellence,” said Episcopal coach Gina Buggy. “We’re fortunate to have that kind of competition available right here in our back yard, and I thought this was a really great high school field hockey game. This was a really nice win for us.”

Episcopal came out of the gate with its foot on the gas, and forced a penalty corner barely two minutes in. Mia Garber put the ball in play on the insert, sending it to Mary Szukics at the top of the circle. Szukics sent it towards the cage, where Kathleen Anderson finished it off for a 1-0 EA lead.

Though Episcopal didn’t let up—maintaining possession and forcing corners—Villa tightened up on defense and didn’t let anything further in the cage until just before the end of the half.

“We started out really slowly,” said Villa coach Katie Evans. “But I am really happy with the level of play, and we showed a lot of character in battling back in it. We simply weren’t prepared for Episcopal to come out that strong and we got caught on our heels.”

With just a little over two minutes to play in the period, Episcopal was awarded another corner. Garber once again took the insert, she then slid over to the post where she tipped a ball in for the easy score. It was the second of four times Episcopal converted a penalty corner in a game where they held a 19-5 advantage in corners.

The goal gave Episcopal a 2-0 lead at the break.

“It meant a lot to get out to an early lead,” said Garber. “There have been times this year when we’ve struggled to get going, but once we got the first goal today, we just carried that momentum. It’s always better to get out in front of a good team, rather than play from behind, and Villa is always a really tough team.”

The Hurricanes finally got on the board with a goal from Jacki Murray, but Episcopal answered right back with the first of two goals from Kelly Smith that made it 3-1, then 4-1. But there was still plenty of time on the clock, and Villa wasn’t about to just call it a day.

Still down 4-1 with the clock down under 14 minutes to play, Lindsey Roberts unleashed a bullet from the top right side of the circle to cut the lead in half, then made it a one-goal game less than a minute later on a goal that was a near photo copy of the previous one.

But despite relentless pressure, that would be the last gasp for Villa, while Episcopal tacked on a goal from Ashley Sessa with a minute left to round out the 5-3 score.

“The reason we schedule teams like EA are to get these kinds of games before the post season,” said Evans. “This is a young team, and it gives a chance to see where we are, and what we need to sharpen before we get to the playoffs and one loss can end your season.”