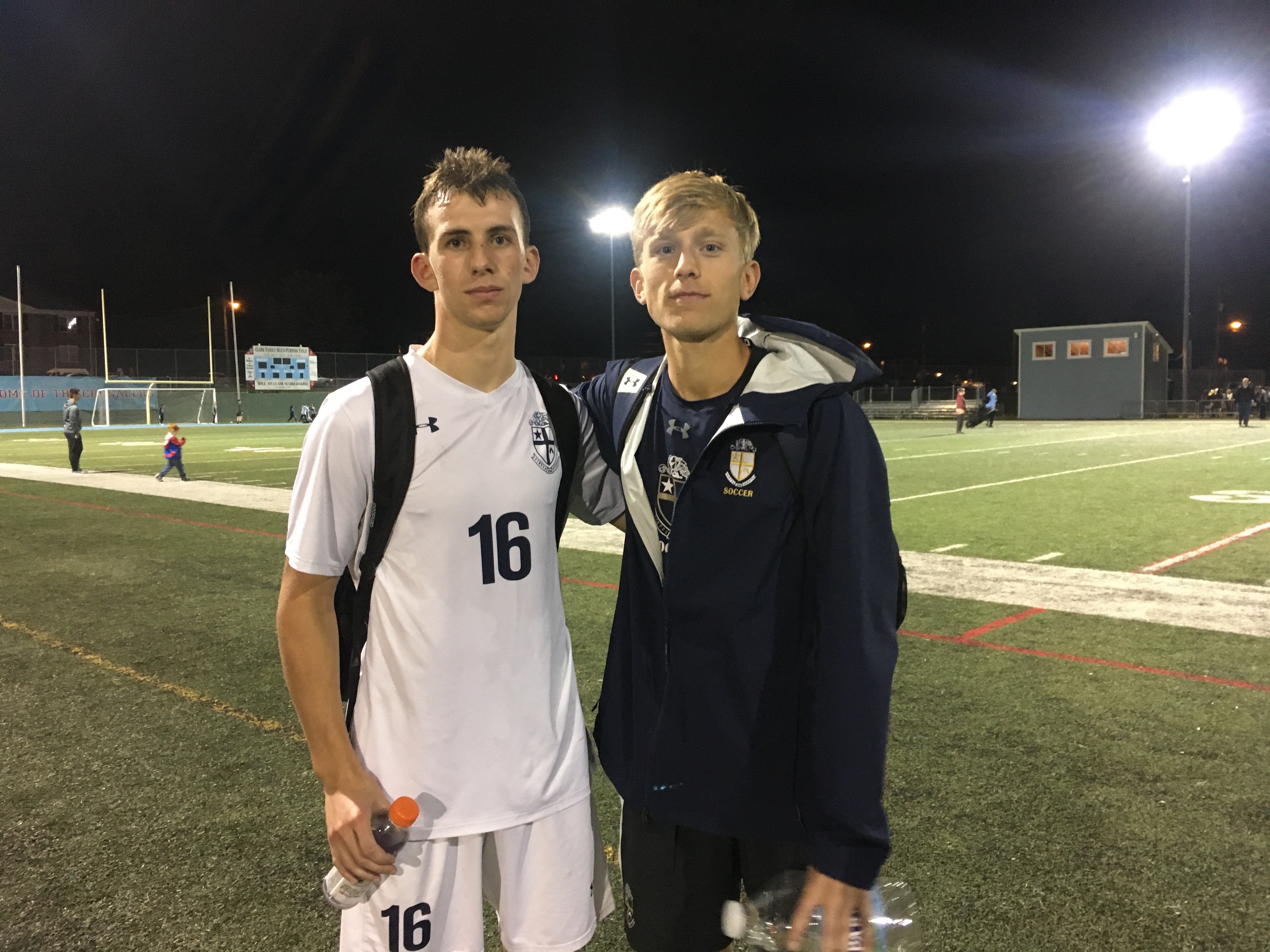 PHILADELPHIA >> One bounce of the ball was all that separated the top two sides in the Philadelphia Catholic League boys’ soccer table.

In many ways, La Salle and Father Judge are similar. Both are well-coached, both are stout defensively, solid in the midfield and have pace up top. So, it wasn’t a surprise that their matchup played out in 80 minutes of stalemate and came down to a single bounce.

It was a fortuitous bounce for La Salle, which led to a Sean Jennings penalty kick in overtime that lifted the Explorers to a 1-0 win on Tuesday at Ramp Playground, nudging La Salle ahead of Judge for the top spot in the PCL table.

“It was a great win for us, we really played great as a team,” Jennings, a sophomore midfielder, said. “Credit to Judge, they played a great game and pushed us. Now, we have to be on to the next one.”

BOYS SOCCER FINAL (OT): La Salle 1, Father Judge 0
Sean Jennings buries the PK a minute into OT after Judge called for handball in the box
Explorers take over first in PCL
Cruel end to an excellent game by Judge pic.twitter.com/Tz0hVxBARZ

Entering the night with identical 9-1 league records, a high-scoring contest didn’t seem likely. La Salle had conceded just seven times in PCL play while the Crusaders had been beaten for just eight goals.

Off the opening tap, the Explorers had the better of play, generating a couple corners and a few shots on target that were handled by Judge keeper Bobby Mulvenna. Judge’s back four and its pair of holding midfielders however were active from the start and they were able to withstand that surge and settle their team into the match.

Judge came on late in the half, getting a couple corners and engaging their front line with a couple dangerous runs forward.

“Between the 18s, I thought (La Salle) was terrific with what they were doing, so we asked one of our guys to hang back then we went with some speed on the flanks up top and you saw the opportunities we had,” Judge coach John Dunlop said. “We had four scorable goals and we didn’t take advantage of them. We tried to swing the possession a little bit and play our way and I thought we did that, but La Salle did it back to us. They’re big and strong and at times, we had some trouble with that.”

The Crusaders’ center back tandem of senior Brendan McCarthy and senior Jagger Latimer were a force defensively, throwing their bodies in the way of multiple shots and free kicks. They also got involved on offense, sending booming kicks up the pitch to get the forwards attacking.

That speed put a lot of pressure on La Salle midway through the second half and senior goalkeeper Jack Heineman had to come up with two superb saves to keep the game scoreless. Heineman, a first year varsity starter in goal, punched away a dart at the near post a couple minutes before palming an absolute howitzer from outside the box over the crossbar.

“We wanted to stop their long balls, they had a few kids who could knock them deep, so we wanted to cut that down as much as possible,” Heineman said. “The saves, it’s reaction really, you have to watch it and see where it’s going.”

Here's the second of those saves pic.twitter.com/uYIynMZWIN

Judge was still on the attack, keyed by Mike Martins, Tim Purcell and Tom Sweeney, who sent a shot agonizingly wide with 23 minutes left.

“At times, we were a little too direct and played right into it, but when you look at how well-coached and organized Father Judge always is and then have the guys who are committed to defend where they’re selling out all the time, it made everything that much more difficult for us,” La Salle coach Tom McCaffery said. “On the restarts, we had some chances we let go and they did a great job of then getting into the lanes.”

The Explorers have faced their share of challenges during the PCL season, so even being under pressure for spells in the second half and having shot after shot blocked by someone in a dark blue uniform, they kept pushing.

“It was something we saw earlier this year in the Roman game, then against Wood last Friday where they had to come back and it’s something these guys have, they’re never really out of it,” McCaffery said. “They found a way. It’s funny the way the ball bounces sometimes, tonight it’s a highly competitive game and fortunately for us, the ball bounces our way that one time.”

Judge's defending has been great. Here on a corner pic.twitter.com/mPoaSbpEdc

McCaffery also noted the goal Judge had called back for a foul in the box, something that he said would have changed the entire complexion of the match. As part of his postgame talk, the La Salle coach told his players there’s still another level for them to get to and as the postseason begins, every team they defeated earlier this fall, including Judge, is going to look to end their season.

At the same time, La Salle had some great looks. Taj Weems put a header just wide late in the second half, Brendan Curran and James Barton had some solid shots on net and James Crawford’s work helped generate some crosses and corner kicks.

“We’ve really been focused on playing as a team, working together and trying to win together,” Heineman said. “We’re just thinking about us and not anybody else. I feel like once we step on the field we have the same plan and the same mindset to beat whoever is in front of us.

“I was just a battle. We stayed in there, kept our composure and had a lot of heart.”

After surviving a Judge free kick on the edge of the box at the end of regulation, La Salle came started the extra session with aggression. The Explorers were able to push the ball down the flank, something that Judge defenders Claudio Ciocca, Martins and Kevin Comey made difficult all game, and win a corner.

The corner kick service led to that fortuitous bounce, with the ball pinging off the turf and into a Judge player’s hand, giving La Salle a penalty kick a minute into the session. Jennings, who converted a PK against Archbishop Wood last week, stepped up to the spot.

“This is my first year on varsity but I want to set a good standard for my team and I think I did that tonight,” Jennings said. “I think my teammates want me to be in that spot.”

Jennings drove the ball right down the middle, rippling the back of the net as he ran to the corner and his teammates swarmed around him.

“We do it all the time in practice, especially in October and watching what a lot of the guys bring to the table and the confidence they have in it is something that makes my life easier,” McCaffery said. “You could see the conversation between him and some of the other guys, he wanted the ball and he demanded it and when you have that type of confidence, you let it rip.”

La Salle will be at Archbishop Ryan on Friday night while Judge wraps up PCL play on the road against Archbishop Carroll. Both sides will get a bye into the PCL quarterfinals next Friday, something the Crusaders certainly need with a handful of injured players looking to heal up.

As the Judge players left Ramp on Tuesday, there was a sense they were taking a little extra motivation from the result into the postseason with them.

“After we lost to Wood 1-0, the guys changed things around and put something into the game and we went on a streak playing some great teams,” Dunlop said. “We played a very good team tonight and hopefully we can look at this loss in a positive way and get something out of it.”