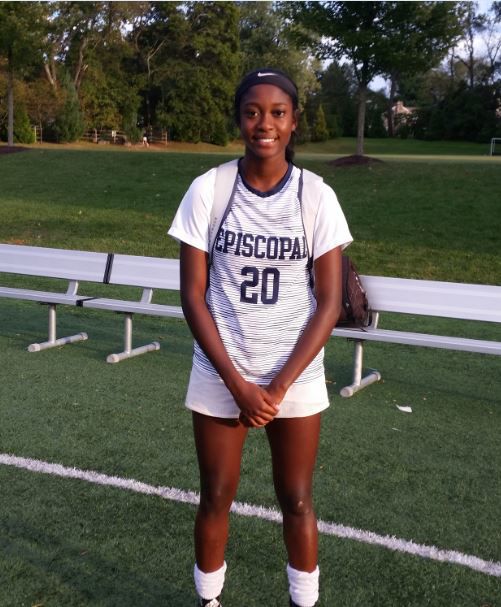 RADNOR — Episcopal Academy’s Laila Payton wasn’t specifically assigned to mark Agnes Irwin forward Natalie Pansini Tuesday afternoon at Phelps Field, but the senior center back made sure she knew where the Owls’ leading scorer was at every moment.

Payton did not have to be told that an EA victory hinged on keeping Pansini in check so anywhere Pansini went Payton was there, either right behind her or close enough to keep Pansini from making any kind of offensive move.

“Before the game, I try to see who their target player is and I just try to shut them down as much as possible,” said Payton, who will play college soccer at Old Dominion. “And I think our entire team did that today.”

It proved to be a winning strategy as the Churchwomen used an early goal from Lauren Cunningham and a solid defensive effort led by Payton, fellow senior Devon Whitaker and junior Allison Wilchusky to post a 1-0 Inter-Ac League girls soccer victory over the Owls Tuesday.

“Laila was the best player on the field today,” Agnes Irwin coach Mike Welsh said. “Every attack she broke it down. And I was worried that Lauren (Cunningham) would be the difference and she scored a really good goal so it was both ends of the field. We couldn’t get past their center back and one player scoring a really good goal.”

EA’s defense limited Agnes Irwin to two shots on goal, which Allie Bush handled easily, and made Cunningham’s tough-angle goal with 25:05 to play in the first half stand up for the winner to help the Churchwomen (4-5-0, 3-3-0) get to .500 in league play. The Owls’s best scoring opportunity came in the 76th minute when Alyssa Hardin tracked down a nice flick from Pansini, but Payton raced over to keep Hardin from getting a shot on goal.

While Payton anchored the defense, Cunningham put her versatility on display. She started the game on the wing, moved to the midfield, went up top to striker for a bit and then back to the midfield for the remainder of the game.

Playing multiple positions is not unusual for Cunningham, who has committed to play at Lafayette. She played center forward as a sophomore, moved to center back as a junior when Payton got hurt last season and wound up earning All-Delco honors on defense. She plays outside back for her club team, Penn Fusion.

“She has such a high soccer IQ that I think she can play anywhere at the next level in college,” EA coach Andy Fraggos said. “She could see herself on the back line, in the midfield or up top at Lafayette so that’s an exciting thing for her. She has a lot of versatility.”

“Playing multiple positions allows me to help out on the field wherever we need it,” Cunningham said. “So I do enjoy playing multiple positions. In high school, I have more of an attacking role, especially since one of our players (Raina Kuzemka) got injured (with a torn left ACL). I see myself in the 8 or the 10 (in college) because I can get up and score goals, but also get back on defense.”

Cunningham handled both chores with aplomb against the Owls (8-5-1, 2-4-0), especially on the winning goal. She took a pass from Bella Piselli on the right wing, turned and found herself at a difficult angle. Cunningham hesitated for a millisecond before she let fly a shot that found the back corner of the next.

She was as surprised as anyone at the result.

“I didn’t think I had the angle for it,” Cunningham said. “I just ripped it and it went in.”

That goal and defensive effort gave the Churchwomen a much-needed win going into the stretch run of the season. They’re hoping to put together the same kind of run they went on last season to win a PAISAA title. EA went 9-2-2 in its final 13 regular-season games and then won three straight in the PAISAA tournament.

“Last year we didn’t win the Inter-Ac, but wound up winning PAISAA,” Payton said. “I think we can do the same this year.”

Cardinal O’Hara 2, Upper Darby 0 >> Julia Stellabotte found the back of the net twice for the Lions and Rachel Bonfini recorded four saves to post the shutout.

Moira Penot had a strong game in goal for the Royals.

Garnet Valley 1, Methacton 0 >> Alyssa Wert tallied the winner 18 minutes into the second half. Caroline Amen and Mia Zebley preserved Kayleigh Saboja’s shutout with a late clearance off the line.