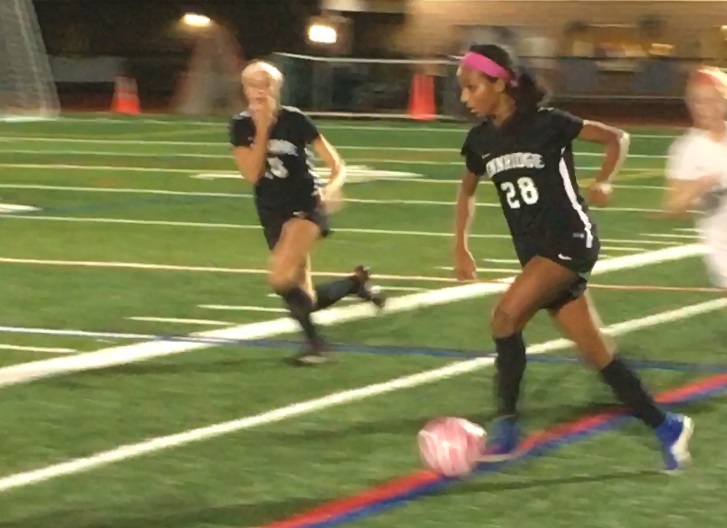 EAST ROCKHILL >> Leah Malone really wanted to win Monday night’s game, but not for herself.

The sophomore forward was part of a pregame ceremony to honor her five senior teammates, players who have guided her and made her as much a part of the Pennridge girls soccer team as they are. So with the final seconds winding down in overtime against Central Bucks South, Malone found a way to pay them back.

A wonder goal off the forward’s foot with three seconds left in the first overtime lifted the Rams to a 1-0 win over the Titans in a superbly played match at Helman Field that also handed Pennridge the SOL Continental.

“I looked at the clock and I knew it was running low,” Malone said. “This game, it was for the Continental championship and it was our Senior Night, so I was thinking ‘I really want to get this game over for the seniors.’ What a good way to win it on their Senior Night and clinch the championship, so I had the tiniest bit of space and with the clock so low, I just risked it.”

For whatever reason, almost every time the Titans visit Pennridge, the two churn out a stellar game. South, which got off to a slow start this season, came in winners of three straight and making a district playoff push. Were it not for a pair of heroic efforts by one of the Rams seniors, South easily could have swiped another win in regulation.

Pennridge keeper Meghan Kriney made two remarkable saves, one in each half, to deny what looked like sure-thing goals for CB South. In the first half, a free kick by Lauren Spear led to a mis-touch in the box that Elizabeth Chiliberti pounced on and sent toward goal.

Kriney dove to her right, stopping the ball with one hand, then diving atop the rebound before South’s Sophia Kane could get there.

“Those are always the hardest saves because you think about and think back almost like ‘honestly, how did I do that and in that situation again, would I be able to do it,’” Kriney said. “That’s one of the hardest things about being a goalkeeper, especially being able to live that moment, it makes every save count and that much more special.”

Kane forced the other save in the opening minutes of the second half. Ally Cutter supplied a great through ball to put the senior forward in. Kriney surged off the line, blocking Kane’s shot with defender Ashley Gordon hitting the rebound clear before Kane could try a follow-up.

After every game, Rams coach Audrey Anderson asks her team what lessons they learned that match. Monday, taken to extra time for the first time this season, the Rams had plenty to take home with them.

“Anything can happen,” Kriney said. “We went into this game after we beat CB South 3-0 before and maybe not thinking of it and tonight they’re playing us as best they can, it turned out to be a great game and we found the energy to put it away at the end.”

“We learned we can push through anything, we haven’t been tested like this,” Malone said. “This was the first time we went into overtime and we learned a lot being able to come through with the win.”

South’s effort was fantastic from start to finish. Senior keeper Shannon Snyder made four tough saves and the back line of Spear, Lauren Ewell, Bridget Curtis and Maddie Tantum didn’t give the Rams forwards much room to work off each other.

Pennridge’s midfield play has been the difference in many matches this fall but the Titans midfield of Lauren Farrell, Janessa Watson and Chiliberti matched that effort and made anything in the center of the pitch a battle. It was an effort that on any other night would have snared at least a point, if not more, but South has proven a resilient group this season.

“I couldn’t be prouder of the girls,” South coach Betsy Bullock said. “It was a fantastic shot at the end that nobody could stop but it was pretty equal and at times, we had the better of the play. This is what I told them; if we continue to play like that, we will be in the playoffs. We need to continue to do that going forward because we are good and can be very, very good.”

While the total number of shots on goal didn’t even reach double-digits, it was the type of match where the effort just emanated from the field. It was defenders like Spear or Pennridge’s Maddie Angelo making a smart tackle and clear or midfielders like Rams senior Chance Hendricks or Watson fighting for that half-inch of turf that made the difference on a 50/50 challenge.

It’s a game Pennridge has played several times this season and will no doubt see more of with five games left in the regular season before districts.

“I do really enjoy this team’s determination ,” Anderson said. “This game didn’t make or break our season but our seniors did want to win this game tonight so for them to go out their senior year and have that goal achieved, it’s pretty amazing for them.”

Kriney, who split time between forward and goal last season, got a glimpse of what four straight conference titles looked like last spring and wanted that experience for herself and classmates Hendricks, Maddie Anderson, Lauren McIntyre and Rachel Dudek.

“To have that fourth one, it’s insane,” Kriney said. “I run track, so I remember watching the boys senior class go four in a row last year which was really coot, so to have that moment for us, it’s something unbelievable.”

Another big save for Meghan Kriney, this on Sophia Kane pic.twitter.com/AgaIe2EZzQ

Malone’s finisher reminded her of last year, when as a freshman, she came off the bench to score a late equalizer and then an overtime winner in a District I playoff game against Abington.

“It’s so weird how people can pull through in situations that are so tough and against the odds,” Malone said. “Ultimately, those times are the ones that count the most and it’s important to be able to capitalize on them.”

The game-winner followed a sequence off a McIntyre throw-in. After the throw bounced, a South player tried to hit it away, but Malone was able to win a 50/50 on the left side. Taking a quick, small touch, she unleashed a right-footed arc of a shot that found its way home.

“This whole team has a genuine love for each other and we know we’re doing it for our teammates, not just for ourselves,” Malone said. “Tonight, I didn’t want it for myself, I wanted it for these guys, the seniors, because I knew how cool it would be for those guys and just as a team, it’s cool to win that way and get to 13-0. I want to put them first after all they’ve been through.”