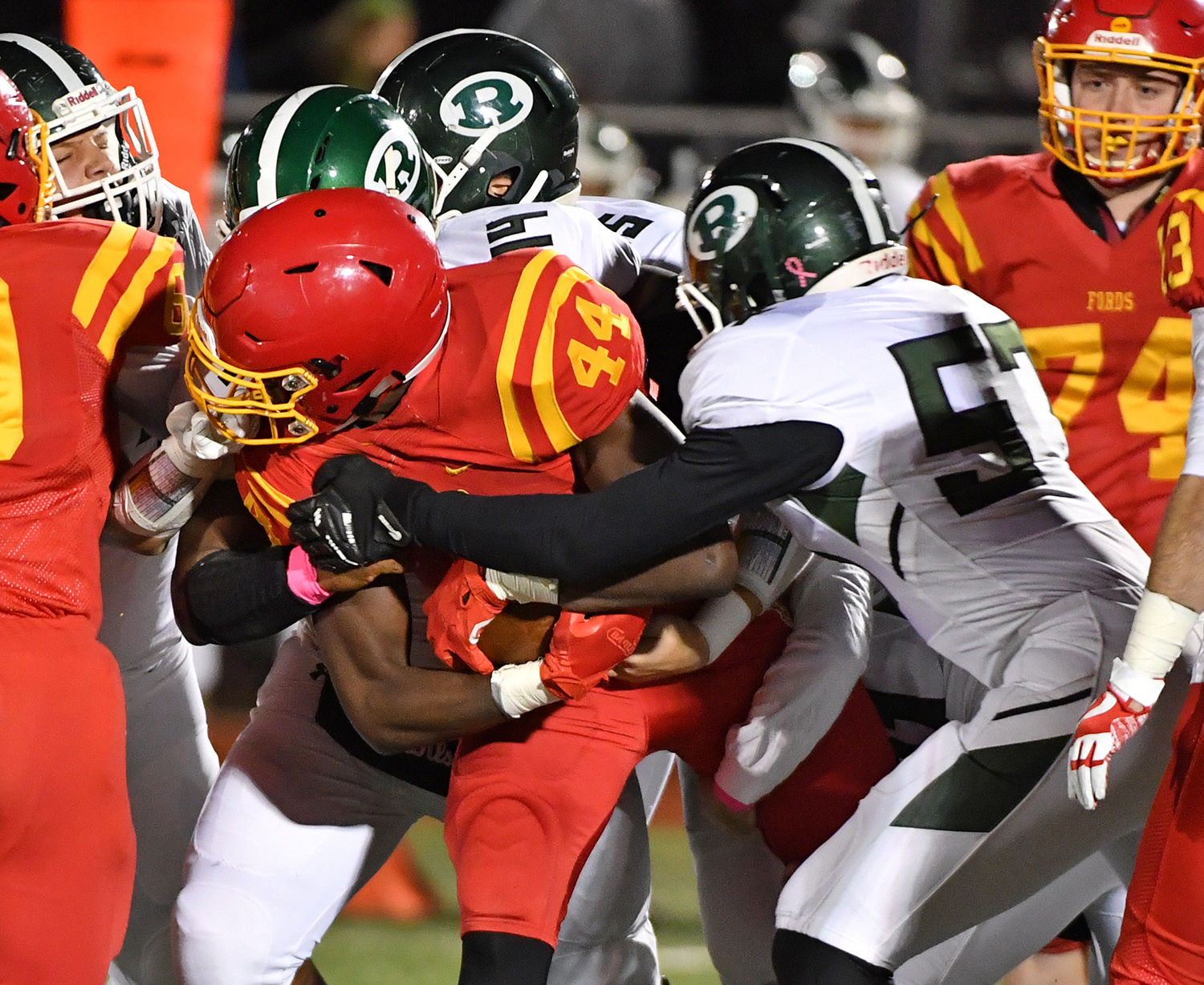 Ridley defensive end Tahmir Wilmore, right, seen in a game trying to stop Haverford running back Chasen Wint last season, returned from a dislocated shoulder and played through the sadness of losing his grandmother Friday with 5.5 sacks to lead Ridley to a 35-21 win over Marple Newtown. (Times File)

MARPLE — Tahmir Wilmore could have waited another week to come back, and no one would questioned his decision.

The Ridley senior defensive lineman had missed four games after dislocating his shoulder against Springfield. He rehabbed hard. He had the game against Marple Newtown circled on the calendar. That big game between Central League is the one he wanted to get back for.

Then, tragedy struck on game day, as Wilmore learned that his grandmother had passed away Friday morning.

Wiping tears from his eyes before the game, Wilmore decided he was going to play and dedicate his performance in her memory. After his first sack, he pointed to the sky in tribute.

By the end of the night, he would do that 10 more times.

Wilmore finished with 5.5 sacks and four solo tackles, single-handedly blowing up the Marple Newtown offense as the Green Raiders came from behind to pull off a spirited 35-21 victory at Primos Hoagies Stadium.

Despite the Tigers scoring three touchdowns, Ridley’s defense limited them to just 27 total yards of offense in the second half, and Wilmore was playing on another level.

“I just had to play that way for her,” he said of his grandmother. “I wanted to play my best game for her.”

He couldn’t have been better. He and his mates had Marple quarterback Joe Paoletti running for his life all night. Paoletti was brought down behind the line of scrimmage eight times and was forced to get rid of the ball early a handful of others.

“He makes a difference for us, no question,” Ridley coach Dave Wood said of Wilmore. “When you have a guy who can get after the quarterback like he does, it allows us to do some other things behind him and we were really able to execute tonight.”

Ridley (6-1, 5-1) picked off Paoletti twice, including a 29-yard interception return for a touchdown by Gavin Kingsborough in the third quarter that put the Raiders ahead to stay.

“You see them playing the way they were playing tonight, and it just pumps you up on the sideline,” said Ridley quarterback Jack Grace, who could have also garnered headlines for his effort, with 177 yards rushing and two touchdowns on just 14 carries. “I know it’s usually the offense does their thing and the defense does their thing, but in a game like tonight, you just can’t help but feed off each other, and I think we did just that.”

Grace neglected to mention special teams, which got the ball rolling for Ridley on the opening kickoff as Sonny Elhamamy, who would later add an interception, returned the boot 95 yards to put Ridley on top 7-0 before everyone had a chance to settle into the bleachers.

That started a wild stretch of seven minutes where Ridley and Marple Newtown (5-2, 4-2) traded haymakers.

The Tigers answered with a 63-yard touchdown run by Charlie Box, and then after a forced fumble, took the lead when Box plunged into the end zone from two yards out.

But just 54 seconds later, Grace scampered 56 yards for the first of his touchdowns, tying the score at 14-14 less than seven minutes in.

From there things settled down through halftime, but the explosive burst resumed after halftime.

Johnnie Ebert scooped up a Grace fumble and rumbled 35 yards to get the Tigers into the red zone. Ridley’s defense stopped Marple three times on the 1-yard line, but then the Tigers ran a trick play and successfully completed a halfback pass from Box to Shane Benedict on fourth down to regain the lead.

Dylan Staley, who had a nice night running the football with 80 yards on 15 carries, answered with a 24-yard reception and a 14-yard touchdown run on successive plays to again tie the score, before Kingsborough’s interception put Ridley ahead.

Grace added one more score, a 25-yard jaunt, that iced the game in the closing minutes.

“Give Ridley a lot of credit for the way they played,” said Marple Newtown coach Chris Gicking after his Tigers lost their second straight game after winning their first five. “They were able to execute the plays they needed to execute, especially in the second half and we missed out on some of our opportunities. We need to have a better week of practice and bounce back from this, and we will.”

Spring-Ford turns it on in 2nd half, tears by Boyertown 55-20
Penncrest battles, but no match for powerhouse Garnet Valley ground game