Banged up Carroll no match for Johnson, Neumann-Goretti 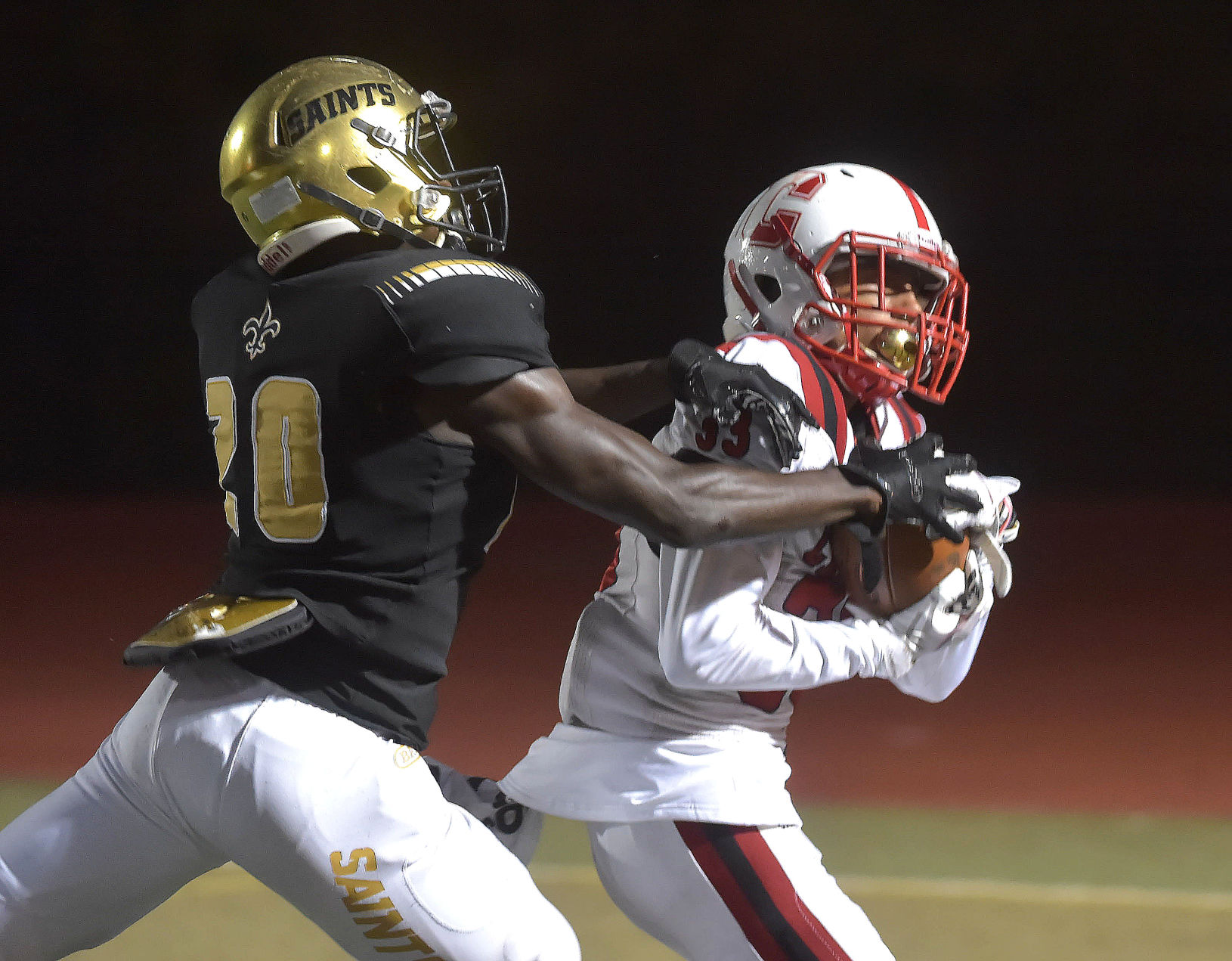 Archbishop Carroll's Malachi Hansen, right, hauls in a pass for a touchdown from Richie Kimmel late in the second quarter as Neumann -Goretti's Naseem Bailey covers. The Saints would go on to score 30 unanswered points in the second half on the way to a 64-20 win. (PETE BANNAN/MEDIANEWS GROUP)

PHILADELPHIA — Archbishop Carroll’s chances at victory were not great Saturday night at the South Philadelphia Supersite.

Several starting players, including star quarterback Russell Minor-Shaw, did not dress. Minor-Shaw suffered an ankle injury in a win over Conwell-Egan a week ago. The senior entered this weekend with the third-most passing yards (1,009) and second-most rushing yards (561) in Delaware County.

While the Patriots showed plenty of grit in the first half, Neumann-Goretti was far too talented to compete with for four quarters. The Saints tallied 30 unanswered points in the second half en route to a 64-20 win.

The Saints (7-0, 4-0) gained sole possession of first place in the Catholic League Blue Division. The Patriots (4-3, 3-1) will look to bounce back next week when Bonner & Prendergast comes to Radnor.

“We came out and executed in the first half and we knew we needed guys to step up,” said Richie Kimmel, the Patriots’ spectacular senior co-captain and All-Delco linebacker. “We were missing Russell, which was big, and we had other guys out with injuries. But we had guys step up and we kept battling. We gave it a great effort and never gave up.”

The Saints amassed 569 yards of total offense, spearheaded by electrifying junior running back Tysheem Johnson, who ran for 151 yards on 15 carries with two touchdowns. He had six catches for 149 yards and a score. And, for good measure, he threw a 30-yard touchdown pass to Damian Gabriel in the third quarter.

In his opinion, Johnson had to be better against Carroll, a self-critique that is difficult to comprehend when you consider he had rushed for 759 yards and 11 touchdowns prior to Saturday’s incredible performance.

“The last couple games, I got two or three touchdowns, but I felt like I wasn’t playing that good,” Johnson said. “To get six touchdowns tonight, that felt really good. I set myself to a higher standard and I know I got to be great.”

Having the opportunity to throw the ball was an added bonus for Johnson and the Saints.

“The defense is expecting that I’m going to run the ball every time, so when I do throw it, they never expect it or see it coming,” he said.

Neumann-Goretti quarterback Marqui Adams went 12 of 16 for 186 yards and two scores, including an 87-yard bomb to Johnson late in the second quarter. Johnson lined up out wide and ran a simple post route down the Saints sideline. Adams hit him in stride about 20 yards up field. Once he accelerated, there was no flagging him down.

“We know we can score against anyone, no matter when,” he said.

The Saints and Patriots combined for 42 points in the second period. The final four touchdowns transpired in a span of one minute, 36 seconds. Carroll junior Malachi Hansen gave the injury-plagued Patriots a boost. Kimmel threw a fullback pass to Hansen 32 yards for a touchdown and, after Johnson’s 87-yard touchdown, Hansen returned a kick 70 yards to the house to pull the Patriots back within seven points.. A late touchdown pass from Adams to Jaris Jefferson gave the Saints a 34-20 advantage at the half.

Nick Lamey filled in for Minor-Shaw at quarterback in addition to playing defensive back and punter. The 5-11, 160-pound junior was 5-for-9 for 66 yards. Nate Gould also received time under center for the Patriots, who couldn’t prevent the Saints’ blitz-heavy defensive front to rack up eight sacks on the night.

“Goretti did a great job of taking advantage of some certain situations, they have tremendous team speed and it’s not a level of speed that you can prepare for. Until you see it live, you’re not really sure just how fast they are,” Carroll coach Kyle Detweiler said. “We said at halftime, there’s some holes in the boat but we feel like we can patch them up and keep this thing afloat, but unfortunately we went the other direction. The holes ripped wide open and that boat sank in a hurry. When you play really good teams, they show you where you’ve got to get better at in a hurry.”