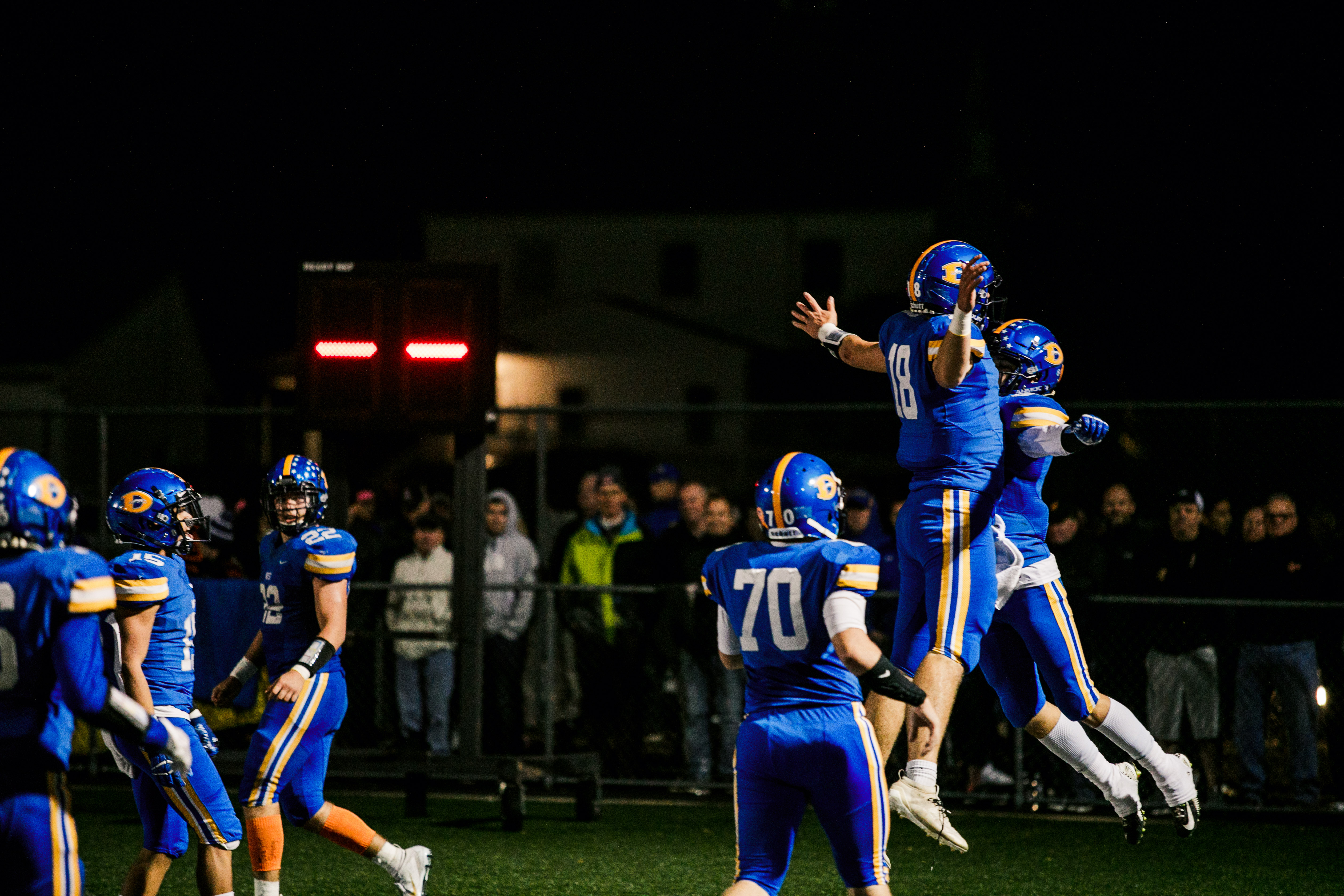 DOWNINGTOWN — Downingtown West turned the ball over four times, gave up 35 points and 407 yards against Downingtown East… and won by four touchdowns.

After a rocky start, the Whippets’ star power was on full display as five different players found the end zone in the highest-scoring episode of the Battle of the Brandywine. West earned its first back-to-back win in this series since 2009, and the Whippets moved to 7-0 with a 63-35 win at Kottmeyer Stadium, Friday.

“This is all I wanted all year long,” West’s star end Sean Pelkisson said. “This is what we waited for.”

As resilient as East (1-1 National, 6-1 overall) was, West (2-0, 7-0) was all the more opportune. The Whippets scored three non-offensive touchdowns — a kick and punt return by Julian Williams and a scoop and score from Pelkisson — to break the Cougars’ backs.

“They were crushing,” East coach Mike Matta said. “Twenty-one points makes a difference. That’s part of the game. I’m the special teams coordinator so there’s no one to blame but myself.”

If specials hurt the Cougars late, they were the spark, early. West fumbled away the opening kickoff and East scored on its first two drives on runs by Stanley Bryant and Spencer Uggla. West responded both times with touchdown by Tyriq Lewis.

After Cougars racked up 110 yards and 14 points on their first two drives, West found a way to match their intensity and the next eight drives spanning the second and third quarters netted just 132 yards and seven points.

Downingtown West’s Sean Pelkisson heads to the end zone after scooping up a fumble he forced in the fourth quarter. (Nate Heckenberger – For MediaNews Group)

“We didn’t change anything,” West coach Mike Milano said of the defense. “I think the emotional rush wore off a little and we just played. (East) is a big, physical football team.”

While the defense held the fort, West’s offense found a spark before half on Lewis’ third TD of the night, giving the Whippets a 21-14 lead at the break.

West scored four times in the third quarter, twice on passes from Will Howard to Alex Rosano and Lewis, and twice on Williams’ electric returns.

“Most of the time I go in hoping special teams don’t have a negative effect, and when you get a score, 99 times out of 100 you’re gonna win,” Milano said. “To get two is unbelievable.”

Stanely Bryant had his breakout game for the Cougars, with 126 yards and four TDs, while Uggla led all carriers with 153 yards. Bryant’s second score of the night went for 51 yards moments after West took it’s first two-TD lead, but Williams’ 93-yard return on the ensuing kick stole all the momentum back.

Downingtown East’s Stanley Bryant breaks away for a 51-yard touchdown in the third quarter. (Nate Heckenberger – For MediaNews Group)

“You could tell by the vibe, they didn’t want to be here anymore,” Pelkisson said.

On the biggest game of the year, to date, the stars showed up for West. Howard threw for 269 yards and three TDs, all while leading the Whippets with 83 yards rushing, Rosano hauled in five receptions for 119 yards, and Lewis totaled 112 yards of offense and four scores.

“Every year, growing up watching this game, I was chomping at the bit to play this game,” Howard said. “Getting the win, there’s no other feeling in the world like this. This atmosphere is unmatched and it’s so much fun with my brothers, getting the win.”

Pelkisson’s sack and strip and scoop and score in the fourth put the final nail in East’s coffin.

Downingtown West’s Will Howard picks up a first down in the third quarter. Howard led the Whippets with 83 rushing yards. (Nate Heckenberger – For MediaNews Group)

“They did a great job and they were well-prepared,” Matta said. “(Pelkisson) and (Hale) are really good football players and of course (Howard) is good. Ironically we were really worried about (Lewis) and he didn’t have as great a game as the others. They did a great job, but I’m proud of the way we fought.”

West will travel to West Chester East next to face a 6-1 Vikings team that just rolled over previously unbeaten Kennett, with Coatesville waiting in week nine. The steam of a huge win will soon have to be whisked away, but surely the Whippets will spend their Saturday relishing this one.

“It always feels good,” Milano said. To me, this is the best rivalry I’ve ever been involved in. To win this game, it’s always special.”

Downingtown East’s James Basilli comes down with the first of two interceptions against Downingtown West. (Nate Heckenberger – For MediaNews Group)