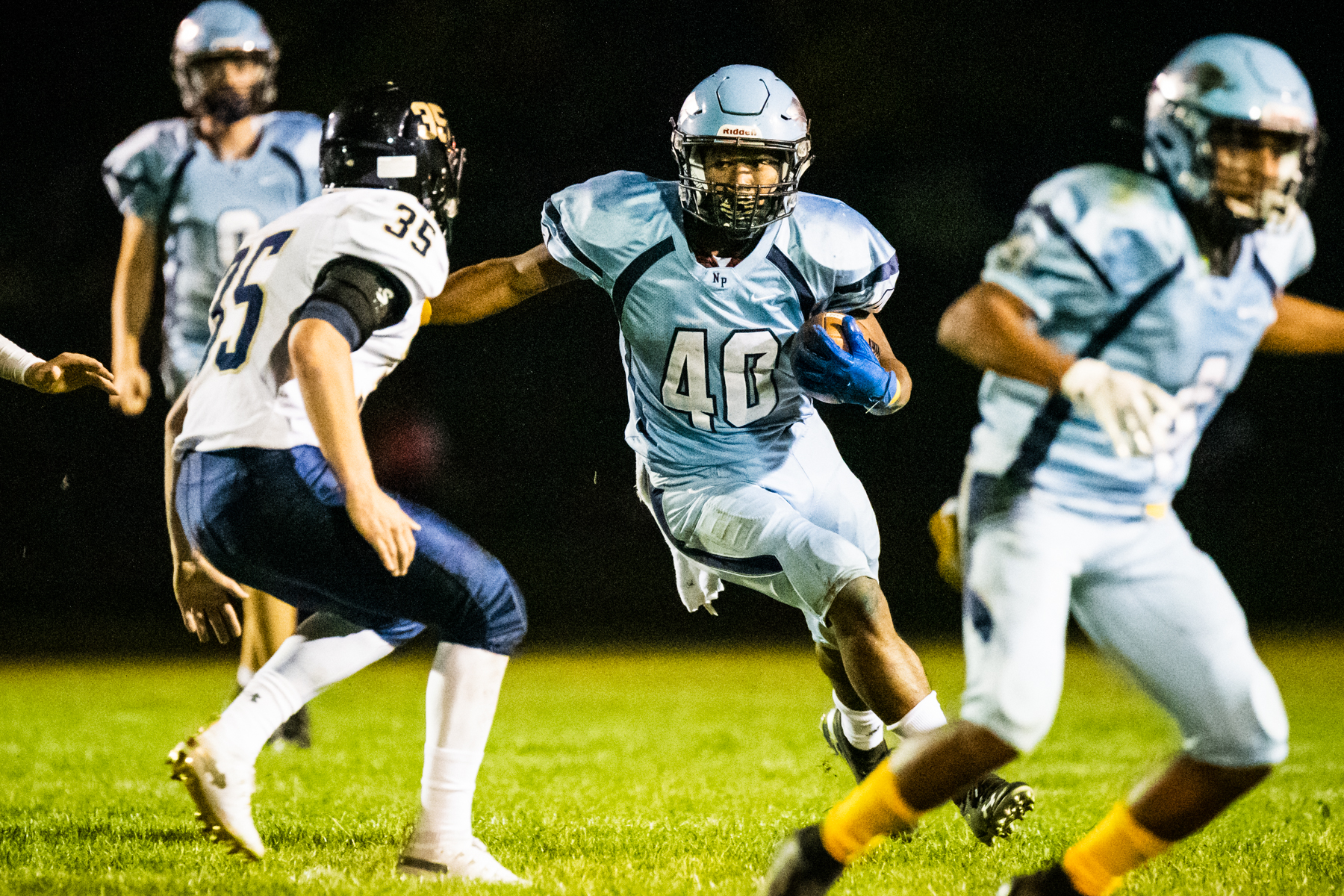 Two conference unbeatens will do battle in Week Seven of the high school football season, as Souderton Area travels to North Penn Friday night for a Suburban One League Continental Conference clash.

The Knights come into this one having won four straight, bringing a 5-1 overall record to Crawford Stadium with a perfect 3-0 mark in the conference.

Big Red is undefeated at 6-0, with a matching 3-0 mark in the conference.

The Knights dominated last week, rolling to a 36-0 shutout win over Council Rock South. Souderton, meanwhile, tangled with a tough Central Bucks East team and pushed to a 38-24 victory over the Patriots.

The winner of this contest stays on pace with Central Bucks West, which takes a 6-0 mark (3-0 conference) into its battle with arch rival CB East on Friday.

R.J. Macnamara continues to be a tremendous two-way player for the Knights, helping out on both defense and in the running game as well as the receiving game on offense.

Nick Guthre is a hard-charging back for Big Red, helping to power their Wing-T.

Big Red is searching for its first win over North Penn since 1989.

The following is a game-by-game preview of the area for Week Seven.

Archbishop Ryan at Archbishop Wood
Time/Place: Saturday, 7 p.m., at William Tennent.
Records: Wood is 3-2 overall and 0-1 in the PCL Red. Ryan is 1-4 overall and 0-1 in the PCL Red.
Last Week: The Vikings fell 20-6 to Roman Catholic. Ryan lost 24-10 to Father Judge.
Players to Watch: Cardel Pigford has tremendous breakaway speed in the ground game for Wood. Justin Collier is a nice two-way player for Ryan.
Prediction: Archbishop Wood 22, Archbishop Ryan 10.

Souderton at North Penn
Time/Place: Friday, 7 p.m., at North Penn.
On the Air: The game will be broadcast live on WNPV, 1440 AM and 98.5 FM.
On Twitter: @mpcabrey.
Records: Big Red is 6-0 overall and 3-0 in the SOL Continental. The Knights are 5-1 overall and 3-0 in the SOL Continental.
Last Week: Souderton beat CB East 38-24. North Penn blanked Council Rock South 36-0.
Players to Watch: R.J. Macnamara helps lead the NP defense. Nick Guthre is a tough runner for Big Red.
Prediction: North Penn 28, Souderton 21.

Central Bucks East at Central Bucks West
Time/Place: Friday, 7 p.m., at CB West.
Records: The Bucks are 6-0 overall and 3-0 in the SOL Continental. The Patriots are 3-3 overall and 0-2 in the SOL Continental.
Last Week: West had its third shutout, blanking Pennridge 35-0. East lost to Souderton 38-24.
Players to Watch: Jack Fallon has been a roll running the ball for West. Will Silverman is a good target at wideout for East.
Prediction: CB West 31, CB East 23.

Owen J. Roberts at Norristown
Time/Place: Friday, 7 p.m., at Norristown.
On Twitter: @emor09.
Records: OJR is 5-1 overall and 1-1 in the PAC Liberty. Norristown is 0-6 overall and 0-2 in the PAC Liberty.
Last Week: The Wildcats rolled, 35-3 over Boyertown. The Eagles 28-0 to Perk Valley.
Players to Watch: Connor Leister can get deep for OJR. The Eagles like to hand the ball to Isiah Tucker and let him pick up key yards.
Prediction: Owen J. Roberts 35, Norristown 21.

Germantown Academy at Hatboro-Horsham
Time/Place: Friday, 7 p.m., at Hatboro-Horsham.
Records: GA is 4-0 overall and 0-0 in the InterAC. Hatboro is 0-6 overall and 0-3 in the SOL American.
Last Week: GA rolled, 49-33 over Lawrenceville of N.J. The Hatters lost 38-26 to Upper Moreland.
Players to Watch: Youngster Colin O’Sullivan is under center for the Hatters. Jerry Griffen-Bacthler is a versatile threat for the Patriots.
Prediction: Germantown Academy 35, Hatboro-Horsham 20.

Central Bucks South at Pennridge
Time/Place: Friday, 7 p.m., at Pennridge.
On Twitter: @khunter10.
Records: CB South is 4-2 overall and 1-1 in the SOL Continental. Pennridge is 1-5 overall and 0-3 in the SOL Continental.
Last Week: The Titans won 28-11 over Tennent. The Rams were blanked 35-0 by CB West.
Players to Watch: Joe McSweeney can run hard for South. Taj Utsey is a running and receiving threat for the Rams.
Prediction: Central Bucks South 30, Pennridge 18.

Plymouth Whitemarsh at Cheltenham
Time/Place: Friday, 7 p.m., at Cheltenham.
On Twitter: @ADRobinson3.
Records: PW is 5-0 overall and 2-0 in the SOL American. Cheltenham is 5-1 overall and 2-0 in the SOL American.
Last Week: The Colonials won 28-6 over Upper Moreland. The Panthers won 41-7 over Upper Dublin.
Players to Watch: Josh Lynch is a solid wideout for PW. Sam Sykes is a speed runner for the Panthers.
Prediction: Plymouth Whitemarsh 30, Cheltenham 17.

Cardinal O’Hara at Lansdale Catholic
Time/Place: Saturday, 5 p.m., at Wissahickon.
On Twitter: @khunter10.
Records: O’Hara is 1-4 overall and 0-1 in the PCL Blue. LC is 3-3 overall and 1-1 in the PCL Blue.
Last Week: O’Hara lost 24-7 to West Catholic. LC fell 40-14 to Bonner Prendie.
Players to Watch: Danny Dutkiewicz is running tough for the Crusaders. Brandon Schumm covers a lot of ground at middle linebacker for O’Hara.
Prediction: Lansdale Catholic 30, Cardinal O’Hara 28.