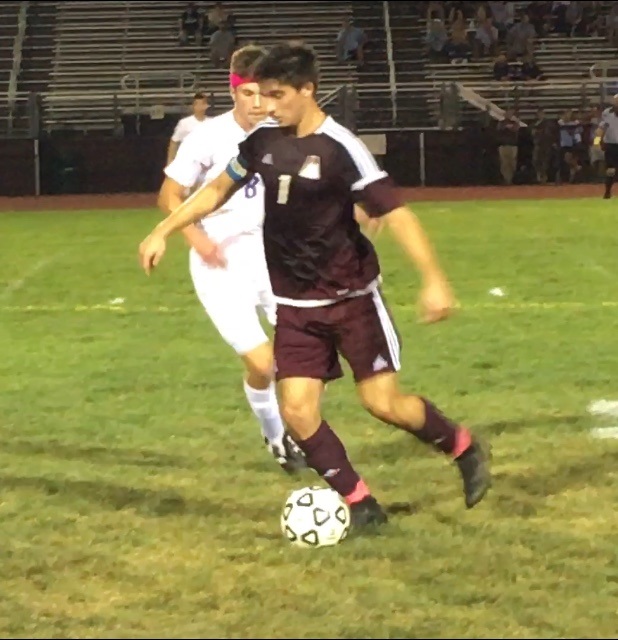 ABINGTON >> It was a finish a top-flight player in Europe would have been happy with and it happened at Abington’s stadium.

Galloping Ghosts junior Arsen Bado, in his first year playing organized soccer, met a picture-perfect cross by Nevin Baer at the far post and expertly tucked in the ball for his second tally of the night. The striker has already wowed coaches with how far he’s come in a short time and is beloved by his teammates.

Bado, who originally hails from Burkina Faso in West Africa, is just trying to enjoy the experience and had a night to remember as his brace pushed Abington past Upper Moreland 3-1 on Wednesday.

“I try to read the game and try to put the ball in the net,” Bado said. “It’s instincts. I never work on it, just reacted.”

Bado came to Abington as a sophomore but didn’t play on the team last season. He had some experience with the game, but again no real refined structure but playing for the boys soccer team piqued his interest and he tried out this summer.

The coaching staff knew they had a very raw player but one with plenty of potential and an eagerness to learn. Bado credited co-captain Baer and reserve winger Antonio Ditri among the guys who have fed him good advice this fall and the coaches say he’s already their most improved player.

“He’s a great guy,” Baer said. “He just brings the team spirit up and jokes around with us. It’s great that we can get him on the field now and he can get us some goals because he’s really been working hard the whole season to get better.”

Bado, after finishing his interview and seeing Baer was up next, flashed a wry smile and said “that’s the boss,” to his senior teammate.

An athletic presence with good pace, Bado just needed to get a better feel for being part of a structured team and playing with and off his teammates. He scored two goals earlier this season against Plymouth Whitemarsh but his double tally on Wednesday had more weight.

The Golden Bears (5-7-0, 3-6-0 SOL American) were looking to end a string of up-and-down play with a strong performance on Wednesday and while they didn’t get the result, it wasn’t for a lack of effort. UM traded runs with Abington in the first half, but just couldn’t quite put the last piece together in front of goal.

“The quality of our passes and quality of our movement in the final third wasn’t good enough so we didn’t many good shots off at all and that was the story of the night,” UM coach Matt Duffey said. “We know they’re a really good team and first place and we’d have a tough time with them. If we put in a good effort, we might have a chance against them and they put in the effort.”

Abington (10-1-1, 8-0-1) celebrated its Senior Night on Wednesday and the seniors put the pressure on early. Reese Gibbs, the team’s other senior co-captain, opened the scoring with a golazo of a hit from deep range that found the sweet spot between the keeper’s gloves and the crossbar with 19:42 left in the opening half.

The Ghosts continued to apply pressure and found a second goal with 6:17 left in the second half. Senior midfielder Andrew Kulynin won the ball in the center of the park, dribbled all the way out to the left flank, got to the endline and cut along it before dropping the ball on the foot of Bado rushing the near post.

“He changed the complexion of the game up top doing the things he did,” Abington coach Randy Garber said of Bado. “He had two nice goals. He’s been coming along, each day in practice he gets better and better and has a little more confidence and tonight seemed like a good night to give him a chance and see how he does in a real game. He came up big.”

Prior to a defensive breakdown that allowed Baer the time to set up his cross on the third goal, the Bears played a very strong match defensively. Keeper Aaron Snyder, a freshman, was terrific with six saves and the backs and defensive midfielders in front of him did a good job closing on Abington’s technical players.

The Bears got on the board shortly after Abington’s second goal when Dylan Swedberg drew a foul in the box then stepped right up to take the penalty kick. Swedberg, a senior forward, buried the try with confidence to make it 2-1 at the half.

Upper Moreland faces Hatboro-Horsham on Friday, looking for a better showing than their first meeting with the Hatters.

“We know we’re not the most skilled team, at least not the way some of these teams are but if we’re scrappy, we work hard and we play good defense, we’re going to be in games,” Duffey said. “I’m happy they came out and worked so hard. We know these two games are tough but we think we have winnable games coming up and that’s what we have to focus on.”

Bado’s second goal came with 17 minutes to play, giving the Ghosts a needed cushion on a night where Baer admitted they didn’t play their best. Still, he and Bado connected on a brilliant finish and the newcomer’s lively energy off the bench was the lift Abington needed.

“I needed to be more aggressive and try to work with the team,” Bado said. “I need to understand how they play and work with them. I’m real happy playing with this team.”

Garber said Bado’s done a ton of work on his own to get more technically skilled and add elements to his natural speed. He’s already fit in with the Ghosts and they see him fitting in with their postseason aspirations.

“They enjoy him, he’s a great guy and a lot of fun to have around,” Garber said. “He’s going to make a big impact I think down the road just because of his speed, his quickness and his ability to score goals because he can score goals.”