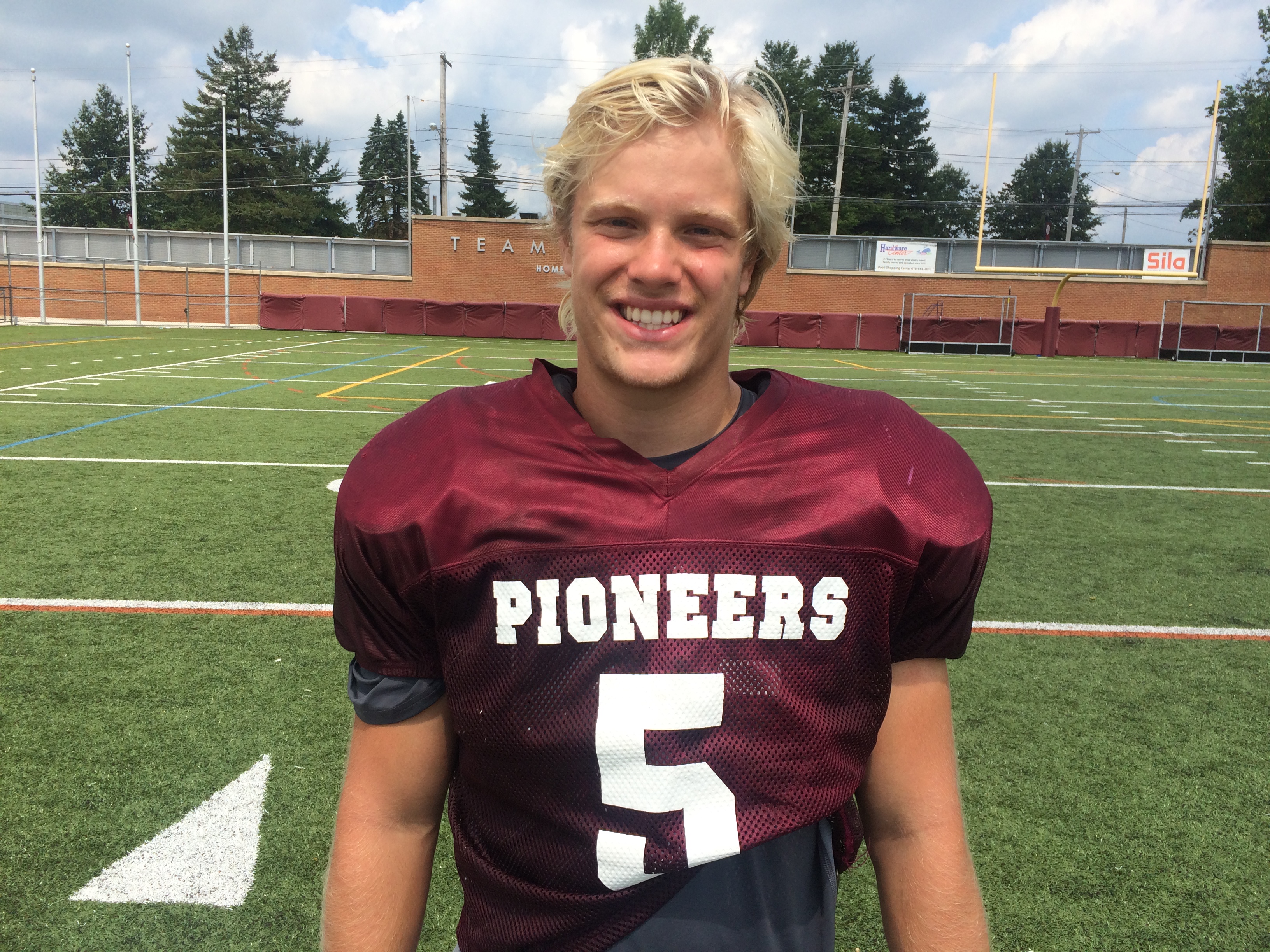 The versatile senior running back, one of the most productive runners and pass receivers in the Central League, is averaging more than six yards per carry for the Pioneers this fall, gaining 599 yards in 89 carries, catching nine passes for 212 yards, and scoring 10 touchdowns. Last spring, he was a fine short stick defensive midfielder for the Conestoga boys’ lacrosse team, and he received All-Main Line honors as a junior in both football and lacrosse. A three-sport athlete, he wrestles in the winter for the Pioneers.

Q: Have you always played running back since you began playing football? Who is your favorite running back and why?

A: Yes, ever since Pop Warner football I have always been a running back because of my speed, although I also played quarterback for a little bit. My favorite running back, not based on team, because I’m a die-hard Eagles fan, is Christian McCaffery. His running style is super impressive and I think it’s similar to my own. He even kind of looks like me.

Q: Tell us a little about your off-season training. What aspect of your play did you work on the most during the off-season?

Q: You mentioned that the key to your great first-half performance against Harriton (179 yards in 10 carries) was the Pioneers’ offensive line. Just before the first half ended, you broke free for a 73-yard run that set up your third touchdown of the half. Can you tell us a little regarding how the 73-yard running play developed?

A: The play developed slowly and I had to be patient and let the hole open. Once my big dawgs up front pushed through, the hole opened up super wide and I was able to just punch it and break to the second level.

Q: Who have been your biggest football mentors, and what was the most important thing each of them taught you?

A: My coaches have been my biggest mentors and help me be the best I can. They encourage me and teach me something new every week. Shout out to running back Coach Hadrick – he has been mentoring me since my sophomore year and helped me progress as a player and a person. Coach [Matt] Diamond and Coach Davis are awesome. They have my back and will do anything to help me. Coach Kaminskas helped me when I was defensive player, but he is always working with me in the weight room and pushing me hard. Dante Coles has been one of my biggest supporters.

Q: You wear No. 5 for the Conestoga football team. Is there a reason you picked this number – does it have any significance to you?

A: It’s my favorite number. I started wearing it in lacrosse and then it carried over to football. I think it has some luck for me.

Q: What non-sports extracurricular activities have you participated in at Conestoga?

A: I’ve participated in multiple clubs, Lewis Elkins Club to help give back to the community, Above the Influence Club and Young Economists Club.

Q: What is your favorite course at Conestoga?

A: Probably AP Economics- I have a lot of interest in business and economics.

Favorite book: Where The Wild Things Are.

Person I most admire: “My grandfathers – Jim Casey and Frank Kirk – are my biggest supporters and I admire them.”

To view a gallery of the Main Line Boys Athletes of the Week from 2013 to present, click here

St. Joseph’s Prep gets back on track, races past La Salle
Friends’ Central’s Ryan Lynch is Main Line Girls Athlete of the Week