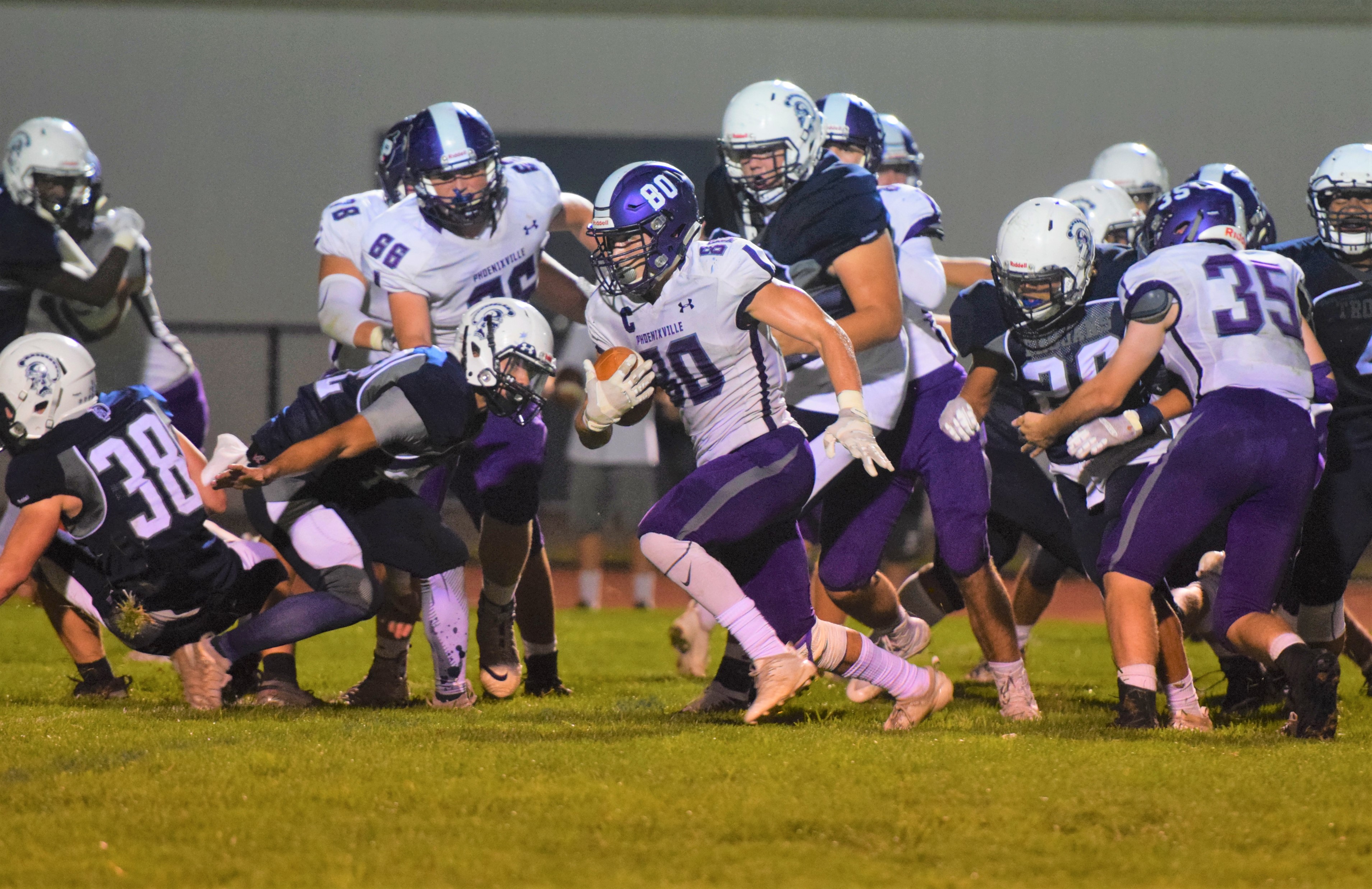 POTTSTOWN >> His jersey number is a common one for wide receivers, but it doesn’t speak to Anthony Stevenson’s whole body of work on the football field.

His job description also includes running back and defensive back. Friday evening, the Phoenixville senior made considerable impact out of the offensive backfield, helping the Phantoms outlast Pottstown at Grigg Memorial Field, 26-18.

Stevenson got his number called 26 times on the night, and he responded with 123 yards and a pair of touchdowns — one rushing and one passing. His hard running helped drive Phoenixville to its second win of the season — after rallying from an 18-point deficit in the first half — and give head coach Don Grinstead a memorable return to his old stomping grounds, where he last toiled as the Trojans’ boss in 2015.

“I do whatever is best for the team,” Stevenson said afterward. “Whatever the situation calls for, I do it.”

For Pottstown, a situation of having seven freshman starting ultimately caught up to it. The situation was compounded with a number of Trojans working both sides of the ball, bringing the fatigue factor into play.

“The freshmen did a good job,” head coach Jeff Delaney said. “But I knew if they went into a double-power I (offense), we’d suffer.

“We pretty much had everyone going both ways, and it wore us down. Defensively, we had four freshmen playing, and you can’t match up that way.”

Its 2-4 overall record notwithstanding, three of Phoenixville’s last four games came down to the final seconds before being decided in their opponents’ favor. So the Phantoms were unfazed by a wacky — and potentially upset-special — end to this Pioneer Athletic Conference Frontier Division game.

Inside the game’s final minute, the visitors had the ball at Pottstown’s 34 and an eight-point lead. A fumbled exchange on third down was recovered by Dereck Darden, who cut toward the Trojan sideline and down the field toward the Phoenixville end zone.

In a wild turn of events, the ball got fumbled and recovered by a “phantom” Phantom, the end ruling a touchback. Phoenixville got the ball at its 20, where quarterback Jack Pizor took a knee to run out the clock.

“The kids hustled back,” Grinstead said in recounting the play. “That symbolizes our season. Eleven guys running back on the play.”

“We persevere,” Stevenson added. “We don’t give up.”

Pottstown (0-2 Frontier, 3-3) was in control for the better part of the first half, riding the fleet feet of quarterback Joneil Oister to an 18-0 advantage. Oister (12 carries, 116 yards) rushed for touchdowns on three straight possessions … scoring runs of 61, 49 and one yards in a 9:26 span.

But the momentum shifted in Phoenixville’s favor in the final 2:21 of the half. Stevenson capped a nine-play, 48-yard drive by scoring from eight yards out, On Pottstown’s first play of the subsequent possession, a fumble was recovered by Pizor at the Trojan 32 and run back for a touchdown which, capped by Pizor’s conversion pass to Stevenson, cut the Pottstown lead to 18-14 at intermission.

“The kids do believe they can come back,” Grinstead said. “Our last three losses were by one touchdown. I think tonight our endurance and conditioning took over.”

Phoenixville went ahead for keeps at the three-minute mark of the third quarter, Pizor scoring on a five-run burst up the middle. Then with 9:40 left in the game, he and Stevenson hooked up for a 21-yard TD pass and a 26-18 lead that survived the potentially devastating next-to-last play.

“In the third quarter, our line took control,” Grinstead noted. “Pizor and Stevenson made the plays.”
Being back at Grigg, albeit as a visitor, struck a poignant note with Grinstead.

“It was weird, being on the visitors’ side and in their locker room,” he said. “I poured my heart and soul into the program. The kids were great to me.

“It was a little emotional. When you invest in something like this, it’s hard to surrender it.”

NOTES >> Grinstead on Stevenson, who also had a pair of catches for 25 total yards: “Pound for pound, he’s the toughest kid on the team. … Delaney noted there were three changes of possession on the game’s penultimate play. … The Pottstown Police Athletic League (PAL) Trojans flag football program played during halftime. The Blue and Gray teams were comprised of players in the 5-to-7 age group.