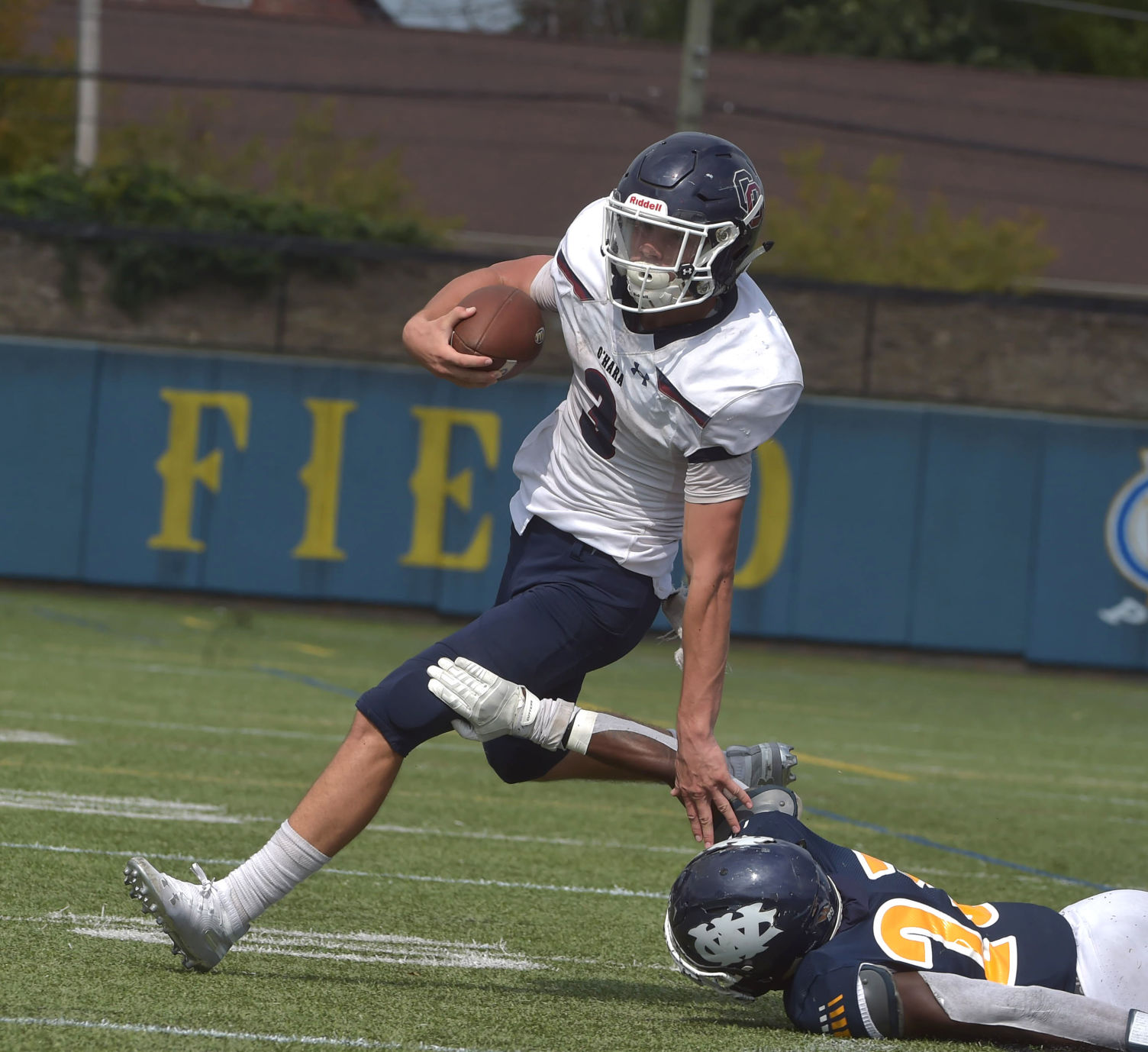 Cardinal O'Hara quarterback Cole Sprague, here slipping a would-be West Catholic tackler, had the Lions in the lead by a point when he went down with an ankle injury Saturday. (PETE BANNAN/MEDIANEWS GROUP)

PHILADELPHIA — Cardinal O’Hara had a plan to beat West Catholic Saturday and it entirely revolved around quarterback Cole Sprague. Then Sprague got hurt.

After that, the Lions simply could not move the football. They gained minus-9 yards. They had one first down. They couldn’t punt. It was bad. They lost 24-7 to West Catholic at Vidas Athletic Complex.

It was O’Hara’s fourth consecutive defeat. The Lions are now 1-4 overall, 0-3 in the Catholic League Blue Division.

“That’s on me for not giving our other guys that much work,” O’Hara coach BJ Hogan said. “We had multiple guys go down where we’re just trying to fill in. We were on our fourth and fifth defensive backs out there. Guys are cramping. You can never prepare enough. You can prepare your 1’s and 2’s, but once you start getting in (where) you need those guys to step up…

Sprague, mostly on designed runs up the gut, gained 56 yards on 16 carries before he rolled his ankle midway through the second quarter. The previous drive ended with his three-yard power into the end zone, which gave O’Hara a 7-6 lead. Chris Sheffer replaced him behind center, and the first snap went over his head for a 15-yard loss.

It was a sign. O’Hara finished with 32 yards of total offense. Without Sprague, there were a bevy of negative runs and plays that had no chance of being successful. Still, that 7-6 lead held into the fourth quarter before West Catholic finally broke through.

West Catholic quarterback Zaire Hart-Hawkins escapes the rush of Cardinal O’Hara defender Solo Bambara, right, with a push to the helmet in the first half of what became a 24-7 West Catholic win at Drexel University’s Vidas Sports Complex. (PETE BANNAN/MEDIANEWS GROUP)

“I love their fight, we actually played four quarters really tough,” Hogan said. “We just ran out of dudes. When Cole went down, we kind of had to go into that single wing thing, and we haven’t ever practiced that with Hunter (Whitlock) playing quarterback and we had a couple negative plays.”

Whitlock replaced Sheffer after one series. He wore thick gloves on each hand and was not a threat to throw the football. The Burrs (4-2, 2-1) stacked the box and attacked. They had good field position on most drives but could not capitalize – until a kid from Delaware County decided to take matters into his own hands.

Caleb Smith grew up, and still lives, in Sharon Hill. He was at Academy Park for two years before succumbing to the recruitment of West. He touched the ball once in this game, catching a pass in the flat, making a move and scooting in for a 16-yard touchdown.

“In the beginning, we just weren’t clicking because we came out thinking everything was easy,” Smith said. “But then we got it together, talked through, talking to the coaches, working all together and we finally played our game.”

Cardinal O’Hara’s Hunter Whitlock, who took over at quarterback in the second half, found it tough going against West Catholic Saturday. (PETE BANNAN/MEDIANEWS GROUP).

Three plays after that score, Hogan tried a halfback pass with Mike Levy. He was stripped and sacked almost as soon as he touched the ball. Eden Johnson scooped it up and raced 13 yards for the put-it-away TD.

“If Cole doesn’t roll his ankle, we have a shot to go beat a really good West Catholic team,” Hogan said.

West noticed it, too. No team wants to win on these terms, but no team is going to go easy on its opponent because of injuries.

“Yeah, when they started getting hurt, we started feeling bad, but we know we’re winning so we started to put that pressure on,” Smith said. “We started to go through.”

Zaire Hart-Hawkins led West with 210 passing yards and three touchdowns. O’Hara did everything it could to keep the electric quarterback and top receiver Julio DaSilva in check. It worked for three quarters.

But with his quarterback hurt, his backup unavailable and a load of other injuries, Hogan was left to improvise. Next week, at least, there will be time to prepare.

Tinney, April lead the way for Ridley
St. Joseph’s Prep gets back on track, races past La Salle