Haverford defense gets the ‘train rolling’ past Springfield 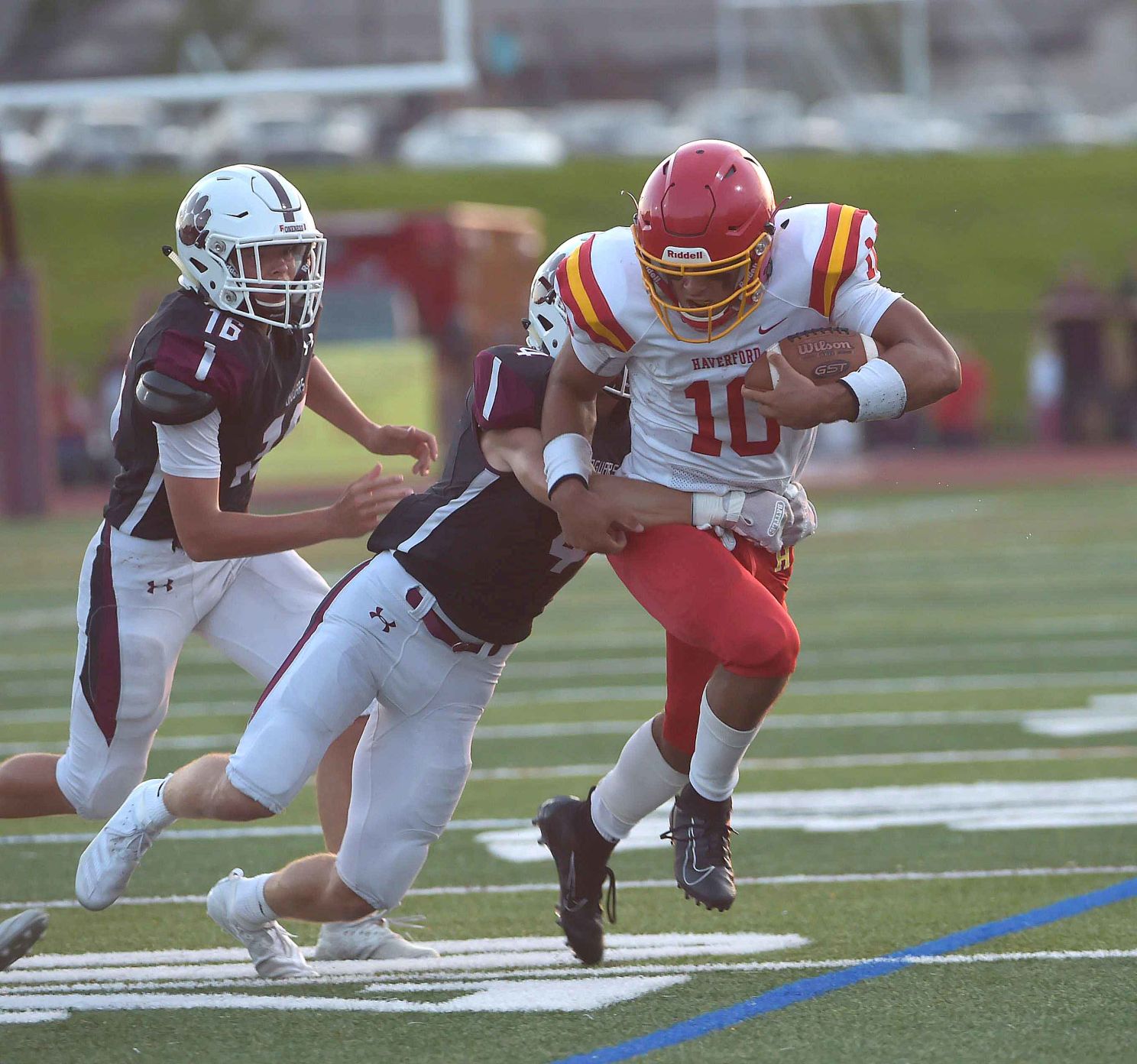 Haverford quarterback Trey Blair ran for 59 yards and passed for 109 in a 34-7 win over Springfield.

HAVERFORD — Haverford’s defense was on the field for an astounding 13 possessions Friday. Nine resulted in punts. There were two interceptions. One was a turnover on downs, the other a touchdown.

It was a strange game full of three-and-outs and spurts of electric plays. The one constant was this: Springfield couldn’t really do much with the ball. So it went for the Fords, picking up a 34-7 for their fourth straight victory. They are 4-2 overall, 3-1 in the Central League.

The Fords lost August games to good teams in Archbishop Carroll and Garnet Valley. Then they figured it out. They have done it behind a defense that doesn’t yield much. On this night, it was one score — when the Cougars got a short field — and 115 total yards to the scrappy visitors from Springfield (2-4, 2-3).

Higson’s interception on the third play from scrimmage set up the Fords’ first touchdown, a 15-yard Chasen Wint run. Jimmy Wright’s pick-six midway through the fourth quarter put a bow on a convincing victory. In between, there were just six Springfield first downs and punt after punt after punt.

The offense didn’t do an enormous amount of work, but it didn’t need to.

“Our defense is playing outstanding, and that’s what we’re based on right now,” Haverford coach Joe Gallagher said. “Our ‘D’ keeps us in it until we figure things out. We got some playmakers that can make plays — Chasen Wint, obviously, Trey (Blair), guys like that — but a good defense. Very happy with (our) defense.”

Haverford 12, Springfield 0, 539 1q. Chasen Wint again. This time with a 3-yard TD run. He had 44 of the 84 yards on that drive. This is getting…#Delcofootball pic.twitter.com/7gwxqUOqHB

Wint rushed for 138 yards and three scores. His second, a three-yard burst midway through the first quarter, capped an 84-yard drive. His last, a 34-yard rumble in the fourth quarter, ended the first-team offenses’ evening.

Blair did the rest. He ran for 59 yards and passed for 109. His 20-yard touchdown strike to Casey Gilroy made it 20-0 just before halftime. At that point, it looked like a Haverford runaway. But Springfield did just enough to hang around.

The Cougars forced a Blair interception to start the second half, then scored on Matt Ellison’s four-yard pass to Alex Williams. They had three other drives with a chance to cut it to a one-score game but did not move the sticks.

“We had some young guys out there,” Springfield coach Chris Britton said. “It took a while to figure out we could play with them. … They’re a good team.”

Haverford 6, Springfield 0, 1000 1q. After an interception, Chasen Wint scoots in for a 10-yard TD. Great start for Haverford. #Delcofootball pic.twitter.com/rwDBEIXy9a

“We made our minds up after the second loss to Garnet by a touchdown that we’re going to get it right and just gonna keep playing,” Gallagher explained.

Haverford’s top wide out, Shane Mosley, a verbal commit to Maryland, suffered an injury last week and is expected to be out a while. He said he hopes to return this season.