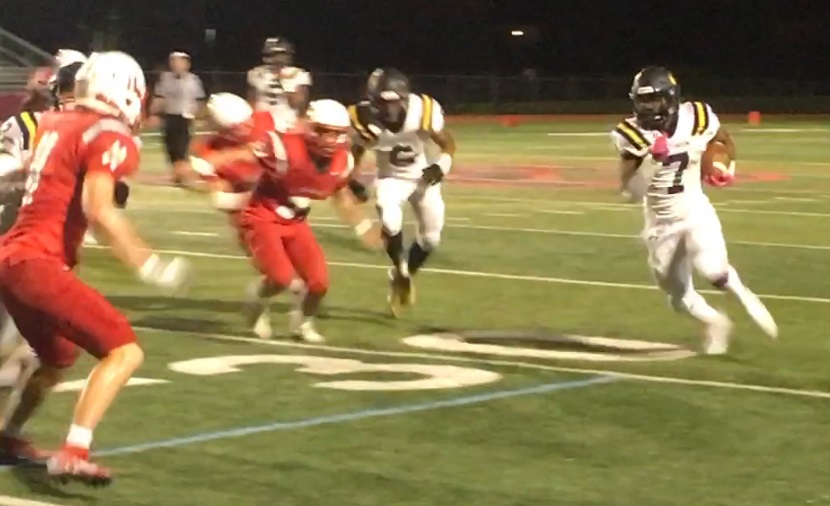 UPPER DUBLIN >> Few bonds are tighter than the one between a quarterback and his receivers.

Adonis Hunter has been throwing footballs to Nate Edwards for a long time, and if anyone thinks one drop is going to stop that from happening, they clearly don’t know either of the Cheltenham seniors. So when Edwards dropped a pass early Friday night at Upper Dublin, it only made Hunter more determined to hit his longtime connection.

Edwards hauled in three catches, winning two jump balls, as the Panthers won what they dubbed a revenge game 41-7 over the banged-up Cardinals on Friday night.

“It was a revenge game, they kicked us out of the playoffs last year and all we did was prepped and practiced and kept the physicality and the tempo going,” Edwards said. “We came out with the win.”

Hunter, a three-year starting quarterback, completed 5-of-8 passes for 216 yards and two scores while adding a rushing score to his line. His first completion of the game went 24 yards to Darren Bennett, who tapped the ball to himself midair to make the grab.

It was a very positive omen and the senior only built on it during the team’s next drive. Hunter dropped a dime to Edwards, who was flying down the left sideline, hitting the receiver in stride behind a defender and letting Edwards do the rest, shaking out of a tackle around the 20 before finishing the 68-yard TD.

As for Edwards two other catches, they’d be prime candidates for the “You got Mossed” highlight reel. The wideout out-jumped a taller defensive back then took off untouched for a 65-yard score midway through the second quarter.

His final grab didn’t go for a touchdown, but it sure helped set up one. On a 3rd-and-9 from their own 21, Hunter again lobbed one up that Edwards came down with, this time over two UD defenders and teammates Sam Sykes for a 35-yard grab.

“My quarterback just put it up there,” Edwards said emphatically. “If you put it up there, I’ll go for it and that’s what it is. He saw the defense, saw what they were playing and allowed me to go get it and I snatched it.”

Edwards finished with three receptions for 168 yards and added a 35-yard carry.

“We’ve got speed, man,” Hunter said. “We have great athletes and no matter how far you play back, we like our guys.”

The Panthers capped the drive with a Siddiq Williams touchdown after Jon-Marc Foreman came down with a weight room catch of his own for 29 yards.

“We just trust each other in any situation,” Hunter said. “Nate could drop 1,000 balls in a row and I’m going to throw it to him 1,001 times. I trust all my guys, I trust the line and when we get it going, we keep it going.”

Senior running back Jamir Barnes is the engine for Cheltenham, but there are a lot of talented players on the roster who love to take advantage when they’re given a chance. Edwards, who also plays corner back on defense, is right at the top of that list.

“Nate will be the first one to tell you he had a faster track time than Jamir too,” Panthers coach Ryan Nase said. “He’s fast, he’ll make plays, he’s not afraid to go up and get the ball and he’s one of the toughest kids in our school. He’ll hit you, he’ll run by you and he has no fear. He’s just a dog.”

Nase isn’t from Cheltenham but it didn’t take him long to learn the togetherness that binds the community and is especially prevalent in the program he took over three seasons ago.

“This is the part I like is these kids have known each other so long that this isn’t the first time Adonis threw a ball up to Nate and he went and got it,” Nase said. “They’ve probably been doing that since fifth grade, it’s the same with TJ (Harris) and Jamir and it’s huge we have that. All four of them played when they were sophomores.”

The past two weeks, the Panthers have allowed a total of zero points in the first half.

Certainly, the absence of UD’s standout quarterback Mike Slivka played a part on Friday, but that’s not to take anything away from the way the Panthers defenders played. They were just as eager as the guys on offense to re-write the script after last year’s two losses to the Cardinals and didn’t care who was lining up against them.

“All week, it was just our practice and preparation,” junior co-captain linebacker Zach Gaffin said. “We knew the formations and knew what the play was before it started. We trust each other and when we have each other, no offense or defense will get through us. We’re a family here and we prepare that way every week.”

Slow starts were an issue for Cheltenham out of the gate this season, but they’ve been really good at starting the game since SOL American play has started. On top of the first half shutouts, the Panthers scored on their first three drives against Quakertown and Upper Dublin.

“It’s all focus,” Gaffin said. “We stress it a lot in practice, the weight room and classroom, staying focused is what gets it done.”

“We know what we have,” Hunter said. “I say it all the time, the only people who believe in us is us. As long as we have each other, we don’t pay attention to what people say, we just play.”

Cheltenham faces another titanic conference game next week when it hosts 5-0 Plymouth Whitemarsh. PW had a bye this week and Nase noted the Colonials system is tough to plan for, a task made tougher on a short week. But, it’s what his team worked all offseason for and they checked the first box off Friday night.

“After the way our season ended here last year, we were about as low as low could be when we walked off the field,” Nase said. “We were not exactly sure where the program was going to go, it was that defeating of a loss but we swallowed it, took it on the chin for a couple weeks and regrouped. Now we put ourselves in a position where we control our own destiny.”

The last two weeks weren’t kind to the Flying Cardinals.

Between injuries and back-to-back losses, Upper Dublin now faces a short week of preparation for an away game at Quakertown. With Slivka and junior receiver/corner Micah Bootman among the cast of wounded on the sideline, plus the addition of receiver/safety Brian McCarry in the second half, the Cardinals’ hand has been forced a bit.

“Look, it’s no excuse, nobody’s feeling sorry for us and we don’t want anybody feeling sorry for us,” UD coach Bret Stover said. “We have kids playing who the game is a little too fast for them right now but I saw progress tonight. That’s one of the things you look for when you’re forced to play as a young team and put in kids who aren’t necessarily ready to play and I saw that.”

Sophomore Tristan Cairnes made his first start at quarterback and gamely battled against an aggressive Panthers defense, accounting for the only score on a 10-yard run. Senior Bazel Brady, who is only in his first year playing football, stepped in to punt with Slivka sidelined and caught four balls for 33 yards.

UD’s beaten-up defense did make some stops and played better after the first three drives.

“We had guys in position and they out-athleted us on several plays and that’s just a tribute to them,” Stover said. “I know they circled us and we’ve been their Achilles Heel but that’s just a good football team. Ryan does a nice job with those kids and they play hard, they hit you and play football.

“You take your beating and you learn from it and that’s what we’ve had the last couple weeks. We’ve circled the wagons, outside noise doesn’t bother us.”

While the two teams played hard between the lines, once the game was over it was all respect.

Nase, after going through the handshake line, stopped to wish Slivka a quick recovery and every Cheltenham player came by to wish all the injured Cardinals well. Players like Barnes, Hunter, Sam Sykes, Williams and more also had their own words of encouragement for the Upper Dublin quarterback.

Nase said his only regret on Friday was that Upper Dublin wasn’t at full strength while not even mentioning his own team is dealing with a few injuries of its own right now.

Stover had plenty of praise for the Panthers as well, saying he wouldn’t be surprised to see Cheltenham make a run at the District 1 title but adding he’d love to see a rematch in the postseason.

“You want to beat the defending district champion at their best and it sucks seeing Mike Slivka on crutches just because of the type of player he is and from everyone who met him saying the type of kid it seems he is,” Nase said. “I would have loved to go toe-to-toe with them at full strength to see who was best.”