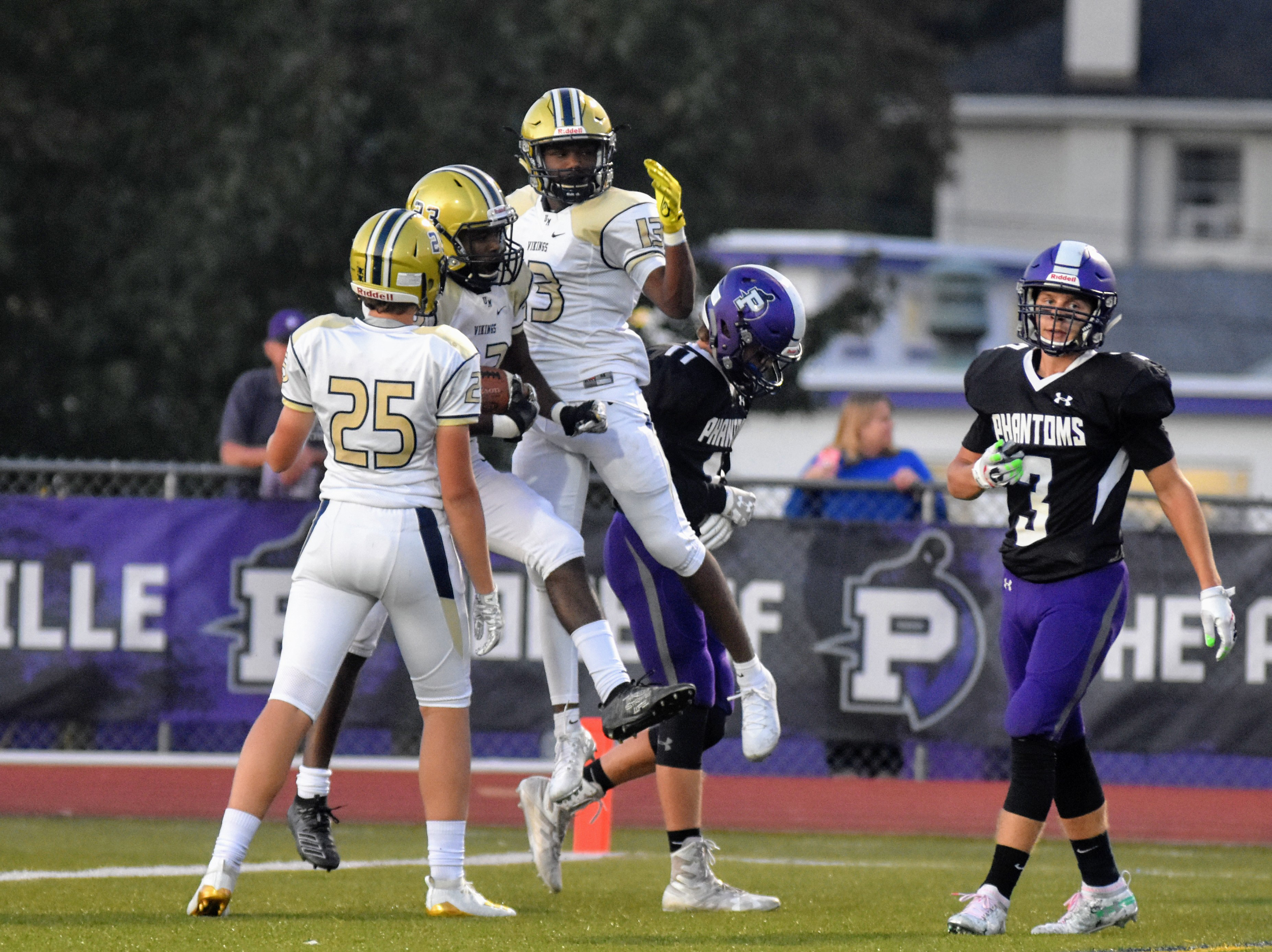 Phoenixville >> On a night when the school retired the number of its most accomplished linebacker, Neal Olkewicz, Phoenixville’s swarming, gang-tackling defense resembled that type of tough, physical, aggressive football.

Ultimately though, it wasn’t enough for the Phantoms to stop Upper Merion from a 21-14 Pioneer Athletic Conference Frontier decision Friday night.

In a pre-game ceremony, the PASD retired Olkewicz’s number 75. He went on to star at the University of Maryland and in the National Football League with the Washington Redskins.

The visiting Vikings scored the first two touchdowns of the game, a 25-yard run by Taiyan Lobban and an 8-yard run by Anthony Swenda, to take a 14-0 lead at halftime.

But the Phantoms used a 5-yard TD pass from quarterback Jack Pizor to Brady Aselton to make it 14-6 by the close of the third period.
Both defenses stiffened when they had to, creating a lot of back-and-forth action throughout the contest.

Each side scored a TD in the fourth quarter. Swenda scored his second TD on a 34-yard burst to make the score 21-6. The Phantoms countered with a 24-yard scoring pass to Anthony Stevenson from Pizor. Pizor also found Aselton for the two-point conversion, creating the 21-14 final score.

Lobban, a 5-10, 170-pound senior, was used as a running back, wideout and defensive back. He responded well in all areas, rushing for 29 yards and the first Upper Merion score, catching three passes for 44 yards and making a number of key plays on defense.

“It was definitely important for us to keep our head in the game,” said Lobban. “Me and my guys weren’t out.”

Phoenixville recovered a fumble late in the second half, giving the Phantoms a final chance at the end of the game. But a fourth-down pass was broken up, and the Vikings ran out the clock.

Justin Fisher, Christopher Nero and Tremayne Brown made the blocks up front that paved the way for the running backs and senior quarterback Dale Clayton, who engineered the offense.

The Vikings and Phantoms used a number of players on offense and defense, and they came through. The two Frontier ball clubs are in similar situations with a host of players going both ways and getting tired. Yet they persevered and fought, resulting in the tight game played in front of a large crowd.

“(Making stops and plays) was one thing we were able to do,” said Upper Merion coach Victor Brown. “A good number of times we made nice plays when we needed to. Our defense played well. We got stops. The strength of our team is our defense.”

Some costly penalties hurt Upper Merion in the second half. That allowed Phoenixville to pick up some big first downs and keep their comeback hopes alive. Brown said the penalties are one area of the game he would like to see cleaned up.

“We have to keep working and getting better at it,” said Brown. “But Don (Phoenixville coach Don Grinstead) had those guys ready to play. It is tough in the Frontier Division. You get everybody’s best every time you take the field. Phoenixville played a great game.”

Phoenixville got another big all-around game from running back/wideout/defensive back Anthony Stevenson, who also handed the punting duties and made an electric punt return that set up a Phantom touchdown.

Sophomore Tre Davis was Phoenixville’s leading rusher with 41 yards on 17 carries, most of it coming in the second half. Davis was also big in the Phantom secondary, along with Stevenson, Max Strunk and sophomore Chase McDonnell.

Up front, Phoenixville got a lot of pressure and pursuit from Daniel Gray, Aselton, Matt Johnson, Solomon Ortiz, Roman Ciaverelli and Nolan Martin. Vizor was active at linebacker, along with sophomore Sam Fisher and senior Ignacio Ortiz, who have been pressed into service due to multiple injuries.

Both coaches were proud of the way their teams performed and offered respect for the other side’s play.

“Our whole defense has played so well in all five games, not just tonight,” said Grinstead.

“We got a turnover when we needed it. It is a sign of toughness.

“Victor’s teams are well-coached and play hard. I think we matched that for most of the game. I am really proud of how hard my guys played.”

Notes >> Phoenixville is having a Mini-Thon to help fight pediatric cancer and Play for The Cure. … Phoenixville’s baseball team received their PAC championship rings between the first and second quarters.