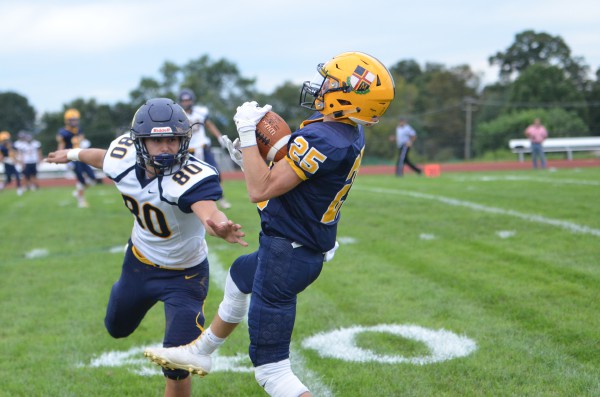 RED HILL >> The Pope John Paul II football team has been rolling along ever since losing a 26-point lead in an opening game setback. Since then, the Golden Panthers have racked up more than 50 points three times while shutting out two opponents during a four-game winning streak, including a 54-0 win Friday night over Upper Perkiomen in the Pioneer Athletic Conference Frontier Division opener for both teams at Indian Stadium.

Quarterback Kamal Gray completed 12 of 16 passes for 209 yards and five touchdowns, all in the first half as PJP (4-1) ran out to a 47-0 advantage. Steve Skarbek got the Panthers going with a 39-yard pass reception for a TD less than a minute into the contest and intercepted a pass later in the quarter. Justin Kormos caught two touchdown passes and Andrew McDonald ran for two scores for the visitors, who will face defending division champion Pottsgrove next week.

“In all facets of the game, we played a very good game,” said Pope John Paul coach Rory Graver. “We’ve got to move on quickly. We’ve got a game next week against a very good football team.”

“We did really well,” said Skarbek. “We came out with the motive of shutting them out. We did what we had to do and got the third-stringers in.”

PJP received the opening kickoff and scored on two plays when Kormos caught a short pass and turned it into a 29-yard gain and Skarbek pulled in a long pass over the middle and scored just 46 seconds into the contest.

The Golden Panthers also scored quickly on their next two possessions – a four play, 52-yard drive with McDonald running into the end zone from 35 yards out and a three-play, 63-yard drive topped off by a 16-yard TD reception by Chris Bruder.

By the half, PJP had gained 367 total yards to Upper Perk’s 31. Gray completed his first six pass attempts for 142 yards.

“He did really good tonight,” said Graver. “They came out playing ‘man’ against us.”

“They were getting open really well,” Gray said concerning his receivers. “I guess I made the right reads and hit them.”

Upper Perk threatened late in the half after recovering a fumble at the PJP 38-yard line, but time ran out on the hosts at the 13. The Indians marched from their 28 to the PJP three late in the third quarter, but that drive ended on an interception.

“We’re a depleted team and they’re a very good team,” said Upper Perk coach Tom Hontz. “They’re a lot more athletic basically at every position. You can’t do much about that. We have 18 guys on the injured list. We suited up 31 and six or seven were freshmen. We’ll keep plugging. Maybe we can get some competitive games yet.”

Now PJP must prepare for Pottsgrove, which has won three consecutive division titles and opened league play with a 30-6 win over Pottsgrove on Friday.

“We’ve got to put it behind us,” Skarbek said concerning Friday’s win. “Keep everything in the past and keep moving forward. Pottsgrove is going to be huge. They beat us the last two years. We haven’t beaten them since I was a freshman. That would be huge.”

PJP has now out-scored its opponents 189-13 after the 47-46 loss to Roman Catholic, which the Golden Panthers are still upset about.

“That kind of really still burns us a little bit,” said Graver. “That’s motivation. That keeps us from getting too high. Pottsgrove is the defending PAC Frontier Division champion. We’ve been looking up at them the last couple years. We’re just focusing on the little things.”