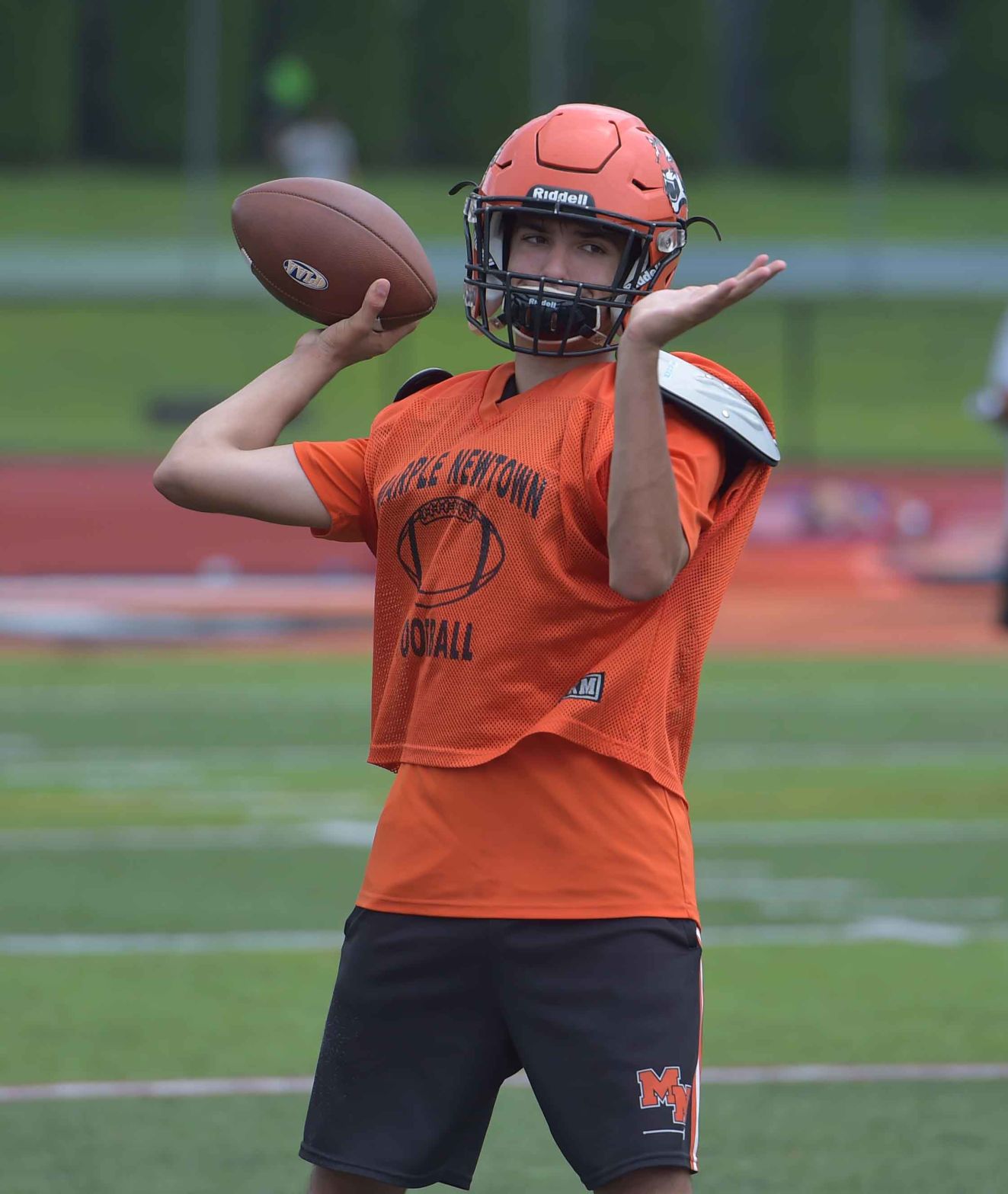 Joe Paoletti threw for 181 yards and a touchdown to lead Marple Newtown past Upper Darby, 17-12.

UPPER DARBY — No one can fault the Marple Newtown players for their soft schedule through the first four weeks of the season.

Friday night, the Tigers received their first true test of the 2019 campaign against an average-ish Upper Darby team, carrying a .500 record and looking every bit like one. Marple entered the day as one of five undefeated teams in Delaware County, locked in a tie for first place in the Central League with Garnet Valley and Strath Haven.

Just in case there was any doubt, senior wide receiver/defensive back Shane Benedict had a message for the rest of the Central League …

“I feel like we are the best right now,” he said.

Benedict felt confident to make sure a bold statement and backed it up with a spectacular interception late in the second half of the Tigers’ 17-12 victory at Upper Darby’s Memorial Field.

Marple is 5-0 overall and 4-0 in the Central League. But the Tigers have a long way to go before they can celebrate a perfect season. Strath Haven (4-1) is next and presents a more daunting challenge.

But the Tigers are a fun team that boasts one heck of a dynamic duo in junior quarterback Joe Paoletti and sophomore all-purpose standout Charlie Box.

Paoletti’s ability to evade defenders and throw on the run is reminiscent of his big brother Anthony, a two-time All-Delco and the county’s all-time passing leader. Joey is blazing his own unique path. He entered the weekend with the most touchdown passes (nine) and second-highest quarterback rating (167.91) in Delco.

Paoletti connected on 14 of 25 attempts for 181 yards and a 43-yard scoring pass to Box to give the Tigers a two-possession lead with a minute to play in the third quarter.

“I think there is more pressure on me and I just want to do the best that I can,” Paoletti said. “I want to be better than my brother, so that pressure is on me and I’m OK with that. We have guys who are working hard every day in practice, a great young class, and we’re getting better and better.”

Box ran for 89 yards on 14 carries, caught four passes for 59 yards, and made two interceptions, including the one that sealed the win with two minutes to play.

“We knew this was going to be our toughest test of the season,” MN coach Chris Gicking said. “Upper Darby came out ready to play, we heard they were having a ribbon cutting for the new stadium, so we knew they would be fired up and ready to play.”

Unfortunately, another week on the new turf field resulted in another bad injury for one of Upper Darby’s best players. One week after losing senior running back Kareem McAdams and senior linebacker Dezhan Peterson to potentially season-ending injuries, senior quarterback Kevin Kerwood had to be helped off the field in the first quarter with a knee injury. Corey Robinson, a junior with little quarterback experience, played the rest of the way for the Royals.

“It’s the game of football and it’s tough,” UD coach Richie Gentile said. “Robinson is a varsity player, a slot receiver. We have a sophomore (quarterback) that played JV but he’s not ready. Corey short-armed a couple throws, but he’s a real athlete.”

Are the Royals beginning to feel cursed on their shiny state-of-the-art turf field? Gentile could only snicker and shrug his shoulders.

“I’m just worried about getting ready for next week,” he said.

UD trailed 10-0 at halftime, but scored on its opening drive of the second half. James Tuayemie ran 14 yards to the end zone. UD recovered a muffed punt in the fourth quarter and scored its second TD, a six-yard run by Darryl Farmer with 5:15 left.

Tuayemie ran for 63 yards on 10 carries. Farmer added 47 yards on the ground, while Robinson was 6-for-14 with 57 yards and three interceptions in his debut at quarterback.

“We have to work on some things and (Robinson) will get better, we’ll get better as a team,” Gentile said. “The good news is it’s 0-0 when you show up and play next week.”