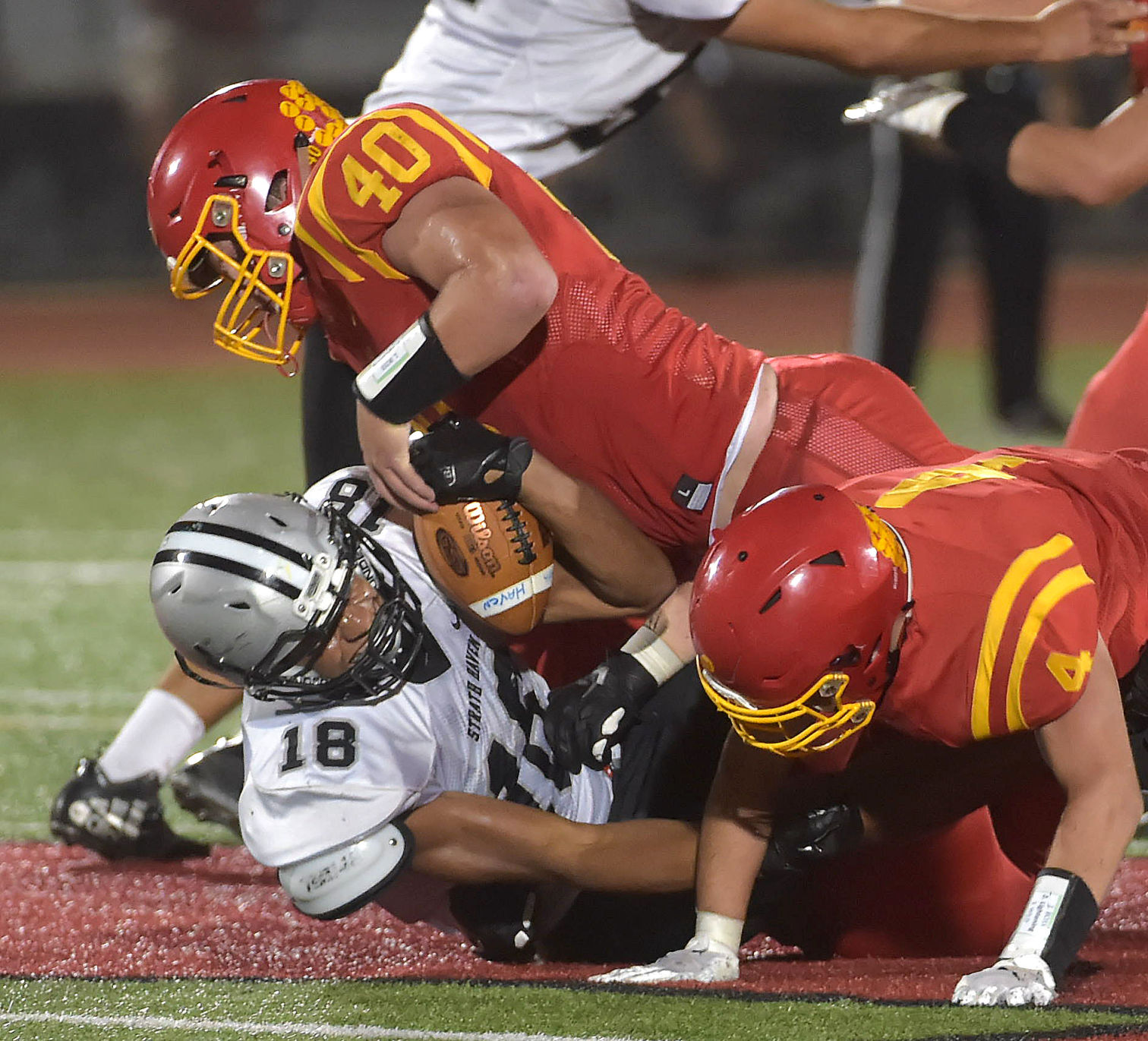 HAVERFORD — In terms of volume of plays to scheme against, Strath Haven’s offense doesn’t register as the most complex. Hasn’t for a lot of years. Won’t for as long as Kevin Clancy, Delaware County’s winningest head coach, is on the sidelines.

But the veiled simplicity makes it arguably harder to stop: The same handful of players, the same execution, the same sweeps and counters and dives, death by 1,000 paper cuts that has for years more than held its own as other offensive fads have come and gone.

So when diagramming against it this week, Haverford didn’t have the most ground to cover. But the plan the Fords concocted was the perfect counterpoint, a few simple solutions that worked wonders.

Haverford held Strath Haven to 143 yards of offense in posting a shutout and removing the zero from the Panthers’ loss column in a 24-0 Central League win Friday night.

“We’ve got perfect guys in perfect spots,” Haverford linebacker Will Higson said. “It’s all about guys doing their jobs, and I think everybody did their job, and that’s why they scored zero points.”

Haverford held Strath Haven’s potent running attack to 122 yards on 44 carries, an average of 2.8 yards per carry. (Even if you disregard a botched punt snap that led to a big loss, the resulting gain of 139 on 43 carries is still just 3.2 per tote).

Considering that Strath Haven had four backs averaging seven or more yards per carry entering the game, it’s all the more impressive. So is how Higson and company’s confidence grew in direct relationship to the frustration on Strath Haven’s side of the ball.

Higson was a constant menace for Strath Haven ball-carriers. While that didn’t translate to a ton of negative-yardage plays, it meant that Strath Haven (4-1, 3-1 Central) was often confronted with multiple red shirts at the line of scrimmage. On 42 designed running plays, only seven went for more than six yards.

“All you’ve got to do is read your keys,” Higson said. “You read your key, it takes you directly to the play. It’s all about doing your job.”

“We just got outplayed on that side of the ball,” Strath Haven’s John Prochniak said. “… Usually we’re hitting those, so it’s frustrating.”

Justin Burgess made a juggling interception in the end zone in the third quarter, ending Strath Haven’s deepest march of the night with the only turnover the Fords caused. But much like the offense it stopped, Haverford’s defense didn’t need the sensational play. It was a succession of fundamental, hard-nosed denials in the trenches that kept Haven at bay and quelled its big-play potential.

“You’ve got to fire off the ball and shed your blockers, get out of the way, and keep contain,” defensive end Chasen Wint said. “Keep contain is the most important thing, keep the quarterback contained and let the linebackers fill gaps and make plays.”

The contrast between the offenses was stark. Haverford (3-2, 2-1) spread its attack with four wideouts, opening running lanes for Wint and quarterback Trey Blair to capitalize on. Blair got the scoring going in the first quarter on a zone-read keeper for 74 yards, finding a hole and outrunning would-be tacklers down the sideline.

“We know Trey, he’s a playmaker,” Wint said. “He gets the momentum going, and we build off of it, feed into and put everything we’ve got into it.”

Wint provided a big play on the first snap following one of Haven’s four punts, a 67-yard burst to paydirt in the third quarter. Wint carried 18 times for 166 yards.

Add in Shane Moseley’s nine-yard, pinballing dive into the end zone in the second quarter and a 32-yard field goal by Ryan “Beef” Wellington just before halftime, and Haverford had more than enough offense.

Prochniak led Haven with 85 yards on 19 carries. Ibo Pio was hemmed in for 12 carries and 36 yards, and neither Jaris Adams (four carries, eight yards) nor Evan Blake (seven for 12) made much headway. Jack Ryder was 3-for-8 passing for 21 yards.

It added up to disappointment for a team that had averaged 41.8 points in its four wins.

“We can improve,” Prochniak said. “We’re going to see what we did wrong and get better from it. … We have homecoming next week against Marple, and we don’t ever want to have this feeling again, so you can bet we’re going to get better for next week.”

The Fords are moving their momentum in the other direction. They’ve allowed just seven points in a three-game winning streak, a potent riposte to two losses to open the season.

“We started out slow,” Wint said. “So we knew we had to stick together. We know what we can do it, and we have that one-man mentality. Every week we look to get better.”