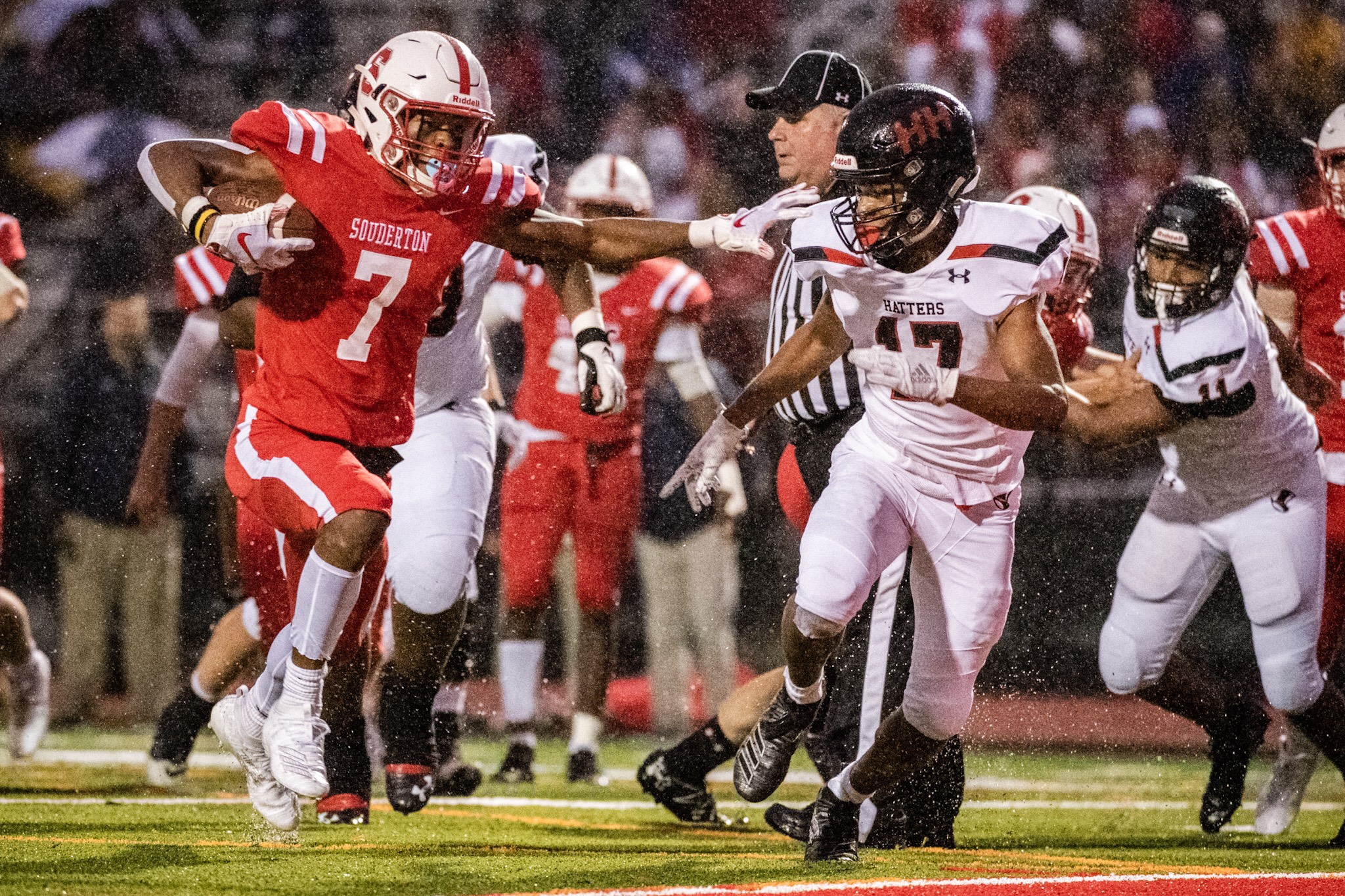 Souderton and Pennridge hit head-on at the midway point of the season, as Big Red meets the Rams in a key Suburban One League Continental Conference clash Friday night at Souderton.

Big Red looks to stay unbeaten and move to 5-0 for the first time since 2006 while the Rams try to snap a three-game losing streak and improve to 2-3.

Souderton opened up its conference schedule with a 17-7 victory over William Tennent last week while Pennridge fell to North Penn, 37-14.

DeAndre Wakefield continues to be a force at running back for the Indians, displaying tough running as well as his breakaway speed. Taj Utsey is emerging as a strong, reliable runner for the Rams. He found the end zone last week.

“He did a real good job,” Rams coach Cody Muller said. “He’s a kid that has stayed the course throughout. He’s a senior now and I told him, ‘just trust it. Keep going,’ and he finally did it. He looked good (Friday).”

In one of the oldest rivalries around, the two teams again went down to the wire last season.

Big Red would hold on for a wild 38-33 victory over the Rams. The healthy rivalry has grown even deeper the last two seasons, as Muller is one of Big Red coach Ed Gallagher’s former players.

Said Gallagher after last year’s clash: “(Cody) has them believing. Their kids really like him and I think it’s gonna go well.”

The game will be broadcast live on WNVP, 98.5 FM, and can be followed on Twitter @mpcabrey.

The following is a game-by-game preview for Week Five.

Methacton at Boyertown
Time/Place: Friday, 7 p.m., at Boyertown.
Records: The Warriors are 2-2 overall and 0-0 in the PAC Liberty. The Bears are 1-3 overall and 0-0 in the PAC Liberty.
Last Week: Methacton lost 14-0 to Pottstown. Boyertown lost 49-13 to Berks Catholic.
Players to Watch: Mike Torcini will look to burst through the running lanes for Methacton. Jamison Moccia helps man the secondary for the Bears.
Prediction: Methacton 24, Boyertown 16.

Pennridge at Souderton
Time/Place: Friday, 7 p.m., at Souderton.
On the Air: The game will be broadcast live on WNPV, 1440 AM and 98.5 FM, and live online at wnpv1440.com.
On Twitter: @mpcabrey.
Records: Souderton is 4-0 overall and 1-0 in the SOL Continental. Pennridge is 1-3 overall and 0-1 in the SOL Continental.
Last Week: Big Red stayed unbeaten with a 17-7 win over William Tennent. Pennridge fell to North Penn, 37-14.
Players to Watch: DeAndre Wakefield has been getting to the end zone multiple times for Big Red in the Wing-T attack. Both Taj Utsey and Brayden Landherr found the end zone last week for the Rams.
Prediction: Souderton 28, Pennridge 20.

William Tennent at Central Bucks West
Time/Place: Friday, 7 p.m., at Central Bucks West.
On Twitter: @khunter10.
Records: The Panthers are 2-2 overall and 0-1 in the SOL Continental. The Bucks are 4-0 overall and 1-0 in the SOL Continental.
Last Week: Tennent fell 17-7 to Souderton Area. West was on the winning end of a 42-28 decision against CB South.
Players to Watch: Tom Santiago is a tough runner for Tennent. Jack Fallon racked up a whopping 261 rushing yards last week in the win over South.
Prediction: Central Bucks West 27, William Tennent 19.

North Penn at Central Bucks East
Time/Place: Saturday, 11 a.m., at CB East.
On Twitter: @khunter10.
Records: North Penn is 3-1 overall and 1-0 in the SOL Continental. East is 3-1 overall and 0-0 in the SOL Continental.
Last Week: The Knights won 37-14 over Pennridge. The Patriots lost 21-14 to Pennsbury.
Players to Watch: Khalani Eaton keeps scoring in bunches for North Penn in the ground game. Wide receiver Anthony Cassidy can get deep for East.
Prediction: North Penn 28, Central Bucks East 17.