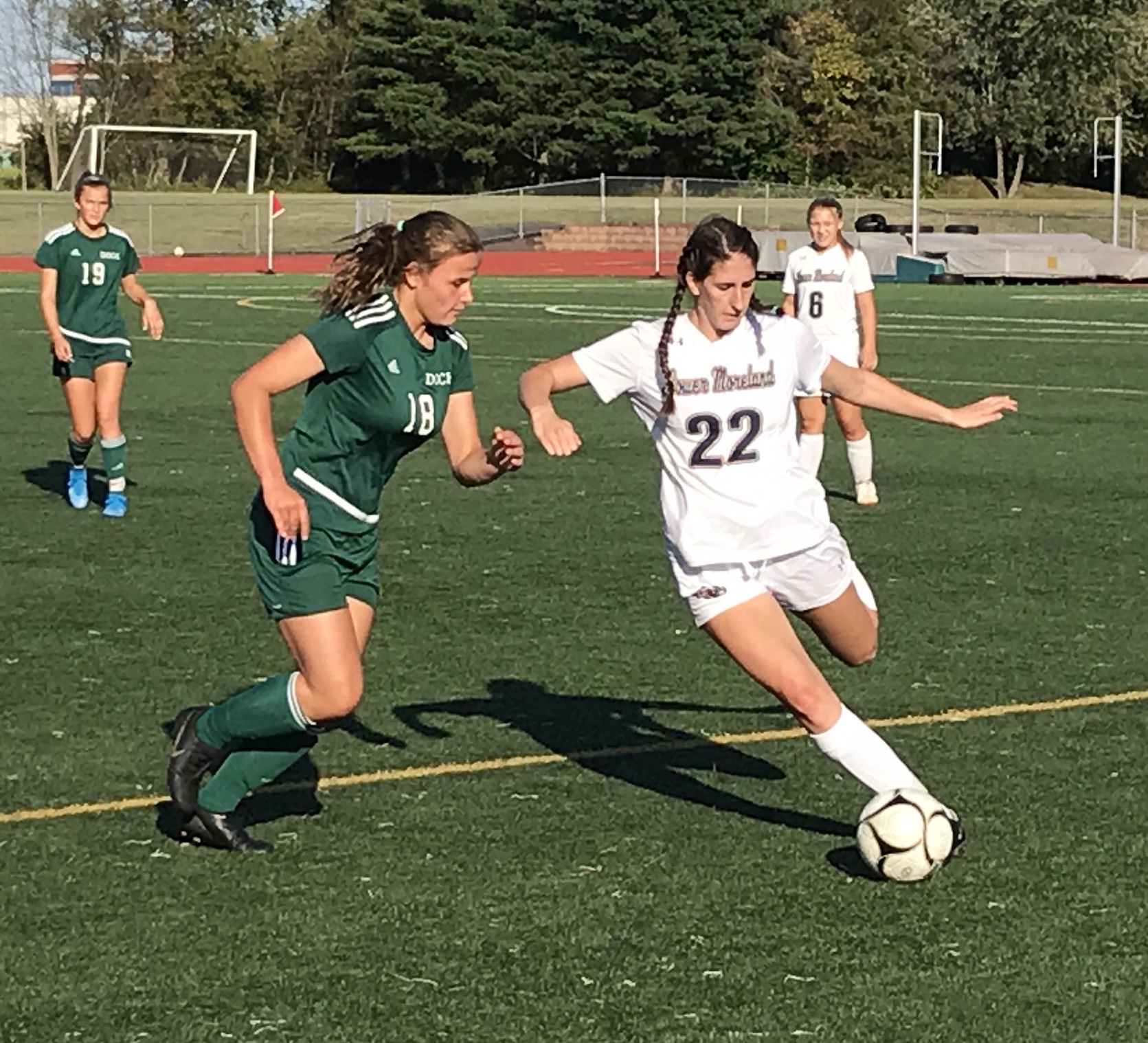 But the Lower Moreland senior’s fortunes flipped completely in her favor Thursday afternoon against Dock Mennonite. Castor struck for four goals in the Bicentennial Athletic League girls soccer contest as the Lions rolled to a 6-0 victory over the host Pioneers.

Castor collected a pair of goals in each half. She sent Lower Moreland out to a 2-0 lead, had a hat trick two minutes into the second half then capped her offensive output 10 minutes later by finishing a run into the box.

“She was quite a player and you know every team has that one, that one player and she was their player,” said Dock coach Stacey Vaitis of Castor. “And she did her job. She did what she was supposed to do and we have to try be prepared ahead of time to know who’s going to be the threat.”

GIRLS #SOCCER: @nicole22castor tracks down a through ball from Phoebe Lynch, skips around the Dock goalie and scores to put @LMTSDAthletics up 2-0 1st half. pic.twitter.com/6XopJjnKjW

Sara Matraku and Demmi Fox had the other goals for Lower Moreland (6-2-1, 4-1-0 BAL Independence), which pressured the Pioneers’ goal throughout and could have added a few more to its tally if not for a handful of shots just off-target and 15 saves from Dock keeper Laura Frederick.

“They kind of kept a high line most of the game,” Castor said. “So we would just have our center mids try and just chip the ball over and have our girls run onto it, which was working pretty well.

Dock Mennonite (3-2-0, 3-1-0 BAL Constitution) opened the season with three straight wins but has hit a rough patch this week with Thursday’s loss coming after a 5-0 nonleague defeat to Upper Moreland Monday.

“I think we’re just kind of in a slump right now,” said Vaitis, who is in her first season at Dock. “And I think we had a long team-bonding moment and we’re hoping to come back tomorrow ready to go, fix what we need to fix. It’s little things here and there, nothing huge but we’ll be ready tomorrow. Team unity, team chemistry  we got to work on that and once we get that jelling we’ll be good to go.” Dock came close to pulling even shortly after Castor made it 1-0 at 37:17 in the first half but Emma Kratz’s shot knocked off the left post. Kratz had another chance later in the half off a corner only for the sophomore’s shot to be hauled in by LM goalie Ceili Courduff.

“It’s tough when the ball’s getting back, we can’t clear the ball,” Vaitis said. “Laura was fantastic in net, she held us to the game as it was but We have to do more from midfield forwards. We have to try to support as a team, we have to work through it.”

Both teams are back in action Friday for nonleague matchups. Lower Moreland visits Council Rock North at 3:30 p.m. while Dock hosts Archbishop Carroll at 7 p.m.

“Everybody’s allowed to have bad days,” Vaitis said. “The past two games have been tough on our team but the only way is up.”

GIRLS #SOCCER: @nicole22castor slide a shot pass the keeper & into the opposite corner for her 3rd goal of the afternoon & a 4-0 @LMTSDAthletics lead 2nd half vs. Dock Mennonite. pic.twitter.com/yQ2rINGKSC

Castor has played soccer since she was 9 but her future is on the track with the senior looking to compete in heptathlon in college. Last year at the BAL Championships, Castor claimed first in the 100 hurdles, 300 hurdles and triple jump and also took silver in the high jump.

“Just been trying to work a lot in the summer to pick up on the heptathlon events cause it’s a lot of work,” she said.

Castor’s first goal Thursday was a right-place, right-time situation, as Frederick could not hold onto a shot from Fox and Castor jumped on the loose ball at the left post for a goal less than three minutes into the game.

“I just know how it feels when I run down and cross the ball and nobody’s there,” Castor said. “So I just wanted to finish that opportunity cause you never know what can happen.” The Lions made it 2-0 at 17:30 when Phoebe Lynch fought through a tackle then slid a through ball behind the defense that Castor chased down. Castor proceeded to skipped around the outcoming Frederick and tap the ball into the left side of the goal.

Matraku, who cracked a long-range effort off the crossbar in the first half, gave LM the 3-0 advantage at 13:11 before the break when she got free in the 18-yard box and had her shot slowly rolled into the net.

Castor struck for a third goal just 1:34 after halftime, dribbling into the left side of the box then slotting a shot past Frederick and into the opposite right corner.

Castor made it 5-0 on another run into the box. After holding off a defender, she just got a touch around Frederick — the Dock keeper getting a piece of the ball, but it still stayed in the path of Castor, who tapped it into the open net.

GIRLS #SOCCER: @nicole22castor finishes a long run with her 4th goal, putting @LMTSDAthletics up 5-0 2nd half vs. Dock Mennonite. pic.twitter.com/QOYLUsvjHk

“I just try and keep my touch close,” she said. “Cause usually I can tell where she is, so if I feel her on my right side I take it left and keep it close so I can just take a touch around the goalie.”

Fox registered the Lions’ final goal by getting just inside the box and lofting a shot just over the reach of Frederick.