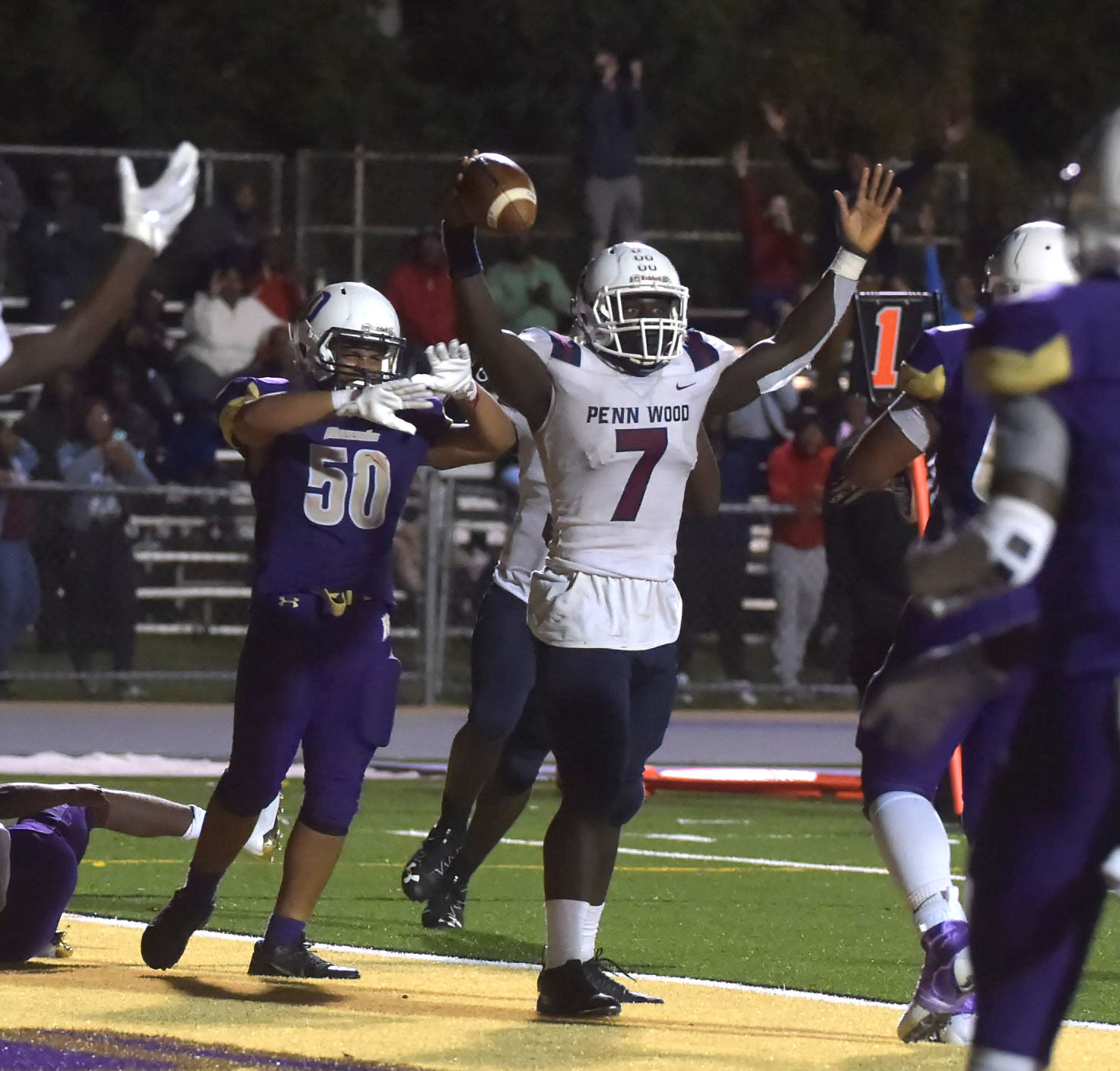 UPPER DARBY — After Penn Wood High lost its first game last week in what was expected to be a satisfying if not a championship season, Robert Dahn had one thought: There would be no more of that.

With that determination and with access to as much video as he could watch of the Patriots’ next opponent, Upper Darby, he went to work. Day after day. Night after night.

“Four or five hours,” he said. “Sometimes I watched an hour a day. Offense. Defense. Maybe I’d watch some special teams, too.”

In the Patriots’ bounce-back 44-25 non-league victory Friday at Upper Darby, Dahn’s diligence paid off. The senior linebacker and tight end caught an eight-yard scoring pass from Desman Johnson and corralled two interceptions, returning one 43 yards for a touchdown.

With a late flurry to wiggle away from the Royals, who’d built a 19-18 second-half lead, the Patriots put a rain-drenched loss at Northeast behind to improve to 3-1.

Upper Darby, which played most of the game without primary ball-carrier Kareem McAdams and versatile defender Dezham Peterson due to early injuries, dipped to 2-2.

“We watch the film to know what we have to improve on,” Dahn said, “and to make sure we don’t make the same mistakes again.”

In that, the Pats stuck mostly to the basics, trusting only Jordin Jones and quarterback Desmon Johnson to run the ball. Jones rushed 28 times for 240 yards, including a 37-yard scoring burst. Johnson ran for 71 yards and two touchdowns and passed for 140 yards and the scoring connection with Dahn.

For Upper Darby (2-2), quarterback Kevin Kerwood threw for 114 yards and ran for 45, connecting on a 65-yard TD pass with Darrell Farmer and a 33-yard scoring strike to Corey Robinson.

As for Patriots’ coach Ato Troop, he was not quick to sound the all-clear, particularly after being penalized 14 times for 110 yards.

“A lot of mistakes, a lot of penalties,” he said. “We probably should have been up a more in the first half. There were a lot of things that will be coached up and corrected.”

Johnson gave Penn Wood a 6-0 lead on a keeper with 8:11 left in the first, one play after Jones’ sprint to the Upper Darby 1. The Royals answered with 1:37 left in the quarter when Kerwood faked a handoff and ran four yards for a score.

Though unable to take advantage of an earlier fumble recovery by Jim Basler, the Royals persisted. And with 4:06 left in the first half, Kerwood fired the 33-yard scoring pass to Robinson, with Jake Amatucci’s kick opening a 13-6 lead. But with 1:55 showing before the half, Jones blasted 20 yards for a score to draw the Pats within 13-12.

Johnson had 74 passing yards in the first half.

Dahn’s eight-yard score gave Penn Wood its first lead late in the third, but Upper Darby persisted, with James Tuayamie racing 64 yards for a touchdown on the next play from scrimmage. A two-yard Johnson score late in the third, and Jones’ lengthy TD early in the fourth created some separation.

Upper Darby, however, did not easily budge, with Kerwood lacing the 65-yard touchdown pass to Farmer on third-and-nine from his own 35 with 7:57 left. But Johnson’s 19-yard keeper helped set up an eight-yard Jones touchdown. With the Royals nearing desperation, and with the Patriots ever alert, Dahn’s interception return with 4:21 to play dulled the suspense.

“I told the kids that as much as this is going to hurt, we are 2-and-0 in the Central League,” said Royals coach Rich Gentile. “And we have Marple on Friday. We don’t have to worry about any more non-league games. And kids are resilient. This week will be tough. But if we win on Friday, this one will be forgotten.”