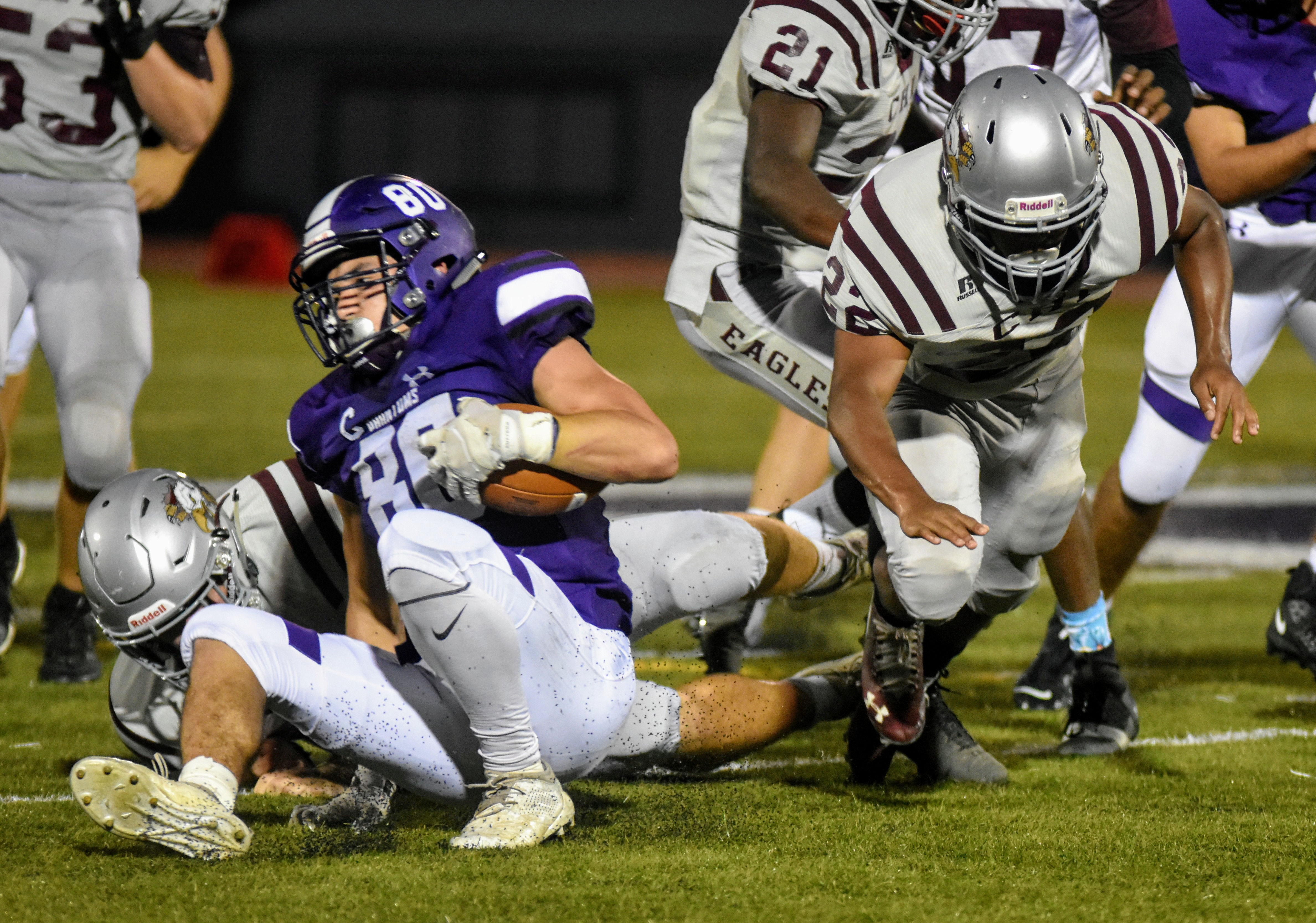 PHOENIXVILLE >> For first-year head coach Bob Brice and the Chichester High Eagles, Friday night proved to be a chance to rejoice and celebrate the first victory of the 2019 season after three setbacks.

For host Phoenixville and head coach Don Grinstead, it wound up being a night to reflect on too many penalties, turnovers, mistakes and missed opportunities. In general, what could have been.

After a scoreless first half, Chichester put two touchdowns on the scoreboard in the third quarter en route to a 13-6 non-league victory over Phoenixville at Washington Field.

Senior quarterback Nate Decenzi completed a 73-yard touchdown pass to junior running back Zaquon Bruton for the first score of the game. Later in the period, Decenzi found sophomore tight end Edward Swinton on a 6-yard TD pass that allowed the Eagles to close out the third stanza with a 13-0 lead

The Eagles were effective on offense and they swarmed to the football on defense as well. Chichester intercepted three passes in the first half alone. They were by Bruton, Zach Taylor and Antonio Perez. Linebackers Walter Jones Jr. and Kahsi Jones led the Eagles’ pressure and pursuit on defense. Jones and linebacker Saeeb Bradley shared a sack.

Phoenixville had success running the ball with Anthony Stevenson in the first half as he gained 67 yards on 14 attempts. However, the Eagles keyed on Stevenson in the second half, so the Phantoms tried to get Pizor and Davis more involved in the offense. Running back/linebacker Aidan Foley, who had a big night in Phoenixville’s first victory last week against Dobbins, is sidelined again for three weeks with an injury.

But in the mix were 10 Phantom penalties that cost them 95 yards.

“Mistakes and penalties,” said Grinstead. “Defensively, we played well, but we gave up big plays in the third quarter. They did run the ball. They had a lot of athletes. We knew that coming into the game.”

Grinstead said the penalties were uncharacteristic of the way his teams normally perform.

“We picked a bad night to have a bad night,” said Grinstead. “But our defense did play well.”

Chichester’s Antonio Perez is tackled by a host of Phantoms. (Barry Taglieber — For MediaNews Group)

Pizor had an interception from his linebacker slot on defense. Up front, Roman Ciaverelli and Matt Johnson shared a sack. Max Strunk was active in the secondary all night, along with Chase McDonnell, Davis and Stevenson. Sam Fisher and Shynir Jeffcoat made some plays at linebacker.

Brady Aselton returned to the lineup from an injury and aided the cause up front with Johnson, Daniel Gray, Ciaverelli, Solomon Ortiz, Liam McAdam, Nolan Martin and Luke Oscovitch.

Grinstead pointed out the large number of sophomores who are seeing significant playing time for the varsity Phantoms. They are being thrust into the fire, so to speak.

Notes >> Prior to the game, Phoenixville held a public community picnic adjacent to the field. … Then the Phantoms celebrated Operation American Pride Night to salute those who serve in the military and First Responders as well as local police, firemen and ambulance personnel. … Phoenixville tried to tie or pull the game out late in the second half with Pizor throwing passes to Davis, Fisher, Ignacio Ortiz, McDonnell and Johnson.