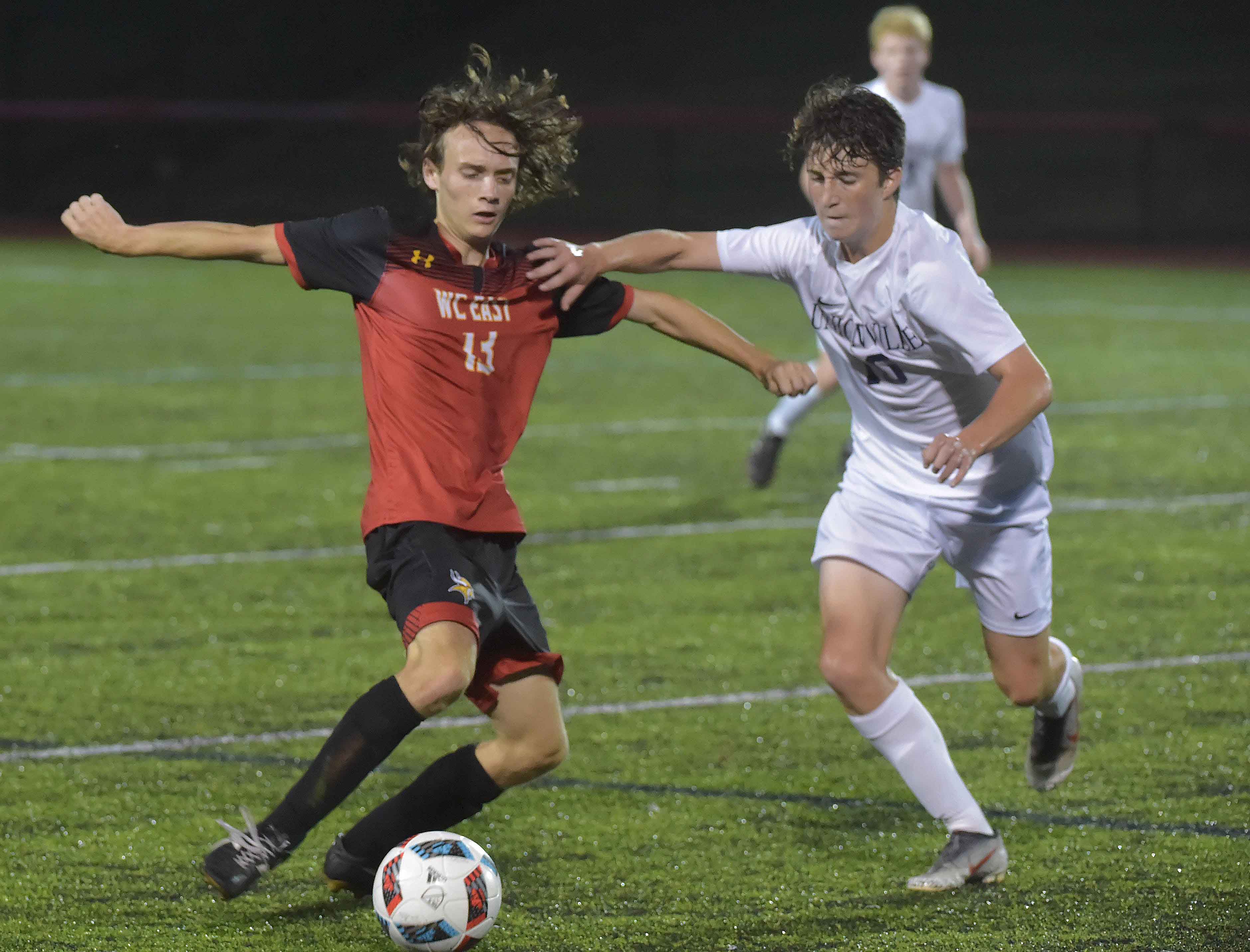 It ended in a scoreless draw through regulation and two overtimes. Just about the only difference was the way each goaltender viewed the physical 100-minute stalemate.

“This is a huge momentum booster. This could take our season to the next level,” said the Vikings’ Johnny Regester.

“It’s definitely disappointing,” countered Indians’ keeper Alex Dolce. “I think it was two points dropped, but there are some positive takeaways, like the second half.”

The disparaging comments are understandable because East (2-2-2 overall) was coming off a road loss at Bishop Shanahan on Tuesday. Unionville (6-0-1 overall) entered the outing without a loss, were No. 1 in the District 1 4A Power Rankings, and it’s starting defensive unit has yet to surrendered a single goal.

“We challenged the boys (Thursday) afternoon, to see what they are made of,” said Vikings’ head coach Charlie Dodds.

“(Unionville) is a team that I think is going to be in the state final. I told our boys they can measure themselves tonight. And every one of our kids played as hard as they could.”

At 2-0-1, the Indians are still the team to beat in the Ches-Mont league race, but East (1-1-1 in the league) never backed down, and kept Michael Hewes and company off the scoreboard.

“Our defense has been really good all season,” said Unionville head coach Rich Garber. “But we have to figure it out at the offensive end. We panicked at times when we had opportunities.

“I thought we didn’t match (East’s) intensity in the first half and they took it to us. In the second half, I thought we played very well.”

For both sides, there were a bunch of promising offensive combinations on the turf at Zimmerman Stadium that ultimately died in the teeth of opposing defenses. The Indians haven’t given up a single goal since the season opener, when the backups were on the field and it was 7-0.

“We’ve kept five clean sheets in a row now,” Dolce added. “The back four and the kids coming off the bench have been incredible. It’s definitely a good group.”

Neither side even managed a single corner kick until Unionville strung together four in the final 13 minutes of regulation. It was part of a late surge which also included blasts in the final five minutes from Anthony Zucchero, Kyle Ketterer and Alex O’Leary, but each one sailed over the cross bar.

“Our backs fell back, we gave (Unionville) too much space and we lost a little bit of the midfield, so we made an adjustment in the overtime,” Dodds explained. “When you are the favorite and it’s tied, you tend to try to do too much. As the underdog, you hope they make a mistake and you can counter.”

East finally earned a corner kick in the first OT, but the two 10-minute extra periods ended with neither side producing a prime scoring chance.

“When you play defense, and you work hard, it beats skill every time,” Dodds said. “We stayed focused, we were organized, and we had great leadership from Luke Albergo in the back.

“And Johnny (Regester) controlled his box. He has a huge up-side.”

Neither side scored in the first half, but the Vikings did have a 6-3 edge in shots on goal, and East had the two best chances. At the 16-minute mark Tyler Grenell got his head on the ball in front of the Unionville goal, but Dolce collected it. And in the final two minutes, Driss Benslimane had a bang-bang shot that went wide of the cage.

“We have some special players on the attack, but we have some things to work on. We’re only six games in, so I think we will figure it out,” Dolce said.

“We needed a game like this where we were pushed so the guys realize we have some work to do,” Garber added.

There is, however, little time for either side to worry about what could have been. The Vikings play powerhouse non-league foe Conestoga on Saturday, followed by Downingtown East three days later. The Indians will host West Chester Henderson on Tuesday.

“I am real proud of my boys, and hopefully we can build off of this,” Dodds said.

“We just talked about trying to build on this,” Garber added. “It’s not a loss. We still have control of the Ches-Mont if we win out.”