Owen J. Roberts moves to 4-0 with win over Upper Merion 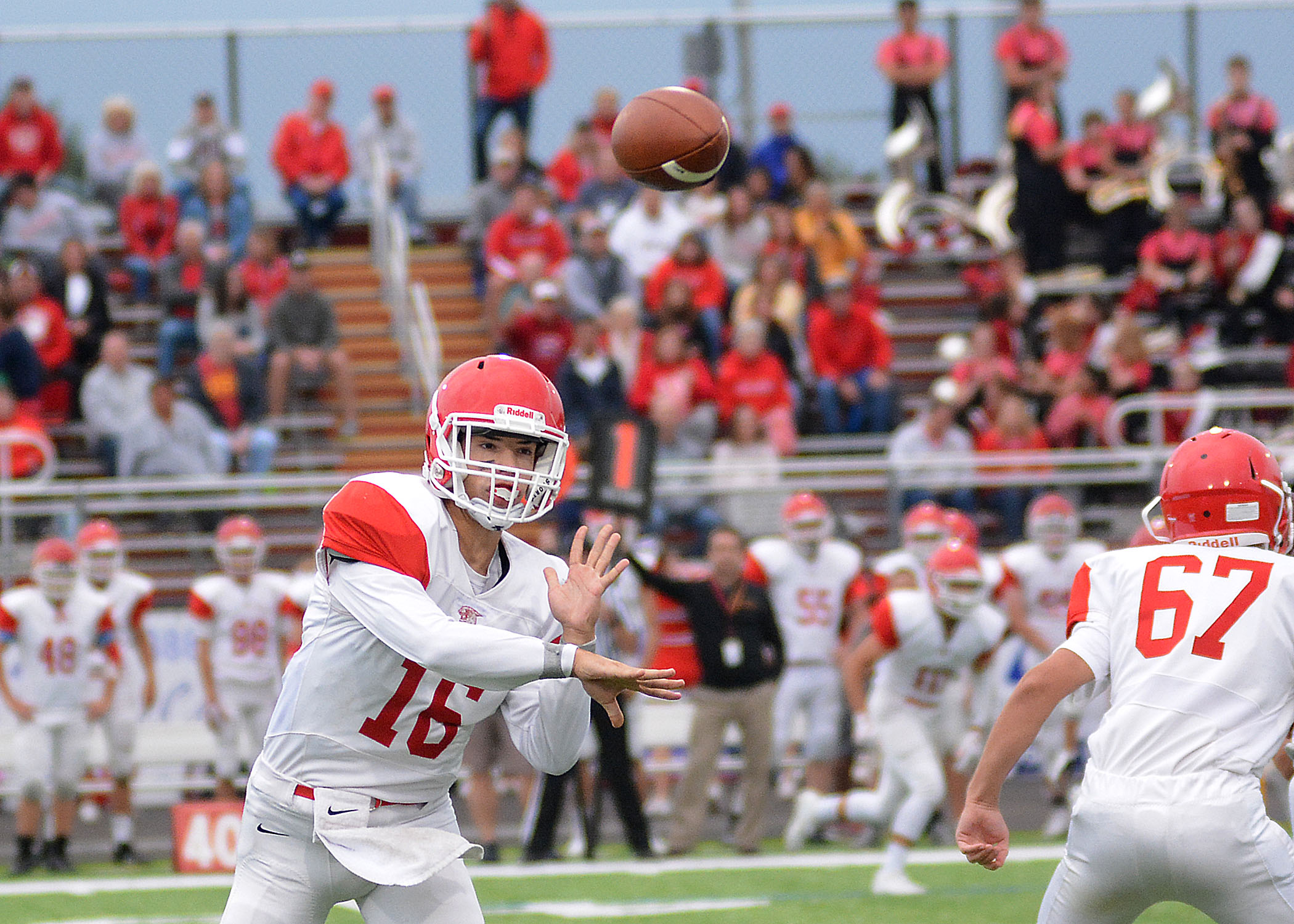 KING OF PRUSSIA >> To paraphrase his own head coach, Cooper Chamberlain spent a significant portion of Friday evening getting the living heck beaten out of him.

But when the chips were down, the Upper Merion defense couldn’t lay a hand on the Owen J. Roberts quarterback until it was too late.

Chamberlain’s nine-yard TD keeper with 3:22 to play sealed a come-from-behind 27-17 victory to keep the Wildcats (4-0) undefeated going into the start of Pioneer Athletic Conference play next week.

“That was the goal,” said Chamberlain after the final buzzer. “Anything to get to 4-0.”

The quarterback was hit on more than a few of his 19 passing attempts and carried the ball 16 more times in the contest. But the hits that really took a toll were on speed options with RB Josh Jackson. On several occasions, Chamberlain kept the ball as long as possible before pitching to Jackson, who rewarded the signal caller and his team with a career-high 135 yards and three rushing touchdowns.

“I love running the ball,” said Jackson. “I learned from one of the best (Marcus Martin, a first-team all-area running back at OJR a year ago) and I just want to do the job this year.”

But the price was paid by Chamberlain, who took a few bone-rattling hits just an eyelash after making the pitches to Jackson.

So on the decisive 4th-and-4 play from the Upper Merion nine-yard line, the Vikings’ defense overplayed the pitch to Jackson, allowing Chamberlain to scamper up the middle and plow through a tackle into the end zone to give OJR the final margin of victory.

“I knew that linebacker would flare out to Josh, because he was having such a big night,” said Chamberlain. “It paid off with the touchdown.”

You couldn’t blame Upper Merion, who’d been burned by Jackson for three early touchdowns and as the game wore on, several more runs that extended OJR drives and kept the Vikings’ defense locked on the field.

“That’s a 4-0 team, and we’ve got our hands full with them,” admitted Upper Merion head coach Victor Brown. “For our part, we need to stop hurting ourselves with mistakes.”

The first quarter couldn’t have started better for Brown’s Vikings, as quarterback Dale Clayton found Aaron Anderson down the sideline on a wheel route on the Vikings’ second drive to give Upper Merion a 7-0 lead. But the ‘Cats defense would stiffen, forcing the Vikings to rely on special teams for the remainder of their scoring output.

“Our defense set the tone for us,” agreed OJR head coach Rich Kolka.

Punting miscues ruled the second quarter, as UM’s Anderson cashed in a partially blocked punt for his second TD with 10:43 to play before the half. But Upper Merion returned the favor with a poor snap of its own, recovered by the Wildcats at the two-yard line and cashed in by Jackson for his second score of the night. A failed two-point conversion allowed the Vikings to maintain a 14-12 lead.

Charlie Reinhardt’s 37-yard field goal increased the margin to 17-12, but the Wildcats took advantage of a long completion to Jon Hannevig to cash in on Jackson’s third score of the half before the break. After the uneven opening 24 minutes, OJR felt fortunate to take a 19-17 lead into the locker room.

“It was a sloppy game all around,” said Kolka, “but we executed when we could. We certainly had other opportunities.”

One of those came in the third quarter, when another big hit saw Chamberlain fumble inches short of the Upper Merion goal line. Three plays later, however, the ensuing drive yielded only an OJR safety when Ian Sordilla and Kurt Sayers stacked up Upper Merion’s Anthony Swenda a couple yards deep in the end zone. The Wildcats took a four-point lead into the final stanza.

“That could have been a killer,” said Kolka. “But it was a grind-it-out game, and that’s what our defense did. Leading up to that safety, our offense put together a great drive. But they couldn’t finish it, so the defense did.”

Chamberlain put a frustrating passing night (7-of-19 for only 85 yards, his season low) behind him to contribute 57 yards rushing and the clinching TD. But his greatest contribution may have come on special teams. Excluding the second-quarter block, the senior punted four times for an average of just over 50 yards. One punt was muffed leading to Jackson’s second touchdown.

A season ago, Owen J. Roberts’ promising campaign came to a screeching halt after upset losses to Upper Merion and Daniel Boone.

The Wildcats exacted one measure of revenge with a 42-0 shutout of Daniel Boone in Week 2 of this season, and aimed to settle all 2018 business when they traveled to King of Prussia for a rematch with the Vikings.

While Friday night’s victory allowed the Wildcats to bury the bad memories of last season once and for all, the team won’t have much time to celebrate, as the focus shifts immediately to the upcoming Pioneer Athletic Conference Liberty Division schedule.

But the real story of the early season has been the Wildcats’ defense, which hasn’t missed a beat while replacing two All-Area performers from last season in defensive linemen Aidan Hayward and Arnaldo Montagano.

OJR began 2019 with back-to-back shutouts (a 28-0 victory over Conestoga preceded the win over Daniel Boone), and the defense was able to preserve last week’s 14-13 victory over Avon Grove, thwarting a Red Devils two-point conversion in the final minutes.

On Friday night, it was the secondary leading the way, as Matt Cutrone picked off a pair of passes while Hannevig added his third interception in as many weeks.

So are this year’s Wildcats destined for greater things? They won’t have to wait long to find out, as they open their Liberty Division slate next week with a visit to three-time defending league champion Perkiomen Valley. The combination of OJR’s fast start and its own Friday night loss to Downingtown West figures to garner PV’s full attention.

“We gotta play them either way,” said Kolka. “Might as well start off the (conference) season with them. I know they’re big, a physical team. We’ll get to work on them tomorrow.”

Meanwhile, Upper Merion dropped its second straight contest after an impressive 2-0 start of its own. Anthony Swenda ran for 126 bruising yards, extending numerous drives and spending much of the game as the sole source of Vikings offense after the opening TD pass to Anderson. Ty Lobban added 72 total yards (47 receiving, 25 rushing).

Coach Victor Brown views next week’s PAC opener at Phoenixville as a chance to start anew.

“We’ve done a lot in the offseason to help ourselves overcome adversity,” he said. “We’re excited to get into conference play, because we know we can compete with anybody. “At the same time, if we don’t do what we’re supposed to do, we’ll be right back here at 0-1 next week.”