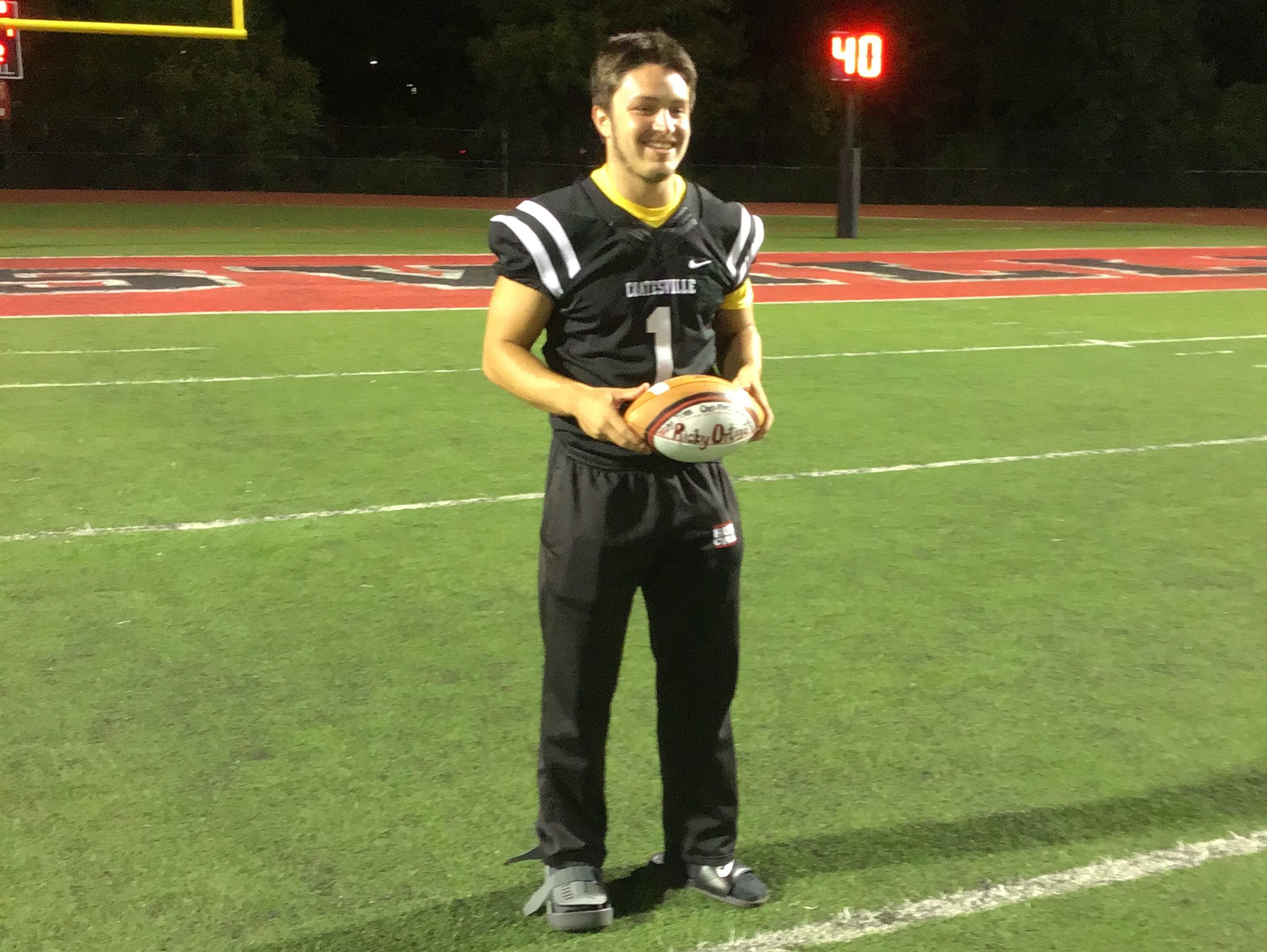 CALN >> Coatesville quarterback Ricky Ortega has achieved many things in his three-plus years as the Red Raiders’ starting quarterback.

Friday night at Red Raider Stadium, Ortega threw for 74 yards in a little over a quarter of action, and became the all-time leading passer in Ches-Mont League history, eclipsing the 8,162 yard record set by Downingtown East quarterback Pat Devlin from 2001 to 2005.

Ortega played sparingly Friday because he is still nursing an foot injury sustained last week against Cumberland Valley. The Red Raiders were able to rest Ortega Friday, as they rolled over West Chester Henderson, 55-17, in a nonleague affair.

“It is a great accomplishment and I feel really blessed to have the record,” Ortega said. “But, I am about my team and getting better each week. Our goals are team goals. First is to win the Ches-Mont :eague. Second is to win the district again and get to states, and this year to win the whole thing. A lot of people helped me attain this record.”

Coatesville (2-1) got rolling early as Dapree Bryant ran the opening kickoff down the left sideline 84 yards to give his team a 7-0 lead. The return seemed to take some of the juice out of West Chester Henderson (1-3), which was coming off its first win in nearly two calendar years.

Before the first quarter was over, the Red Raiders had built their lead to 21-0, and it looked like Coatesville could name its score. On defense, John Ruttman and Jordan Engler were blowing up everything the Henderson offense had to offer.

Ortega broke the record on a three-yard completion to Artie Burgess and then he hit Bryant with a 10-yard touchdown pass to make it 34-0, and that was it for Ortega and most of the Red Raider starters, as Coatesville head coach Matt Ortega pulled most of his big guys out before halftime.

“We have a lot of guys who are hungry to play football,” Coatesville head coach Matt Ortega said. “They practice hard all week and they gained some valuable experience tonight. We are going to have to count on a lot of young guys later in the season and they did well tonight.”

The Warriors couldn’t muster any offense against Coatesville, but West Chester Henderson scored a touchdown in the second period when Jon Hamm picked off a Ryhel Eubanks pass and rumbled 12 yards to score and make it a 34-7 game.

The Red Raiders showed their explosiveness on the next two scores as Eubanks made up for his interception, throwing a pretty 57-yard touchdown pass to Abdul Sabur Stewart for a score. Just before the first half ended, Amir Kennedy weaved his way through the entire Henderson team for an electrifying 85-yard punt return that made it 48-7 Coatesville at halftime and put the mercy rule in play for the entire second half.

The Coatesville second- and third-team defense played pretty well against the Warriors, allowing just 10 second-half points, and the fans caught a glimpse of the future as Harrison Susi, a freshman quarterback, came in the game in the fourth quarter and went five for five passing, and leaped into the end zone on a 10-yard touchdown run.

“Ever since he was little we knew he was different,” Matt Ortega said. “And as a family we are lucky to be a part this community and all the tradition and pride the people have here. We are a family here and I am so proud to be a part of it and so is Ricky.”