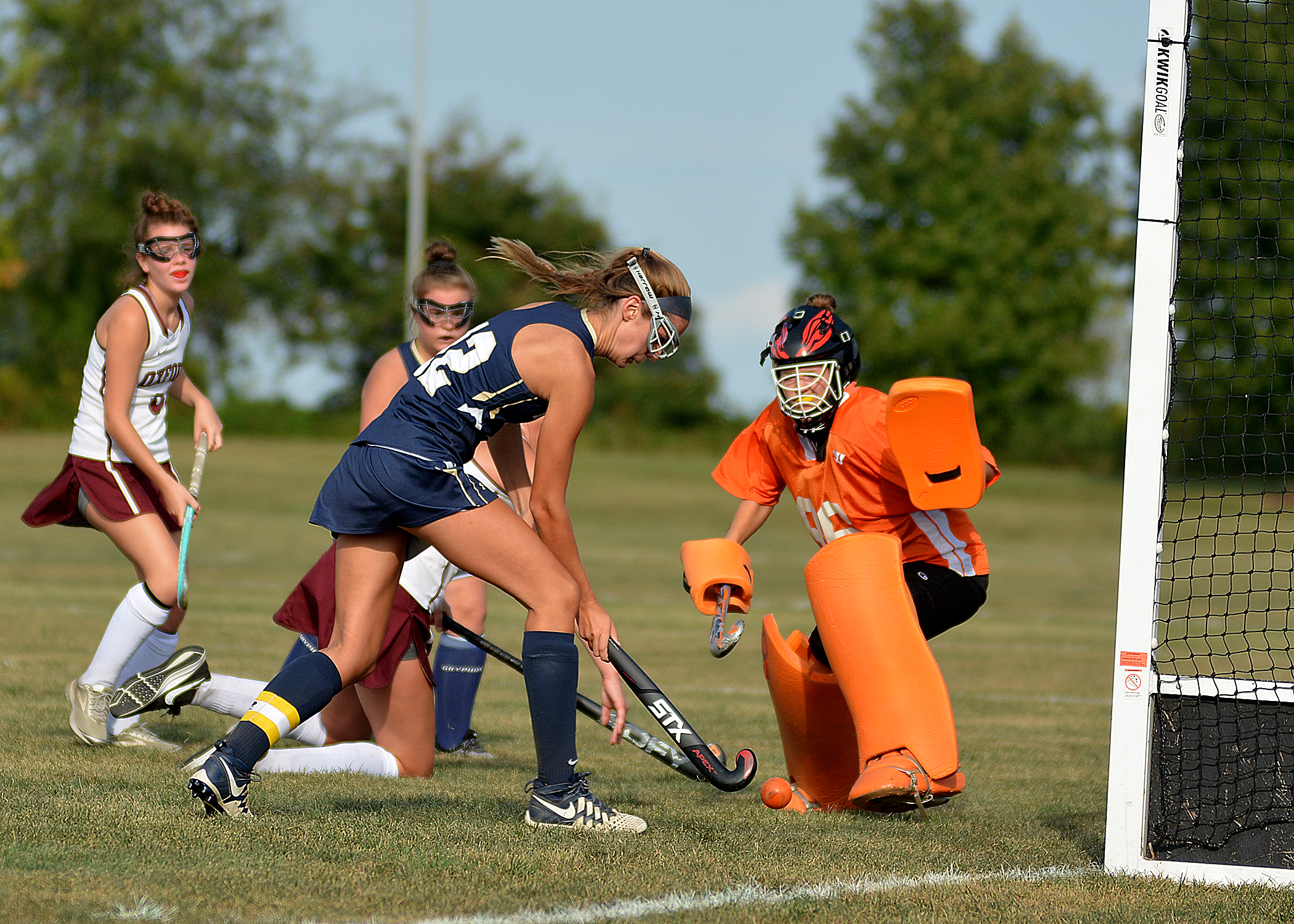 OXFORD–Playing field hockey on grass can be a tricky proposition for those unaccustomed to playing on it rather than turf. Play tends to be slower, and balls can take some strange hops.

The Rustin Golden Knights (3-2) seemed to have little trouble adjusting to playing on Oxford’s grass field Tuesday afternoon, notching four goals in the first half, and tacking on another three on the way to a 7-2 victory over the Hornets (0-2).

“We were a little concerned about the grass coming in,” said Rustin coach Amy Walsh. “We had a tough loss yesterday to Owen J Roberts, so we came in just saying to not let the grass get to us. I’m really pleased with the way they responded after a loss with the way they played today.”

The first half was virtually all Rustin. The Hornets managed to force a couple of penalty corners but only the Knights found the back of the cage. The first came when Lexi Haws assisted on a goal from Katie Stubits.

Then Christine Ditizio sandwiched a pair of goals around one from Reese Devlin, and the Knights were up 4-0 headed into the break.

“We’re a really young team, having graduated seven starters from last year, plus me coming in as a new coach,” said Walsh. “We’ve definitely had some adjustments to make, but we’re coming out strong and fixing things when we see they need to be fixed.”

The Hornets didn’t just pack it in, and really pushed Rustin in the second half. Oxford forced the first five penalty corners of the second half, finally getting on the board by converting a corner on a goal from Chloe Campbell and assisted by Keylee Johnson at the 17:36 mark. Six minutes later, Oxford cut the lead in half, getting a goal from Haley Snowden with ten minutes to play.

“The second half showed the way these girls are capable of playing,” said Oxford coach Karly Belford. “This is a whole new squad, really, with nine seniors graduating last year. We’re playing with intensity and getting corners, we just have to start finishing.”

Feeling the pressure, Rustin responded with three more goals over the final ten minutes. Stubits completed a hat trick with another pair of goals over the next three minutes, then Morgan Becker rounded out the scoring, finding the back of the cage with a little less than two minutes to play.

“We always practice on turf, and it’s easier to make clean hits and it’s faster,” said Stubits. “But we still have strong players, so we just hit our drives, played hard and pushed through it. We are really coming together as a team like we never quite did in the past. More of a unit, and together.”