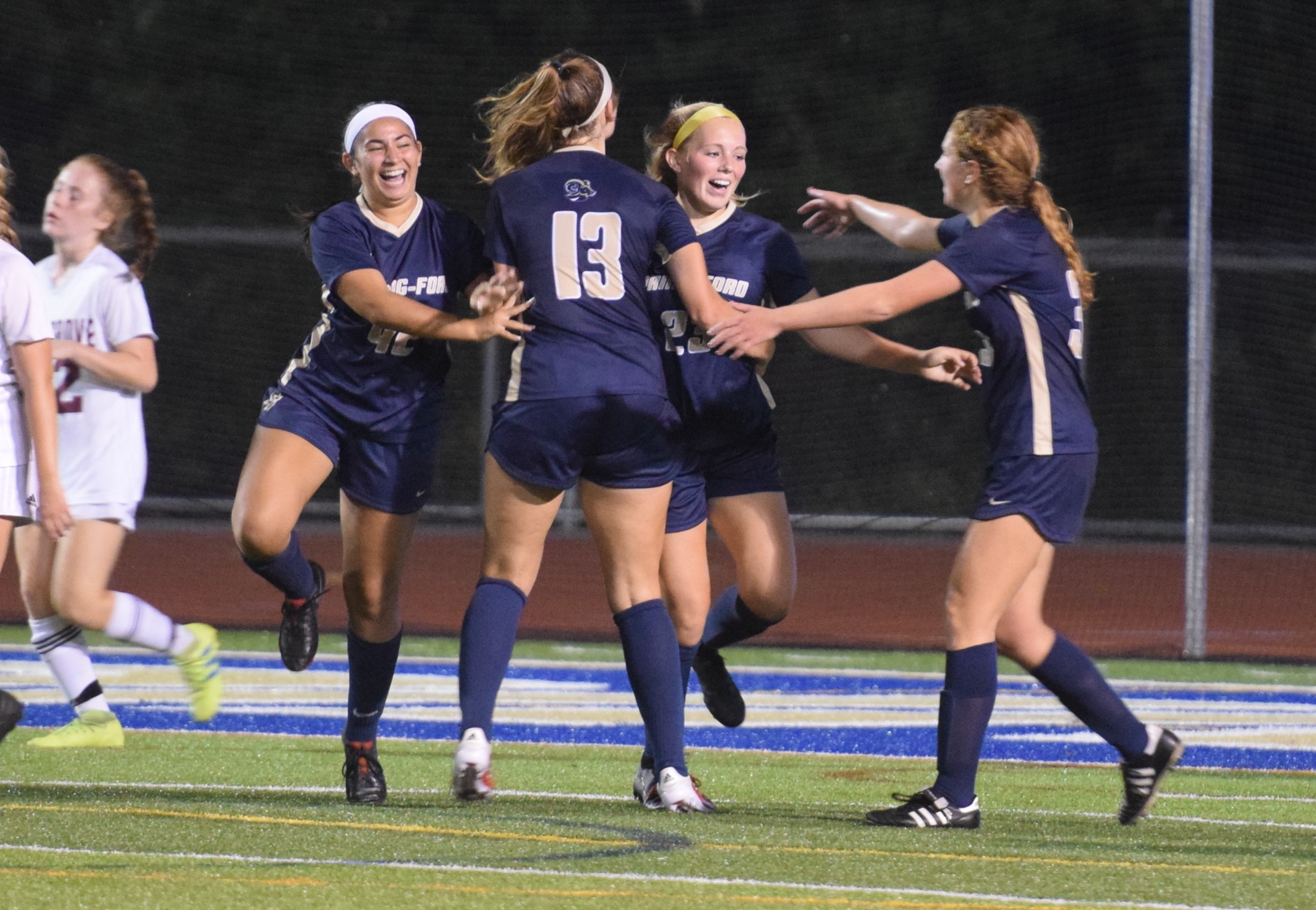 ROYERSFORD >> Hope Flanegin was under the weather. So was the Spring-Ford girls soccer team’s play through six minutes of their game against Pottsgrove Tuesday night.

A dream start for the Falcons put the Rams in a two-goal hole before the game had even settled in.

But whether it was coughing fits and raspy voice for the ill-but-ever-present junior midfielder or a sleepy start from the team at large, Spring-Ford pressed on.

Flanegin’s first-half finish gave the Rams life and their perseverance paid off with a three-goal second half that earned Spring-Ford a 4-2 victory over Pottsgrove in an entertaining rematch of last year’s Pioneer Athletic Conference semifinal Tuesday night at Coach McNelly Stadium.

“I never felt like we had no chance,” Flanegin said of the two-goal deficit. “I knew that if we focused and tried to forget about those goals and start over, I knew we would be able to get back and score.”

Senior midfielder Ella Curry scored twice, the game-tying goal with 28:31 remaining on a cross from Emily Higgins and the game-sealing goal with 11:30 to play on a one-timer to the near post from a Flanegin centering pass.

Higgins scored the go-ahead goal for the Rams with 19:27 to play after Felicia Vagnozzi headed down a long Ally McVey cross. Prior to that, Flanegin’s opening goal came on a cross from the end line by Ally McVey with 23:11 left in the first half.

“I’m really proud of us because going down 2-nothing is mentally tough,” said Curry, a returning Mercury All-Area first teamer. “But I think we kept calm and played our game. We had some spurts that we were panicking, but we figured it out.”

Pottsgrove’s stunning start came on a beautifully-struck left-footed one-timer from Hailey Strain after being played in by Skylar Glass just 4:30 in. Less than two minutes later, Glass hit from 30 yards for a 2-0 Pottsgrove lead.

It was the second straight meeting between the sides that the Falcons, last year’s PAC Frontier Division champion, gave Spring-Ford a serious run only to fall short. In the 2018 PAC semifinal, the Rams took it in overtime, 3-2.

With their 2-0 lead, the Falcons had the natural reaction to try to protect it.

“Obviously a dream start against a team like that with solid players all around,” Pottsgrove coach Steve Mellor said. “We just kind of collectively, for whatever reason – and this isn’t a function of this group – we took our foot off the gas. It looked like we were dropping deeper. IF we could have gotten up 3-0, it’s not that we would have finished them off, but it’s a different game. I thought we could have pushed a little bit.”

That allowed the Rams and their formidable midfield trio of Curry, Flanegin and Molly Thomas to begin controlling the game. That’s a dangerous game to play as teams in the PAC and beyond know and will continue to find.

“Hope, Molly and I have been playing the past three years for high school and played together when we were younger,” Curry said. “I think we’ve done a good job. We switch around positions a lot. The chemistry there helps a lot.”

While last season was a transitional one under new coach Mo Hadadi, the Rams look more like the perennial power the program has become in the last six years.

“This year we’re just taking the momentum we had last year,” Curry said. “We have a lot of people stepping up for us – Riley (Wallace), our keeper, has been stepping up big for us – and overall everyone is putting the effort in at practice and it’s translating to the field.”

Despite the loss, Pottsgrove remains the favorite in the Frontier and looks like a contender in the PAC landscape, a statement that would have been unthinkable a handful of years ago.

“Four year ago we’re losing that game 6-0. And now it’s a game,” Mellor said. “I like that and the girls play to a certain level and it’s fun, but now we need to use it and push to get better.”

But at the final whistle Tuesday night, the Falcons were the ones feeling ill.

“They’re not happy,” Mellor said. “We were definitely up for it – the start was fantastic. I know they’re mad, but I told them to ride home on the bus, sleep on it and tomorrow’s a new game. This should just be motivation. Playing in these games against that type of team makes you better.”